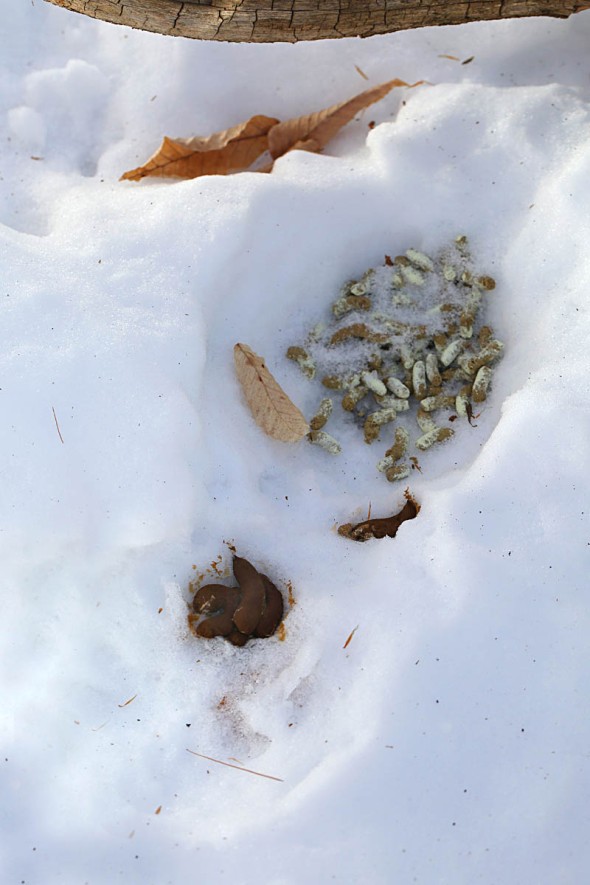 Unlike much of the Northeast, central Vermont has only a few inches of snow on the ground. These conditions can affect all forms of predators and prey both negatively and positively, from exposed mice and voles to easily-satiated hawks and owls. In the case of Ruffed Grouse, which seek shelter on cold winter nights by diving into the snow, less than 10 inches of snow can spell disaster. In their snow caves they are hidden from view and well insulated (where it rarely drops below 20°F.).  A lack of snow can be life-threatening for grouse if the temperature drops too low for too long. Unable to create a sheltered cavity in the snow,  Ruffed Grouse bed down on top of it, often close to the base of a tree where there may be some shelter from the wind. Fortunately, most nights have not been extremely cold thus far this winter.

After the grouse departs in the morning, you often find scat where it bedded down. Grouse scat comes in two forms, one a dry, fibrous cylindrical pellet with a white-wash of uric acid at one end, and the other a softer, darker brown plop. The vast majority of a grouse’s diet (buds, twigs, leaves, catkins) goes directly through its digestive system and forms the dry, courser scat. Finer (and more nutritious) material such as the cambium layer of woody plants enters the caeca, two specialized pouches, before passing through the large intestine. The caeca contain bacteria which break down cellulose and produce the more digested, and therefore more liquefied, scat (see foreground in photo). 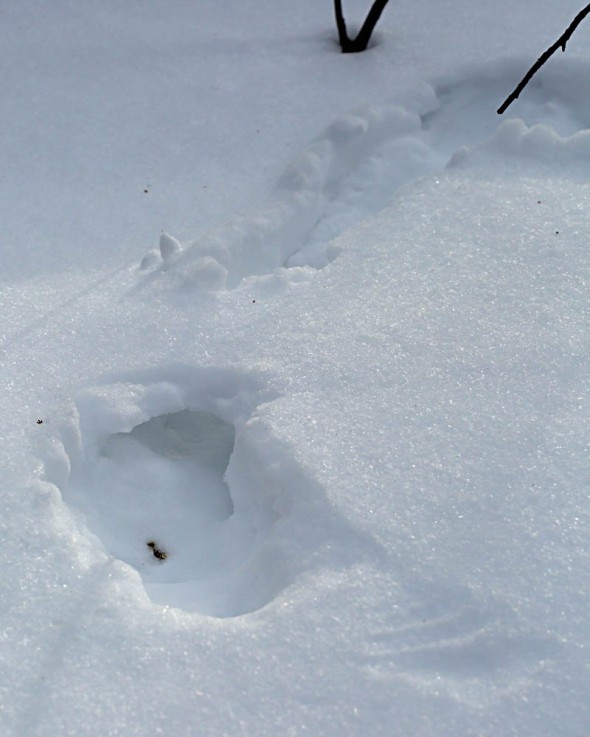 There are about five or six inches of new powdery snow on top of an icy crust in parts of central Vermont now, with more to come soon. It is common knowledge that ten inches of snow are necessary for Ruffed Grouse to dive into and burrow under the snow in order to make an insulating nocturnal snow roost. With only five inches of snow, a grouse still seeks shelter, but somehow it knows not to dive into the snow from the air. Rather, it lands on the surface of the snow, and then walks along making a groove in the snow as it goes, until it decides to rest for the night.

Several such resting spots were apparent today at the base of trees — slight depressions fully exposed. The grouse that made the snow roost in this photograph shuffled through the snow and then scrunched down without breaking the surface of the snow where it settled for the night, so that it had an inch or two of snow over its body – hiding it from predators, if not providing much insulation. In the morning, after defecating, it departed, not bursting out of a snow bank as it would if there were a lot of snow, but instead lifting off in plain view, leaving faint wing prints on the surface of the snow.