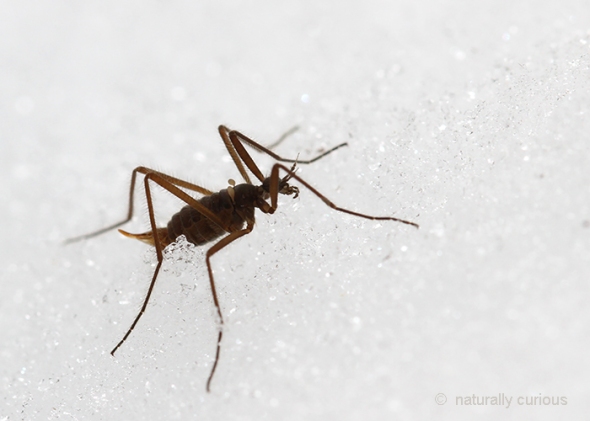 It always comes as a surprise to see tiny creatures moving nimbly over the surface of the snow. However, there are quite a few insects and spiders that do, thanks to the glycerol that they produce in their body fluids that keep them from freezing. The Snow Fly (Chionea sp.) is a type of wingless crane fly.  Most likely its lack of wings is due to the fact that at sub-freezing temperatures it would be very hard to generate enough energy for maintaining flight muscles. They (along with other flies, mosquitoes and gnats) do have two vestigial wings called halteres, the little knobs on the fly’s thorax. They inform true flies about the rotation of their body during flight, and are thought to act as sensory organs for the flightless Snow Flies.

Throughout most of the year Snow Flies can be found in leaf litter, but come winter the adults emerge, mate and lay up to 200 eggs. The lack of predators such as dragonflies and most insect-eating birds makes winter a relatively safe time for Snow Flies to be out and about. Their life span is about two months, during which time they drink by pressing their proboscis against the snow, but they don’t eat.   (Snow Fly in photograph is a female, measuring less than ½”.)