Naturally Curious wishes you a…

Snowy Owls, inhabitants of the Arctic, are not only well camouflaged but well insulated with their feathers. Their exceptional density make Snowy Owls North America’s heaviest owl.  Weighing in at about four and a half pounds, they are about a pound heavier than Great Horned Owls and almost twice the weight of Great Gray Owls (North America’s tallest owl).

Most species of owls have densely-feathered legs (exceptions being owls living in southern regions such as Barn Owls, Burrowing Owls, and some tropical species).  Snowy Owls have exceptionally thick feathering on their legs and feet. The toe feathers of a Snowy Owl are the longest known of any owl, averaging 1.3 inches – in comparison, the Great Horned Owl’s (which has the second longest toe feathers) are a mere .5 inch. In addition to their insulative quality,  the feet and leg feathers may also serve to sense contact with prey and to protect against prey that might bite when seized.

Beneath the two outer eyelids birds have a translucent nictitating membrane, sometimes called a “third eyelid.”  This membrane sweeps across the cornea from the inside corner of the eye to the outer edge of the eye. It moistens and cleans the cornea, especially in flight.  It is also drawn across the eye when there is a chance the eye might be scratched or damaged such as when capturing prey, flying through brush or feeding their young.

In summation, one could say that owls have three eyelids for each eye: one for blinking (upper), one for sleeping (lower), and one for keeping their eyes clean and protected (nictitating). (Photo: Snowy Owl sleeping, with lower eyelids raised.)

Naturally Curious is supported by donations. If you choose to contribute, you may go to http://www.naturallycuriouswithmaryholland.wordpress.com&nbsp; and click on the yellow “donate” button

The Northeast loses a lot of songbirds to migration in the fall, but it gains a few as well, one of which is the Northern Shrike (Lanius excubitor).   As days shorten and temperatures drop, this tundra-nesting bird migrates southward into southern parts of Canada and northern U.S., arriving in October and November on its wintering grounds. In some areas Northern Shrike movements and winter numbers have been associated with the movements of Snowy Owls and Rough-legged Hawks.

The Northern Shrike is highly unusual in that it is a predatory songbird. Birds, mammals and insects are preferred over nectar, nuts and seeds. During the winter it preys mainly on small mammals (voles, mice, shrews) and birds. The Northern Shrike often kills more prey than it can immediately eat or feed its young, storing the excess food to eat later when available living prey may be scarce. The manner in which it stores this extra food is what gave it the name “butcher bird;” it often impales prey on a thorn, broken branch or even barbed wire, or it wedges prey into narrow V-shaped forks of branches, where they hang until reclaimed by the shrike. (Photo by Mary Sue Henszey)

Snowy Owls Starting Their Return To The Arctic 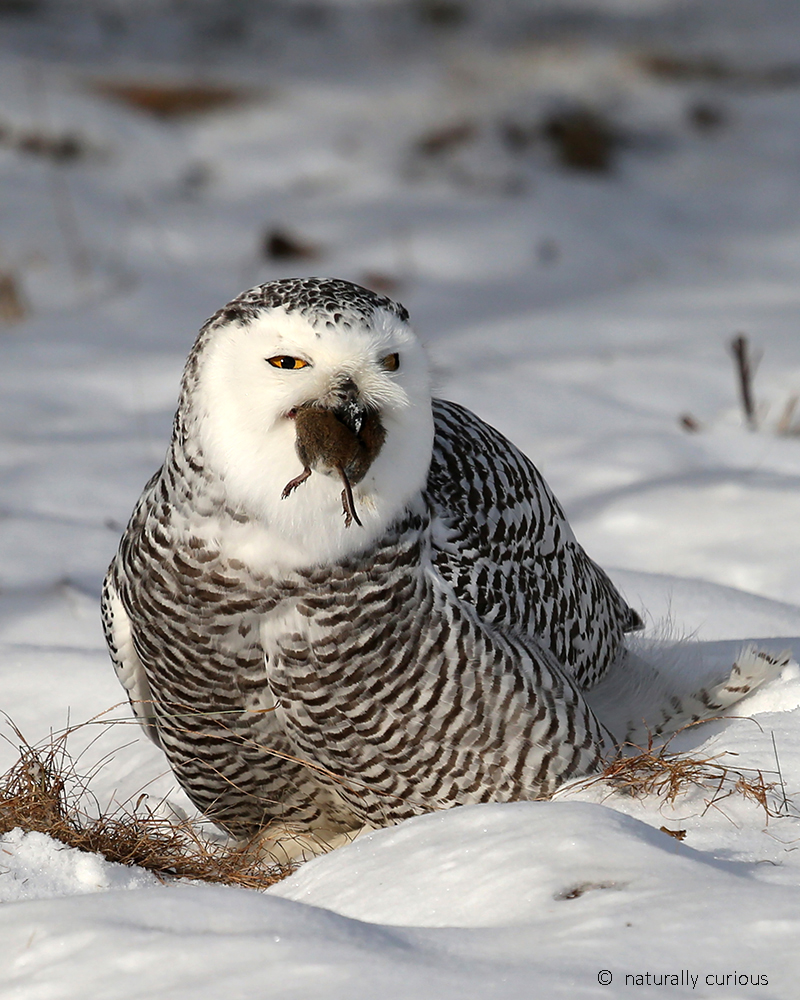 Every year in North America some Snowy Owls migrate southward during Arctic winters while some remain in the Arctic.  (In some winters — not this one — we see large numbers, or irruptions, of young owls in the Northeast which is thought to be a result of food and weather conditions further north.)  Individuals that spend the winter in New England usually can be found near large, open terrain that resembles their Arctic breeding grounds. Agricultural fields, coastal dunes and airports provide them with an ample diet of small mammals and birds.  Overwintering Snowy Owls begin to head northward in March and April. Occasionally a few owls linger on wintering grounds well into spring and summer (records of Snowy Owls exist in May in Massachusetts and June in New Hampshire).

Much has been learned about the migratory flights of Snowy Owls due to satellite tracking. According to Birds of North America, in February 2012, a transmitter attached to a female at Logan Airport in Boston, MA tracked an owl to Nunavut, Canada. The owl migrated north along Hudson Bay’s eastern shore during spring migration and returned south along Hudson Bay’s western shore during the autumn migration. It eventually returned to Logan Airport the following November, having completed a 7,000 mile round trip.

To start with the basics, both the excretory anatomy and the consistency of bird droppings are different from those of most mammals. Birds have one opening, a cloaca, which serves as their intestinal, reproductive and urinary tract. Everything from mating and laying eggs to voiding waste takes place via the cloaca.

Instead of releasing waste as urea dissolved in urine, as we do, birds excrete it in the form of uric acid, which is the white liquid we associate with bird droppings. Why is it white instead of brown? This is due to the biochemical reactions that take place in processing the waste so it can be safely excreted with minimal water loss.

If you look carefully at a bird’s droppings, you’ll usually find a small dark solid blob amongst all the white uric acid. Both acid and solid waste are evacuated from the same opening at the same time. Because they come from two different bodily systems, they don’t have much time to blend.

Most people are not great fans of bird droppings due to the damage (and mess) they can cause. However, some ingenious soul took advantage of this property and concocted a skin exfoliator for sale that consists of nightingale droppings, water and rice bran.

(This post is dedicated to my sister who didn’t quite believe I would actually write a post about this subject much less use this Snowy Owl photograph.)

The Feathered Feet of Northern Owls

Most owls have feathered legs, but the feet and toes of some owls, especially those living in colder, higher latitudes, are also densely feathered. The feathers keep the feet of these birds warm, allowing them to hunt where snow is on the ground and temperatures are very low. Great Gray Owls (pictured), Snowy Owls and Northern Hawk Owls are all examples of this phenomenon. Owls living in warmer climes, such as Barn Owls, have sparsely feathered feet and toes, and tropical owls have nearly featherless feet. This variation can also be found within a given species that has a range that extends over many degrees of latitude, such as the Barred Owl.

With the arrival of this winter’s first Snowy Owls in New England comes a renewed interest in the winter ecology of these birds of prey. An organization called Project Snowstorm (www.projectsnowstorm.org ) gathers detailed information every 30 seconds on the movement of Snowy Owls that they have outfitted with a backpack harness containing a solar transmitter. These transmitters use the cellular phone network, not a satellite, and when they are out of range of a cell tower, they store information which is transmitted when the bird is back within cell coverage territory – even if it’s years later.

The information that has been gleaned from this modern technology is stunning, and has allowed us to know far more about the behavior of Snowy Owls in winter. Some Snowy Owls stay within a quarter mile of where they are banded; others cover hundreds of miles within a few weeks. Some Snowy Owls spend much of the winter out on the frozen Great Lakes, where they prey on waterfowl they find in the cracks in the ice that open and close repeatedly.   Not only has it been confirmed that Snowy Owls feed heavily on birds in the winter (especially ducks, geese, grebes and gulls), but their use of channel markers and buoys as hunting perches while they seek prey over the open ocean at night has been documented.

The record number of Snowy Owls that spent the winter in New England are turning up in all sorts of new locations now that they are on their way back to their breeding grounds on the open tundra and stopping to refuel along the way. Although many were young birds, and won’t breed this year, the adult owls will when they reach the Arctic in a few weeks. First, the males perform aerial and ground displays. After mating, the female selects a nest site. In addition to having a sufficient food supply, the site must be snow-free, not subject to flooding, and command a view of its surroundings. The latter is achieved by making their nest on a hummock, or slightly raised surface of bare ground. The female scrapes a shallow depression in the earth with her claws, twirling around to make a form-fitted hollow. No insulating material is added to this depression – no vegetation, no feather lining. Eggs and nestlings are totally dependent upon the mother’s warmth, transmitted via the large, featherless, pink patch of skin on her belly known as an “incubation patch.” The female alone incubates the eggs and broods the young chicks while the male provides food for his entire family.