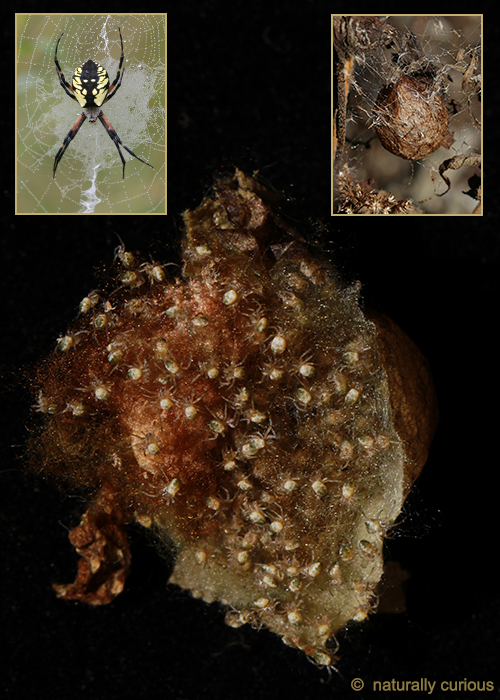 Some species of spiders (including wolf and jumping spiders) overwinter as young adults and mate/lay eggs in the spring. Many spiders, however, mate in the fall, after which they lay eggs and die. Their white or tan egg sacs are a familiar sight at this time of year. One might assume that these species overwinter as eggs inside their silken sacs, but this is rarely the case as spider eggs can’t survive being frozen. Spider eggs laid in the fall hatch shortly thereafter and the young spiders spend the winter inside their egg sac. 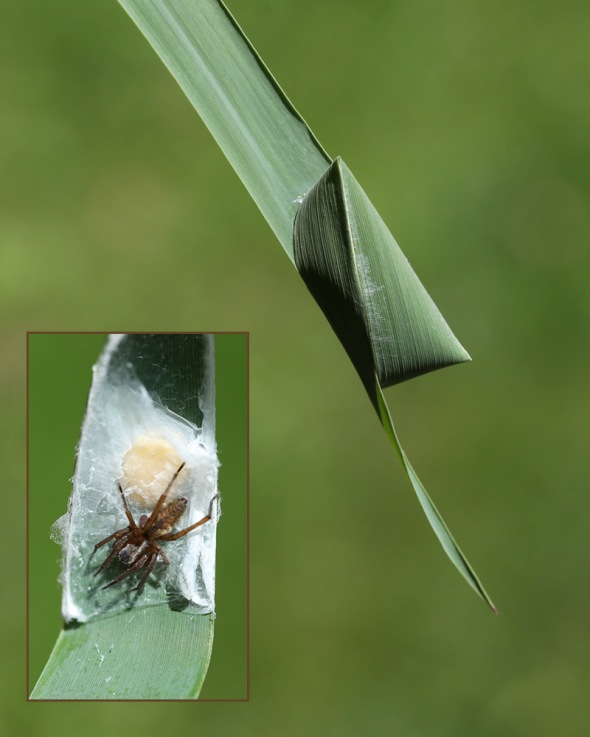 It is not unusual to come across a rolled-up leaf – the larvae of many moths create shelters in this fashion, using silk as their thread. Less common, and more intricate, are the leaf “tents” of sac spiders. With great attention paid to the most minute details, a female sac spider bends a leaf (often a monocot, with parallel veins, as in photo) in two places and seals the edges (that come together perfectly) with silk. She then spins a silk lining for this tent, inside of which she lays her eggs. There she spends the rest of her life, guarding the eggs. She will die before the eggs hatch and her body will serve as her offspring’s first meal. (Thanks to Ginny Barlow for photo op.)

Some Spiderlings Hatch in the Fall 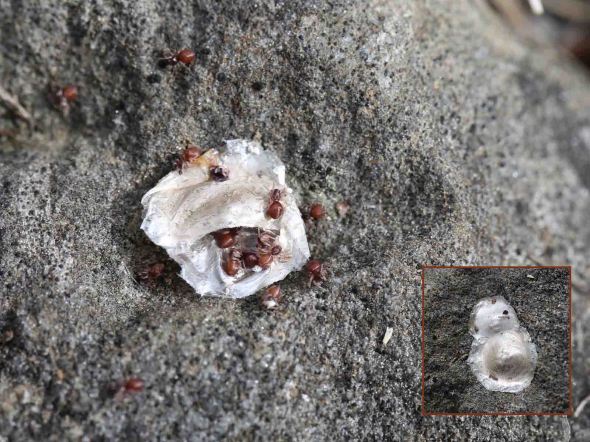 Have you recently noticed a roundish, flat, papery, 1/4-inch diameter, metallic-looking structure adhering to the top of a rock? If it has tiny bumps in the center, chances are good that it’s a spider egg sac, most likely that of an antmimic spider (spiders resembling ants that often prey on ants), specifically one in the genus Castianeira. One would assume that the contents of the sac that were causing the bumps were eggs that were going to overwinter and hatch once warm weather arrives. This is true for a majority of spider egg sacs, but some, including those of Black-and-Yellow Argiopes and antmimic spiders, hold spiderlings that have already hatched and will remain in the sac throughout the winter. As long as the temperature stays cold, the spiderlings will be safe and secure until spring. If we have periods of cold interspersed with periods of warmer temperatures, or an exceptionally warm winter, the spiderlings will become active when the thermometer rises, and, not having any insects to eat, will be forced to devour each other.