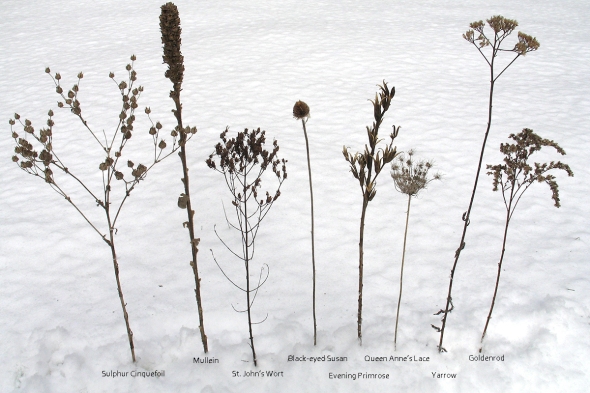 Humans have a long history of feeding birds. As early as 1500 BC Hindus provided birds (as well as dogs, insects, “wandering outcasts” and “beings of invisible worlds”) with rice cakes.  In 1825 one of the first bird feeders was constructed out of a modified cattle trough.  Bird feeding grew in popularity in the 1900’s and by 2019 roughly 60 million people in the U.S. were feeding birds, spending more than $4 billion annually on bird food. Bird feeding has become such a common practice that many people may wonder how seed-eating birds survived long, cold winters before humans fed them.

In fact, birds do very well without a helping hand from humans. A large number of winter bird species in the Northeast, especially sparrows and finches, are seedeaters (granivorous) and there are multiple wild sources of food for these birds, many found along roadsides and in fields.  These plants, called weeds by some, are known for the copious amounts of seeds they produce.  Ragweed, Pigweed, Bindweed, Thistle and Smartweed are some of the plants that are popular with seed-eating birds.  Some of the more familiar flowering plants such as Sulphur (or Rough-fruited) Cinquefoil, Mullein, St. John’s Wort, Black-eyed Susan, Evening Primrose, Queen Anne’s Lace, Yarrow and Goldenrod also feed a host of birds with their bounteous seed crops.