The larvae of sphinx moths, commonly called hawk or hummingbird moths, are easily recognized by the horn, eye spot or hardened button that is near the tip of their abdomen.  Most readers are probably familiar with the larval stage of tobacco and tomato hornworms (Carolina Sphinx Moth and Five-spotted Hawk Moth, respectively) which are found on tomato plants. A less observed sphinx moth, Abbott’s Sphinx Moth (Sphecodina abbottii), can be found on grape and Virginia creeper vines.  As a larva it molts several times and assumes three different appearances by the time it pupates.

Abbott Sphinx Moth larvae start out green, with a horn near the tip of their abdomen, like most other sphinx moths. However, when they are about half-grown, they turn blue-green and the horn develops into an orange knob (see inset).  In the last stages before they pupate, the larvae molt and the knob turns into an “eye,” complete with a black pupil and encircling iris.  The finishing touch is a white reflection spot that makes the eye appear moist and shiny.  At this point, the larvae may be either brown with a “wood-grain” pattern (resembling grape vines, a host plant) or brown with ten pale green saddles along the back (thought to resemble grapes).  Pictured are the second and third stages of a brown “wood-grain” Abbot’s Sphinx Moth larva.

Pandorus Sphinx Larvae About To Pupate 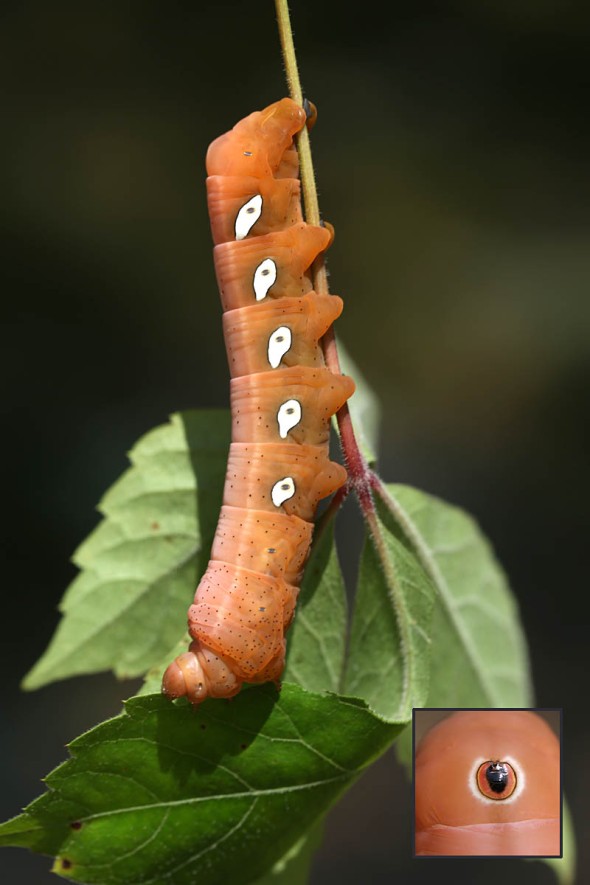 The family Sphingidae consists of sphinx (also called hawk) moths. In their larval stage, these moths are often referred to as hornworms, because of the horn, eyespot or hardened button they all possess at the far end of their bodies. (Many gardeners are familiar with the Tobacco Hornworm (Carolina Sphinx Moth), a voracious consumer of tomato plants.)

Before overwintering as pupae, hornworm larvae feed continuously. The pictured Pandorus Sphinx (Eumorpha pandorus) feeds on both grape and Virginia creeper foliage. This particular hornworm comes in four colors – green, orange, pink or cinnamon and can grow to a length of 3 ½ inches before pupating. Each of the white spots surrounds a spiracle, or tiny hole through which air enters the hornworm’s body. A horn is present up until the last instar, or stage, of the larva’s life, at which point it is replaced by a button (see insert) that resembles an eye. The larva will soon burrow into the soil, spend the winter as a pupa, and emerge as an adult moth in the spring.(Thanks to Sadie Richards Brown for finding and caretaking this caterpillar until I could photograph it.)

Tobacco Hornworms, Manduca sexta (often found feeding on tomato plants and confused with Tomato Hornworms, Manduca quinquemaculata) are often the target of a species of a Braconid wasp (Cotesia congregata) that parasitizes beetle, moth, fly and sawfly larvae. The adult wasp lays her eggs inside the hornworm with her long ovipositor. The eggs hatch and the wasp larvae feed on the caterpillar. Eventually the wasp larvae emerge and spin silk pupa cases (cocoons) on the skin of the dying hornworm caterpillar, inside of which they transform into winged adults within four to eight days. Braconid wasps are extremely good at locating hornworms, even when there are very few to find. Because they parasitize hornworm, cabbage worm, aphid and gypsy moth larvae, Braconid wasps are considered important biological control agents. If you want to discourage Tobacco Hornworms in your tomato patch, allow the wasps to complete their metamorphosis – this accomplishes both the demise of the hornworm, as well as an increased population of Braconid wasps. (Thanks to Emily and Joe Silver for photo op.)