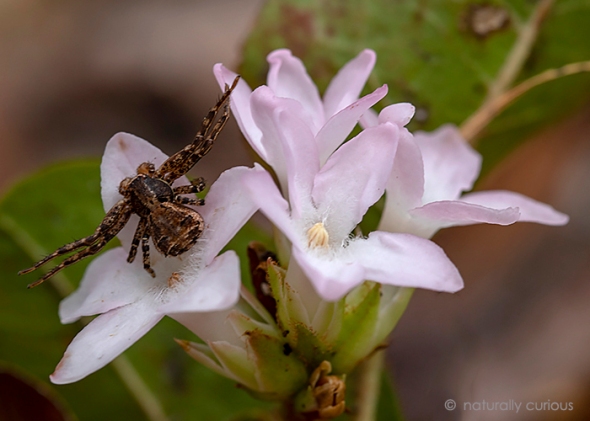 Trailing Arbutus (Epigaea repens) is one of our earliest spring wildflowers. Sometime in April or May the creeping, leathery, evergreen leaves of this plant suddenly come alive with white or pink tubular flowers. While they are delightful to look at, their fragrance is what truly sets them apart from many other plants that flower this time of year.

Because there aren’t that many insects about this early, nor flowering plants, insect predators can have a challenging time finding prey. The pictured crab spider chose its perch wisely: bumble bees are the main pollinators of Trailing Arbutus, and queens are out scouting for food as they begin to establish their colonies.

There is a reason why we often see bumblebees before we see honey bees in the early spring. It’s a matter of 5 degrees Fahrenheit. Bumblebees will fly when the air temperature is as low as 50°F. and sometimes lower. Honey bees cannot fly if it’s colder than 55°F.

Even though they can fly at 50°F., bumblebees cannot take off unless their flight muscles are above 86°F. and they must keep the temperature of their thorax between 86°F. and 104°F. In order to accomplish this, bumblebees uncouple their wing muscles so that the wings themselves do not move, and then use the muscles to shiver and raise their thorax temperature. (Photo: Tri-colored Bumblebee & Trailing Arbutus)

One of the first wildflowers to burst upon the scene in April is Trailing Arbutus, Epigaea repens – a true harbinger of spring. This plant is also referred to as Mayflower and Plymouth Mayflower, as it was a welcome sight to the Pilgrims after their first winter.

It is a first for me to find this plant in flower at this time of year; I have never even heard of this occurring. The flowers are often well hidden beneath leathery, evergreen leaves, so can survive the cold temperatures in April and May, but they face much greater challenges flowering in late October. Most of their main pollinators (bumblebees) die with the first hard frost, which most of northern New England has experienced. And even if, by some stroke of luck, a lingering bumblebee did land on and pollinate a blossom, it’s very doubtful that even with our warming climate, there would be time for fruit to form and mature.  Certainly the energy used to produce fall flowers is an expense the plant can ill afford in its efforts to reproduce.   (Photo taken 10-28-17 in Hartland, VT)

The fragrant flowers of Trailing Arbutus (Epigaea repens) are starting to open in central Vermont.  While this plant, also known as Mayflower, is an early-flowering plant, it appears to be even more so this year.  Fortunately the earliest flowers survived the recent cold spell and will undoubtedly provide food for the several species of queen bumble bees that are soon to emerge from hibernation.

I wandered lonely where the pine-trees made

Against the bitter East their barricade,

And, guided by its sweet

Perfume, I found, within a narrow dell,

Amid dry leaves and mosses at my feet.

From under dead boughs, for whose loss the pines

While yet the bluebird smoothed in leafless trees

His feathers ruffled by the chill sea-breeze,

And snow-drifts lingered under April skies.

As, pausing, o’er the lonely flower I bent,

I thought of lives thus lowly, clogged and pent,

Which yet find room,

Through care and cumber, coldness and decay,

To lend a sweetness to the ungenial day

And make the sad earth happier for their bloom. 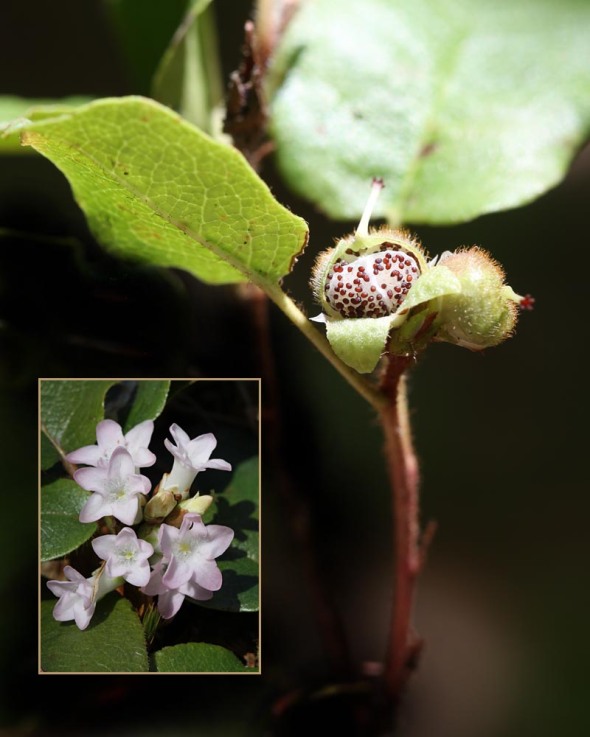 The fruit of Trailing Arbutus (Epigaea repens), also known as “Mayflower,” is maturing. While this plant’s flower is familiar, its fruit may not be. Although it develops from the flower, and therefore is in the same location (under cover of Trailing Arbutus’s leathery leaves next to the ground), it is not as showy or as noticeable. In addition, the aromatic pink and white flowers that blossom in early spring infrequently set fruit. Out of a stand of well over 100 flowering Trailing Arbutus plants, only two could be found that bore fleshy white fruit. 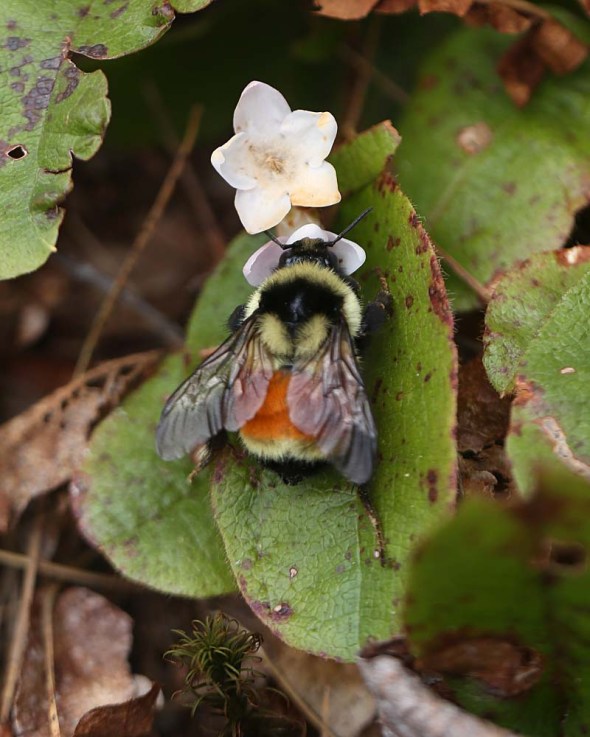 Most bumblebees, unlike honeybees, die in the fall. Only the young, fertilized bumblebee queens overwinter. When they emerge early in the spring, each must start a new colony, with no help from worker bees. The queen builds a ball of moss, hair or grass, often in an abandoned rodent nest or small cavity. Within this ball the queen builds a wax honey pot, and provisions it with nectar from early-blooming flowers. Next, she collects pollen and forms it into a mound on the floor of her nest. She then lays eggs in the pile of pollen, and coats it with wax secreted from her body.

The queen bumblebee keeps her eggs warm by sitting on the pollen mound, and by shivering her muscles, raising her body temperature to between 98° F. and 102° F. For nourishment, she consumes honey from her wax pot, which is positioned within her reach. In four days, the eggs, all of which will become female workers, hatch. The bumblebee queen continues her maternal care, foraging for pollen and nectar to feed to her larvae until they pupate. After this first brood emerges as adult bumblebees the queen concentrates her efforts on laying eggs. Unfertilized female worker bees raise the larvae and the colony swells in number. At the end of summer, new queens (females) and males are produced in order to allow the colony to reproduce. After the new queens mate and become fertilized, the males all die, along with the female worker bees. The queen then seeks shelter for the winter. (Photo: Tri-colored Bumblebee queen collecting Trailing Arbutus nectar or pollen)

Trailing Arbutus (Epigaea repens) is said to have heralded spring to the winter-weary Pilgrims in 1621 and thus is known as “Mayflower” by many. (It is also the Massachusetts state flower.) Creeping along the ground where the soil is typically quite acidic are Trailing Arbutus’s hairy, woody stems bearing evergreen, aromatic leaves that are present year round. Only in the early spring are we treated to its fragrant pink flowers, often nestled under these leathery leaves. Abundant nectar is found by overwintering bumblebee queens that are attracted to Trailing Arbutus’s indescribably delicate and sweet-smelling scent.