In winter it is common to use the pattern by which branches and buds are arranged on a deciduous tree as a first, quick clue to the tree’s identity.  There are two large groups of trees, those with alternate and opposite patterns, and a third less common pattern, whorled.  Trees with alternate arrangement have only a single leaf/bud/branch attached at one location (node) on a branch.  Those with opposite arrangement have two leaves/buds/branches attached at a node, opposite one another on either side of the branch.  When more than two leaves/buds/branches arise from a node (rare) this is called a whorled arrangement.

At this time of year, when deciduous trees are bare, you can see the arrangement of buds, branches and leaf scars (where leaves have fallen off) clearly.  Relatively few trees have opposite branching – Maples, Ashes, Dogwoods, and Horse Chestnuts – while a majority have alternate branching.  More characteristics are needed to narrow a tree down to species, but noting its arrangement is an easy and quick way to eliminate certain species.

Striped Maple (Acer pensylvanicum), named after the vertical white streaks on its bark,  is often associated with Moose and White-tailed Deer, both of which feed on its bark. In some places it goes by the name “Moosewood” for this very reason. The shape of its leaves give it another common name, “Goosefoot Maple.” In the spring when Striped Maples are nearly in full leaf, bright yellow bell-shaped flowers appear on long, pendulous strings, or racemes. (The flower stalks of the similar Mountain Maple also materialize after the leaves have matured, but these flower clusters are upright, held above the surrounding leaves.)

Striped Maples have the unusual ability to change sexes repeatedly over their lifetime (as does Jack-in-the-Pulpit), a phenomenon called gender diphasy. Among five study populations located in New Jersey, approximately one in four trees exhibited a change in the sex of its flowers between flowering seasons. The flowers of most Striped Maples are predominantly male. If changes occur in the canopy and new conditions seem favorable, a predominantly male tree can become predominantly female (and vice versa, if conditions deteriorate). Size, injury, and carbohydrate reserves are thought to impact the frequency and direction of gender change. Another unusual trait of Striped Maples is that the final sex of a flower is determined within one month of flowering, in contrast to most woody perennials which set buds the previous year.

White ash, Fraxinus americana, is relatively easy to identify in winter, between its stout, opposite branches and buds and the corky ridges that form diamond shapes on its bark. There are several species of ashes, however, and one feature that distinguishes White Ash is the shape of its leaf scars (located beneath leaf buds) on well-developed branches. Each leaf scar (left by a leaf that fell off the tree) is round at the bottom and notched at the top, resembling the letter “C” on its side. (No other ash has c-shaped leaf scars.) It is often concave along the upper edge and the lateral buds are located within the curved portion of the leaf scar. 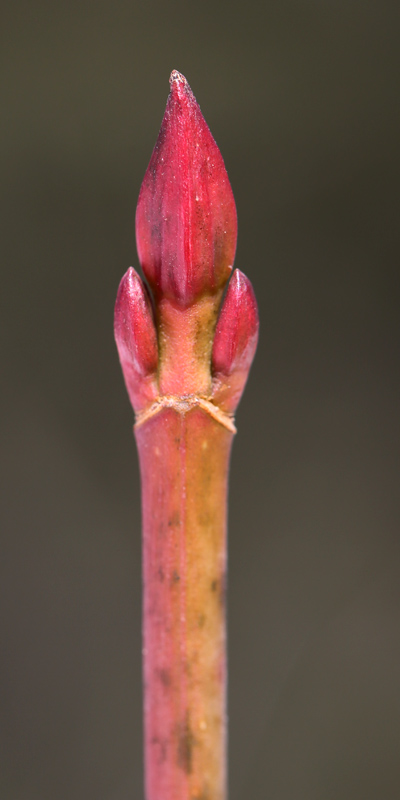 Striped Maple (Acer pensylvanicum), also known as Moosewood and Moose Maple, can easily be identified summer or winter by its greenish bark bearing vertical white stripes (hence, its common name). Because the bark is so distinctive, one needn’t rely on Striped Maple’s buds for identification purposes, but they are well worth investigating, nonetheless. Their graceful shape, smooth surface (few bud scales) and pinkish-red coloration distinguish them from all others. These buds and young branches that bear them are devoured by rabbits and hares, are frequently eaten by porcupines and beavers, and provide browse for deer and moose.

Black walnut (Juglans nigra) is a relatively easy tree to identify, as it has so many distinctive qualities. In the summer there are round, tennis-ball-sized nuts, which have a delightful smell.  The bark of black walnut is dark and deeply furrowed.  Best of all are the twigs and buds.  If you cut a twig at an angle, you will see the central portion, or pith, is chambered.  It is also brown.  The only other tree that is chambered (not solid) like this is its relative, butternut (Juglans  cinerea), and butternut’s pith is buff colored.  The buds of black walnut are greyish and fuzzy – lacking bud scales.  By far the most amusing thing about black walnut (and butternut) is its leaf scars – the scar left when a leaf falls off.  The vessels that transport food and water, called vascular bundles, are darker than the rest of the scar, and are shaped in such a way that the leaf scar resembles nothing more than the smiling face of a monkey!  (Butternut leaf scars also look like monkeys, but they have a “furrowed brow” of fuzz on the top edge of the leaf scar.)

Yellow birch (Betula alleghaniensis) buds are oval and pointed, and there are two shades of brown on each of their 3 – 5 bud scales.  The buds and twigs of yellow birch taste like wintergreen.  In the early morning and late afternoon, look for ruffed grouse filling their crops (“budding”) in yellow birch trees, as these buds are one of their favorite foods.  The thin bark of a mature yellow birch is a very distinctive yellow-bronze color (the bark of saplings is a shiny red-brown color), and curls when it separates from the trunk.

Maples have what is referred to as “opposite” branching – the buds, leaves and branches are positioned opposite one another. If you look at this photo of the terminal bud of a sugar maple (Acer saccharum) you’ll see that the two lateral buds (on either side of the terminal bud) are directly across from each other.  This is relatively rare in the woody plant world — you’ve narrowed down the identity of a tree significantly if you determine that it has opposite branching (ashes and dogwoods, among others, share this characteristic). The buds of sugar maple are pointed.  The appearance of its bark depends on the age of the tree you’re looking at.  Saplings and younger branches are quite smooth (right branch in photo), whereas the bark of an old sugar maple is furrowed with vertical ridges curled outward along one side (left side of photo).

While identifying an oak species by the shape of its leaf is fairly easy, there are other characteristics in winter, when leaves aren’t available (except under the snow), that serve as clues to an oak’s identity.  A mature northern red oak can be readily recognized by its bark — its ridges appear to have shiny stripes down the center.  The buds of northern red oak are also distinctive.  Like most oaks, red oak’s terminal (located at tip of twigs) buds occur in clusters.  Northern red oak’s terminal buds are conical, and are a reddish-brown color.

Bark, silhouettes and buds are the three keys to identifying trees in winter. My preference is buds, as they are so distinctly different from one species to the next. American basswood, or linden (Tilia americana), is a favorite. Its plump, oval, asymmetrical red buds, bearing only one or two bud scales are unmistakable.