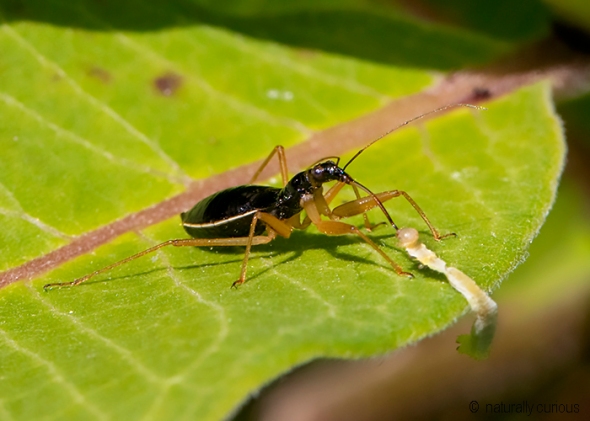 Although the term “bug” is commonly used to refer to just about any insect, there is a specific order of insects (Hemiptera) that are considered “true bugs” and allies. All insects in this order possess a syringe-like beak that they use to suck the liquefied contents out of plants or animals. Their lower lip forms a sheath that contains four blades. One pair of blades (mandibles) is for cutting and the other pair (maxillae) is for spitting and sucking. The maxillae combine to make a tube with two channels, one for sucking food up and the other for spitting saliva (containing enzymes that dissolve tissue) back into the food.

Some of the insect-eating true bugs may be familiar to you – assassin bugs, ambush bugs and damsel bugs (named for their diminutive size) are among them. Nabicula subcoleoptrata (pictured) is a common black, ant-like damsel bug known for its aggressive predation. Look for it in meadows, where it frequently preys on an introduced bug, the Meadow Plant Bug (Leptopterna dolabrata). In this photograph, it has successfully preyed upon and consumed a small larva, identity unknown.

Monarch larvae aren’t the only insects equipped to feed on the toxic cardiac glycoside-filled leaves of milkweed. Milkweed Tussock Moth larvae also dine on them, avoiding veins due to the latex-like, sticky white sap that could glue them in place. When they first hatch, Milkweed Tussock Moth larvae tend to stick together in “herds,” all feeding on the underside of the same leaf. This behavior provides a gold mine for predators such as predatory stink bugs (pictured) that discover them. Unlike their (plant) sap-sucking stink bug relatives, predatory stink bugs feed on more than 100 species of insect pests, often attacking insects much larger than themselves, drinking their body fluids with their needle-like beak. (Photo taken and kindly donated by Chris Doyle) 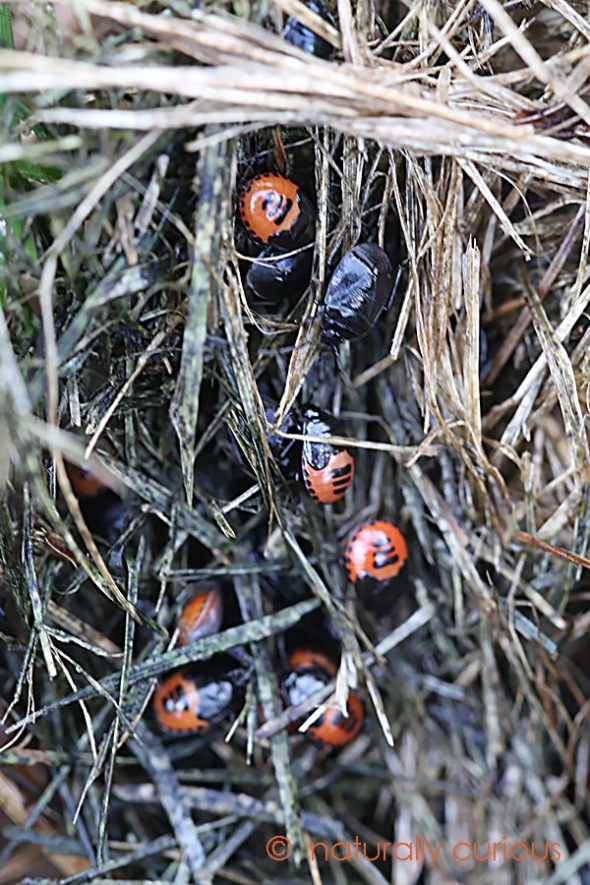 White-margined Burrower Bugs (Sehirus cinctus) are true bugs, members of the order Hemiptera. The red and black bugs in this photograph are immature nymphs and have molted once. Their coloring serves as a warning to would-be predators that they are at the very least distasteful, and possibly poisonous. Adult White-margined Burrower Bugs are roughly ¼” long, and black with a white margin (not visible in photo) along the edges of their forewings.

These bugs feed on the seeds of plants in the mint and nettle families. Being true bugs, they feed not by chewing but by piercing seeds with a sharp beak, injecting digestive enzymes, and then sucking in the partially digested food.

White-margined Burrower Bugs are fairly unusual for non-social insects in that the mothers provide care and provisions for their young, much like social insects such as ants, paper wasps and honeybees. The adults dig shallow burrows into which they place a supply of seeds and lay between 120 and 150 eggs next to the seeds. They guard their eggs and brood and bring more seeds as needed for 1-3 days after the eggs hatch. At this point, the young bugs can forage for themselves.

Adults dig down into the leaf litter in late fall, where they overwinter and emerge next spring ready to mate. If you see a large cluster of White-margined Burrowers Beetles, do not be alarmed, as they do not bite nor are they interested in eating anything but species of mint and nettle. 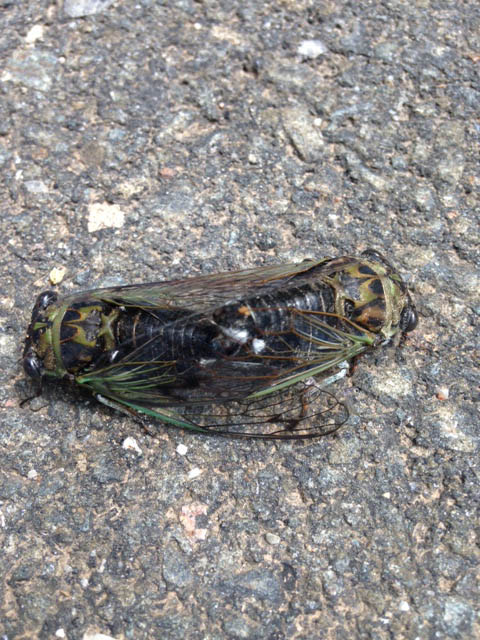 Adult annual cicadas, including the pictured Dog-day Cicadas, have emerged from their subterranean dwellings. High up in trees most males are vibrating their abdominal tymbals (drum-like organs) in order to woo female cicadas with their “song.” Thanks to an abdomen that is relatively hollow, the sound is intensified, and very audible to human ears as a high-pitched whining drone, somewhat resembling a buzz saw. We associate it with the hot, humid “dog days” of July and August.

Annual cicadas emerge from the ground (where they have been feeding off of the sap of trees through the trees’ roots for two to four years) every year as nymphs. They climb a tree, split and emerge from their exoskeleton, or outer skin, and pump their wings full of fluid. After their exoskeleton dries, the adult cicadas (also called imagoes) head for the canopy, and males commence “singing” to attract a mate. Within two weeks mating takes place, eggs are laid in slits of live branches and the adults die. After hatching, the nymphs will drop to the ground and burrow into it with their shovel-like front legs. (Thanks to Wallie Hammer for taking and providing today’s photograph. Mating usually takes place in the canopy, and therefore rarely seen.)

In case you missed it last night, here it is!

Roughly 30 years ago Western Conifer Seed Bugs (Leptoglossus occidentalis) started moving east. They are now well established coast to coast. Here in the East they seek shelter during the winter, often choosing to share our domiciles with us. Fear not – though they look fairly menacing, they will do you no harm. Western Conifer Seed Bugs do not bite or sting, and in their semi-dormant condition they do not feed or breed. If you choose not to co-habit with these bugs, be forewarned. When disturbed, they can emit a noxious smell.

In the spring they will vacate your house and feed on the sap of the young cones and flowers of conifers, including Eastern White Pine, Red Pine, Scotch Pine, White Spruce and Eastern Hemlock. Mating takes place, eggs are laid and the young nymphs feed on conifer seeds which they find by detecting the infrared radiation that the cones emit.
These bugs are also called “leaf-footed bugs,” and if you look at their hind legs you will see that a section, the tibia, is flattened. Some species display this specialized leg structure during courtship, and others may use it for defense purposes.

Occasionally you see a wild Blackberry bush with leaves that have stunted growth and are often curled up. This malformation is due to the Blackberry Psyllid (Trioza tripunctata), also known as the Jumping Plant Louse. Closely related to aphids and scale insects, psyllids are plant-feeding bugs which typically have one specific host on which they feed and lay their eggs. Blackberry Psyllids, small, cicada-like insects that hold their wings tent-like over their body, feed only on Blackberry and in so doing, cause this leaf distortion.

Blackberry Psyllids have one generation per year. The adults mate and lay eggs (39-202) on Blackberry bushes in early summer. The nymphs, small and wingless, also feed on the sap of Blackberries. They are often found inside the curled leaves during the summer months where they secrete several types of waxy structures as they feed. In the fall the nymphs mature and overwinter as adults in conifers (pines, spruces and cedars) prior to returning to Blackberry bushes in the spring. If Blackberries are one mile or more from conifers, no psyllid damage will be found; those growing within one-eighth of a mile from conifers are at the greatest risk of psyllid damage.