For the past three months, Snapping Turtle eggs have been buried roughly five to ten inches deep in sandy soil (depth depends on the size of the female laying them), absorbing  heat from the sun-warmed soil.  Come September, the relatively few Snapping Turtle eggs that have avoided predation are hatching.  The sex of the baby turtles correlates to the temperature of the clutch. Temperatures of 73-80 °F will produce males, slightly above and below will produce both sexes, and more extreme temperatures will produce females.  The miniature snappers crawl their way up through the earth and head for the nearest pond, probably the most perilous journey of their lives.

This Wood Turtle is climbing up a sandy hill in order to find a high elevation site in which to lay her eggs, one where the soil temperature is just right and where flooding is not likely to occur.

Twice a year, in the spring and fall, Wood Turtles engage in a mating ritual that involves both turtles “dancing” with each other prior to copulating in the water.  Once mating has occurred, the female seeks out a suitable habitat in which to lay her 3-20 eggs, usually near a stream.  Once the nest cavity has been dug, the eggs laid, and the cavity filled with dirt and/or leaves, the female departs, never to provide care for her young.  The eggs hatch and the hatchlings emerge from the nest sometime between August and October.  Unlike most turtles, the sex of the hatchlings is determined genetically and not by the temperature of the eggs.

The courtship of Painted Turtles begins shortly after they emerge from hibernation in April and May.  It is quite an elaborate process, with the male swimming in front of the female and rapidly vibrating his long toenails along her head.  Mating follows and a month or two later females look for terrestrial nesting sites, often late on a rainy afternoon.

Frequently the female will dig several “false” nests before depositing her half a dozen or so eggs in a nest. After carefully covering her eggs with soil and leaving the ground looking relatively undisturbed, she returns to her pond, providing no care for her offspring.

Painted Turtle eggs hatch in the fall.  In the Northeast some young Painted Turtles emerge above ground shortly after hatching, while others remain in the nest and don’t dig their way out until the following spring. (Turtles from the same nest can emerge at different times.) Those turtles emerging in the fall usually have an egg tooth and a fresh yolk sac scar; those that overwinter and emerge in the spring lack both of these. (Thanks to Jody Crosby for photo op.) 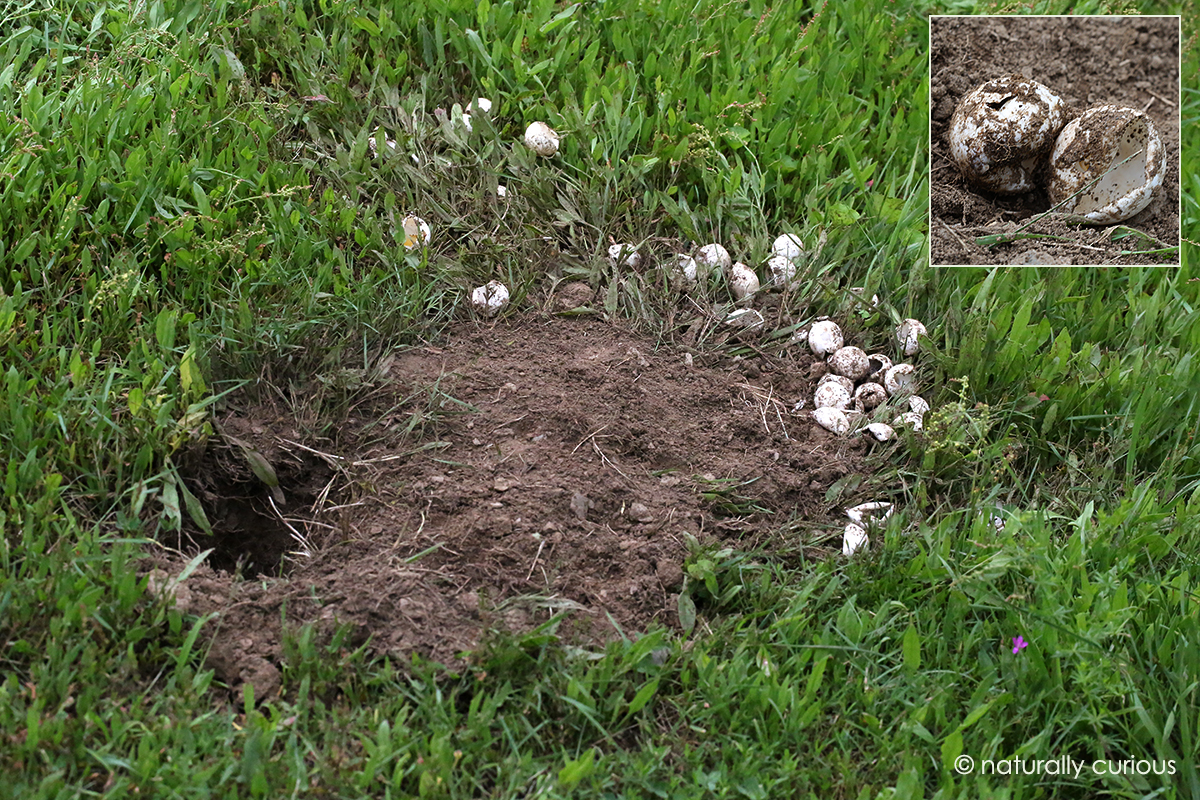 Female Snapping Turtles spend a lot of time and effort finding suitable sandy soil in which to dig their nest and lay their eggs. Some turtles have been found laying their eggs as far as a mile from the nearest water source. Once she has laid her eggs and covered them with soil, the female snapper returns to her pond, leaving her eggs to hatch on their own, and the hatchlings to fend for themselves.

It is estimated that as many as 80 to 90 percent of all turtle nests are destroyed by predators, weather conditions and accidental disturbances. Most of the damage is done by predators – skunks, raccoons, foxes, crows, among others. Most nests are discovered by smell, and most are raided at night. The fluid that coats the eggs, that is lost by the mother during egg laying or is lost through breaks in the eggs, produces a smell that is easily detected by predators. While a majority of nest raids happen within the first 48 hours of the eggs being laid, studies have shown that predation occurs over the entire incubation period (June – September). The pictured Snapping Turtle nest was dug up and the eggs consumed 10 days after they were laid.

If you are aware of a spot where a turtle dug a nest and laid eggs, you can try to protect the nest from predators by placing either a bottomless wire cage or an oven rack over the nest site, and putting a heavy rock on top. The tiny hatchlings will be able to escape through the openings but hopefully, if the rock is heavy enough, raccoons and skunks will become discouraged and give up trying to reach the nest.