Wild Clematis (Clematis virginiana), also known as Virgin’s Bower and Old Man’s Beard, is one of our native vines.  It is a member of the buttercup family and bears clusters of white to green flowers that mature into fluffy seedheads. Ellen Rathbone in the Adirondack Almanack delightfully refers to these seed clusters as “Truffula Trees” — if you’ve ever rad The Lorax by Dr. Seuss, you can appreciate how apt this comparison is.

Wild Clematis contains glycosides and is toxic, so shouldn’t be consumed, but it is a very dramatic sight to come across when the seeds are mature and have yet to be dispersed. 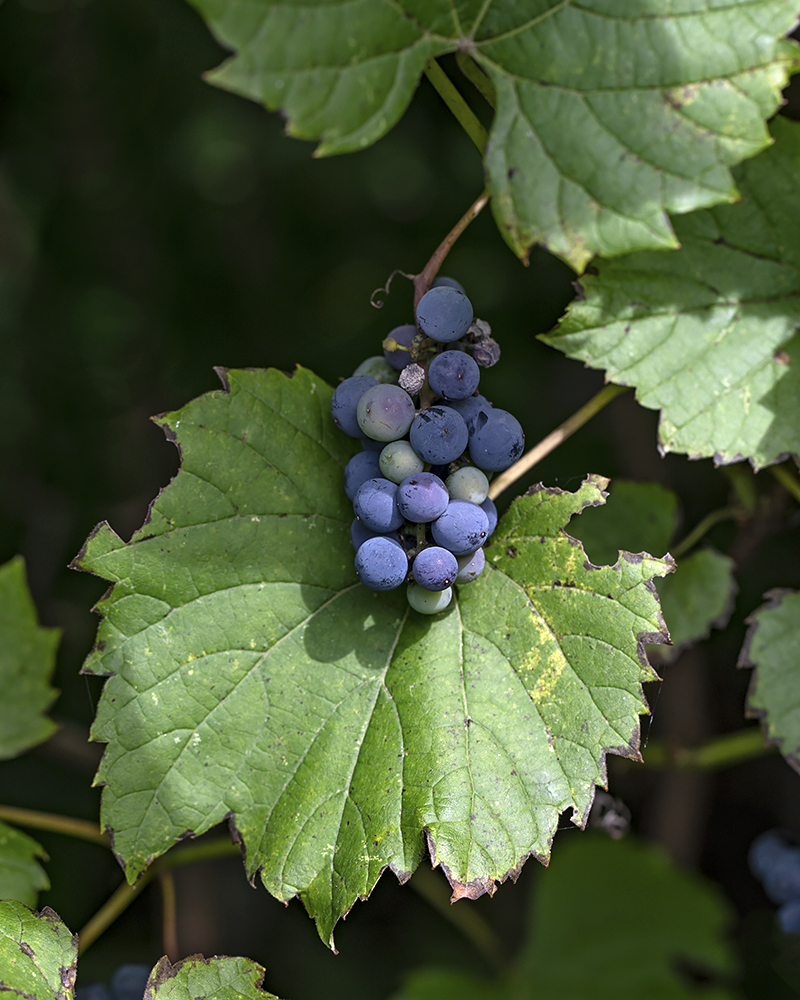 Have you ever noticed that some wild grape vines bear fruit, while others appear barren? There is a very good reason for this — it depends on whether you are looking at a male or a female grape vine.  The most common wild grapes in New England are Vitis labrusca (Fox Grape) or Vitis riparia (Riverbank Grape, or Frost Grape) – both of which have separate male and female plants (dioecious).  The female plants, if their flowers are fertilized, produce grapes, whereas the flowers of the male vines do not.  In contrast, most cultivated grape varieties are hermaphroditic — their flowers have both male and female reproductive structures, and can self-pollinate and produce fruit. 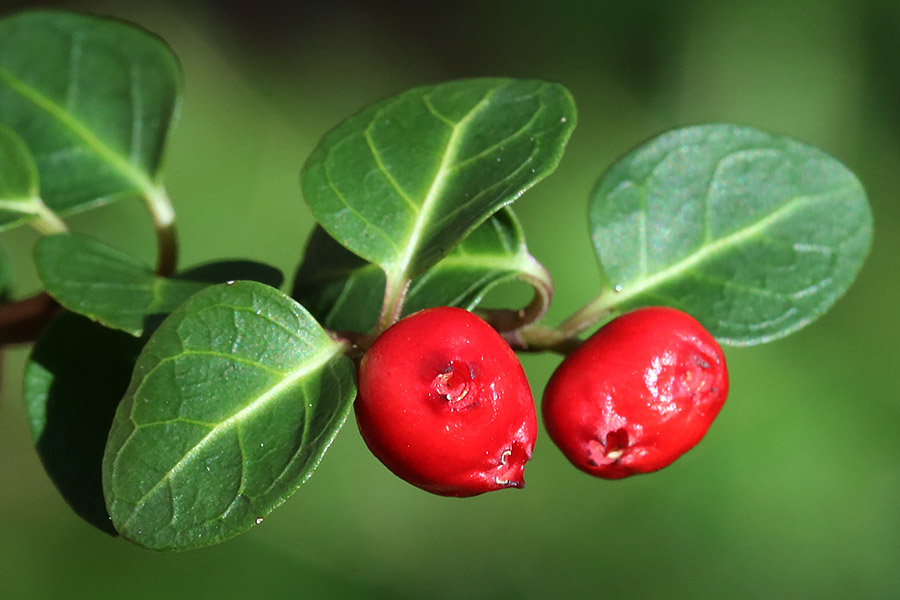 Partridgeberry (the fruit is eaten by partridges, or ruffed grouse, as well as wild turkey, mice, foxes, skunks and deer) is a woody vine found creeping along the forest floor, often in large colonies. At this time of year there are bright red berries interspersed among the paired evergreen leaves. If you look closely at a berry, you will see two indentations at its tip. These are the result of the flowers’ unusual structure and the fruit’s development.

In late spring a pair of white flowers appears which share a set of sepals. Each small, fragrant flower has four white hairy petals that join to form a tube. The unusual aspect of these flowers is that they both must be pollinated to obtain a single berry. Each berry is the result of the fusion of the ovaries of the pollinated pair of white flowers. This fusion is what accounts for the two indentations on the surface of each fruit.

There are a number of birds that have returned to New England from their southern wintering grounds and are working hard to find enough to sustain themselves until food is more plentiful. Eastern Bluebirds, Hermit Thrushes, Northern Mockingbirds, Eastern Phoebes and Yellow-bellied Sapsuckers adapt their diets to whatever is available at this time of year, which can mean going from eating insects to consuming fruit. Fruits that persist through the winter are few and far between, but one of the plants that provides the most sustenance to birds in early spring is Poison Ivy. The off-white, berry-like fruits are extremely popular with at least 60 species of birds, including the early returning migrants previously mentioned, as well as Gray Catbirds, Yellow-shafted Flickers, Wild Turkeys, and Downy, Hairy, Red-bellied and Pileated Woodpeckers. The popularity of Poison Ivy fruit with birds explains why this plant is common along fencerows and other areas where birds roost (and pass the seeds). (Caution – irritating urushiol, an oily resin found in the sap of Poison Ivy, is present in the leaves, stems, flowers, roots and fruit of this plant.)

Poison Ivy is in the Anacardiaceae family, which also includes cashews, mangos and sumacs. The sap of the stems, roots, fruit and leaves of many species in this family contains urushiol oil, which is what causes the allergic rash in 80% of humans that come in contact with these species. Poison Ivy is very sensitive to carbon dioxide, and even slightly elevated levels of CO2 have proven to increase its growth. In the past 50 or 60 years, during which time the amount of carbon dioxide in the atmosphere has increased by roughly 22%, Poison Ivy’s growth rate has doubled. The amount of urushiol oil has not only increased, but it is also more potent…leaves of three, let them be. 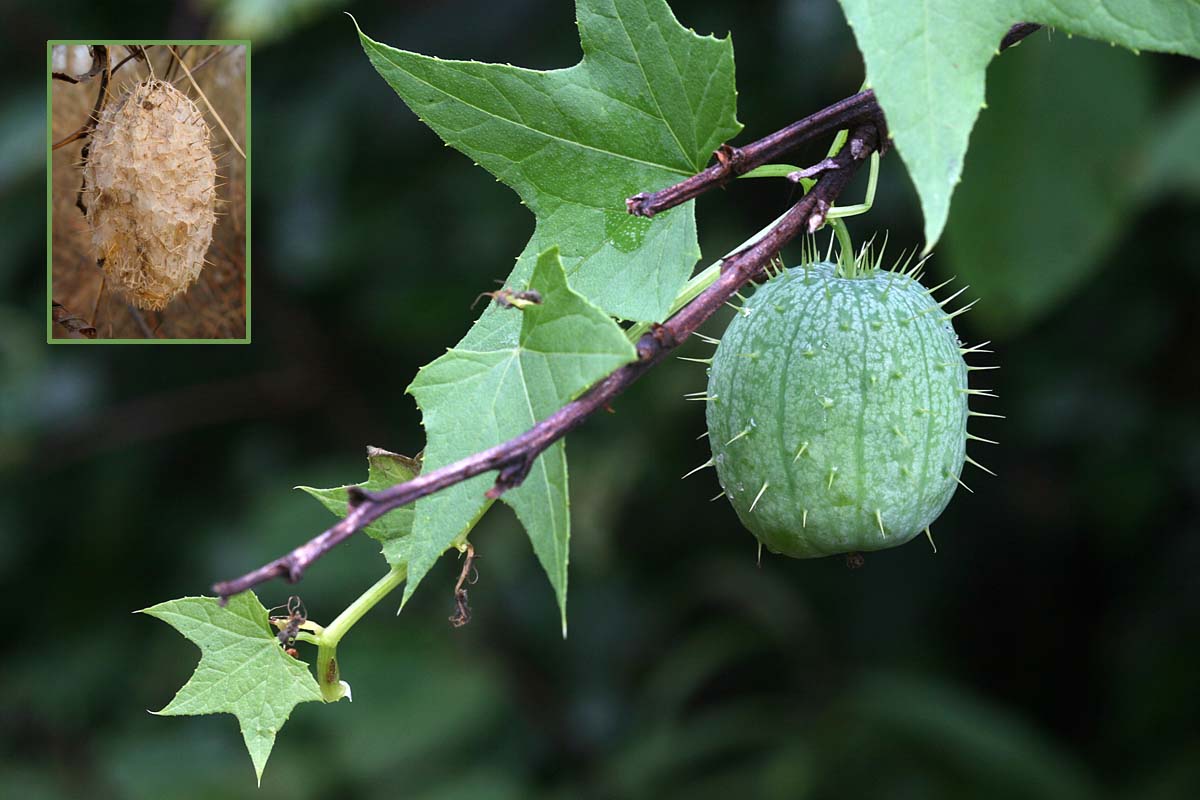 Looking more like a miniature spiny watermelon than a cucumber, the fruit of Wild Cucumber (Echinocystis lobata) grows on an annual vine that can reach a length of 15 to 25 feet. The genus name Echinocystis comes from the Greek echinos for “hedgehog” and cystis for “bladder”, appropriately describing the prickly fruit. The puffy, spherical-to-oblong, green fruits with long, soft spines grow up to two inches long. Despite its common name, Wild Cucumber fruits are not edible, and can cause burning reactions in some people. When ripe, the fruit turns brown and dries up, bursting open at the bottom, ejecting four large, flat, black seeds. 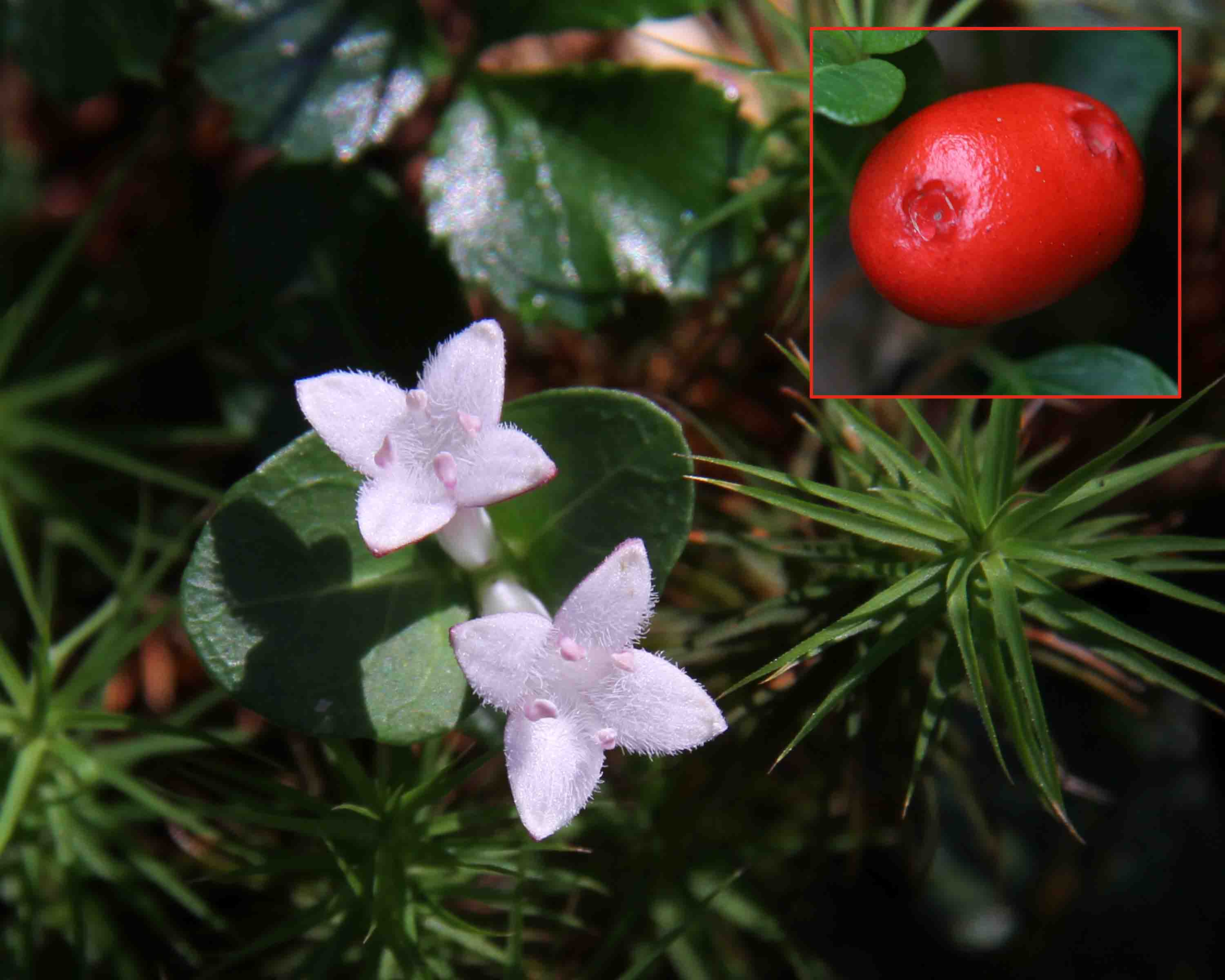 In many areas the forest floor is now carpeted with flowering Partridgeberry (Mitchella repens), the creeping, woody vine found in both deciduous and coniferous woods. The pairs of white flowers occur in two forms. In the first form (pictured) the pistil is short and the stamens are long; in the second form the pistil is long and the stamens are short. This structure prevents each flower from fertilizing itself. Both flowers must be pollinated to obtain a single scarlet berry. Each berry is the result of the fusion of each ovary of the pollinated pair of white flowers. As such, each berry has two bright red spots on its surface.

My apologies. I inadvertently mis-identified today’s flowering plant, Virgin’s Bower (Clematis virginiana). There are several members of the Buttercup family, Ranunculaceae, that are very similar, however, Clematis virginiana is pictured! It is a native perennial vine that is also known as Devil’s Darning Needle, Love Vine and Woodbine, among other common names. The styles, or female structures of its small, greenish-white flowers, develop into long feathery appendages on each of its seeds. Together the clusters of white “hairy” fruits give this plant its common name. The delicate beauty of its seed heads cannot be denied. 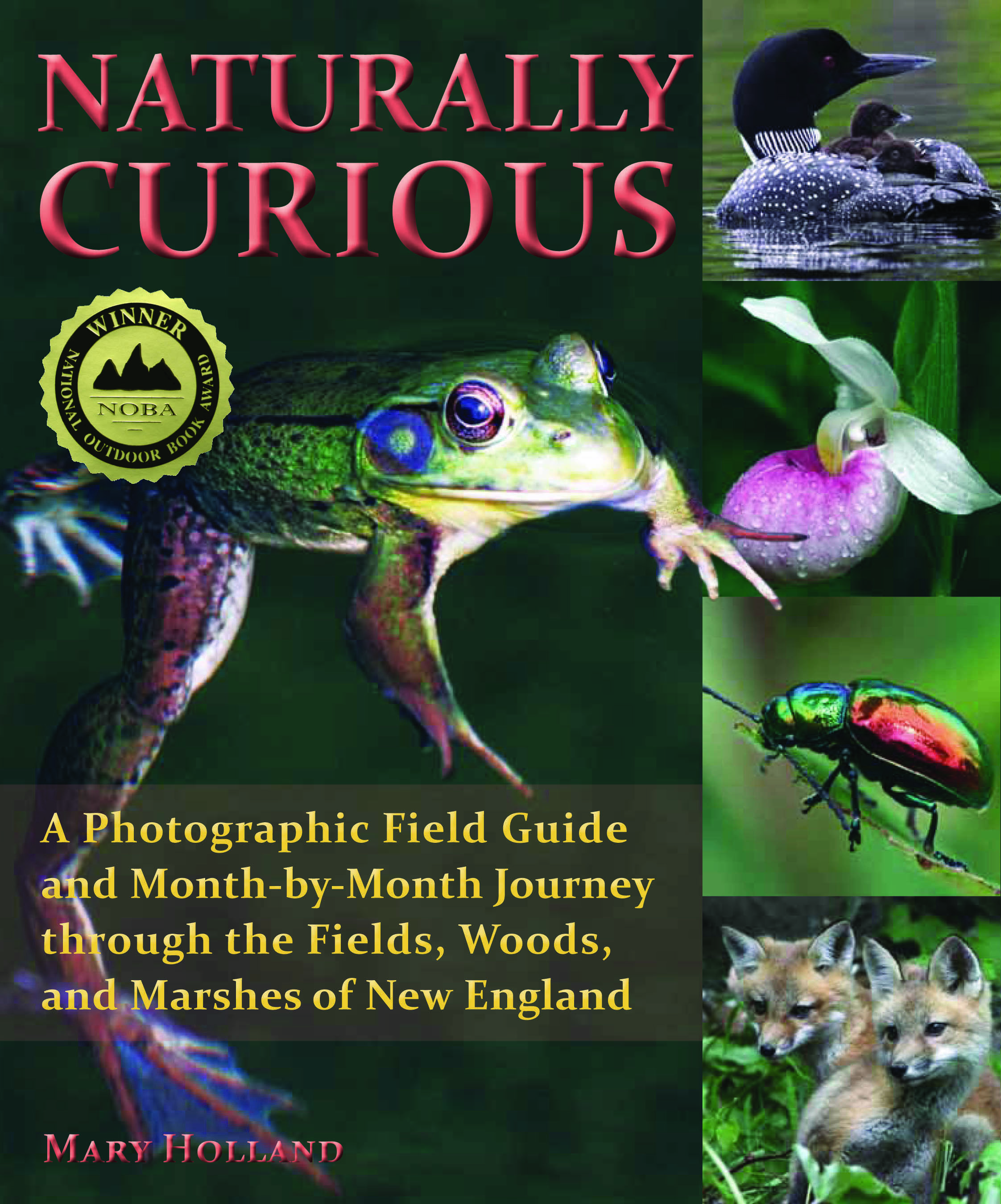 As you might assume from its appearance, Virginia Creeper (Parthenocissus quinquefolia) is in the Grape family.  This climbing woody vine clings to the surfaces over which it climbs with adhesive disk-tipped tendrils, which are actually modified flower stalks.  The disks form only after the tendril has made contact with a tree or other surface, at which point the disk secretes a cement-like substance, keeping the vine attached to the substrate long after it has died.  Although it superficially resembles poison ivy, Virginia Creeper has five leaflets (“quinquefolia”), as opposed to poison ivy’s three.  Virginia Creeper’s brilliant red fall foliage is thought to attract birds, which consume the blue-black berries and disperse the seeds.