The large, green swallow-tailed moth known as the Luna Moth (Actias luna) is familiar to many.  Its short life of about a week begins in June when it emerges from its cocoon, mates, lays eggs and then dies. The larval stage of this giant silk moth is not as well known, but has just as striking an appearance as the adult moth.  It is an unforgettable lime-green with tiny magenta spots along its length.

When threatened by a predator, Luna Moth caterpillars have several defensive behaviors, including emitting clicks as a warning and regurgitating the contents of their intestine, both of which have proved to be effective deterrents.  Look for these caterpillars on their host trees which include birch, hickory and walnut.  (Thanks to Susan and Dean Greenberg for photo op.)

Luna Moths, Actias luna, are known for their hindwings’ beautiful, long, green tails. These tails are not simply decorative, nor is their primary function to attract a mate (pheromones do that). A recent study found that Big Brown Bats have an easier time catching Luna Moths that have lost their tails. Further research revealed that Luna Moths defend themselves from voracious bats patrolling the night air by spinning the tips of their two wing tails in circles. The twisting tails of the moth act like a sonar shield, interfering with the bat’s means of locating them – echolocation. In contrast with the stronger, ever-changing echoes coming off of the moths’ large flapping wings, the twisted shape of the tails create a persistent weak echo signal. According to researchers, this could make the insects trickier to catch, and harder to track as they fly. 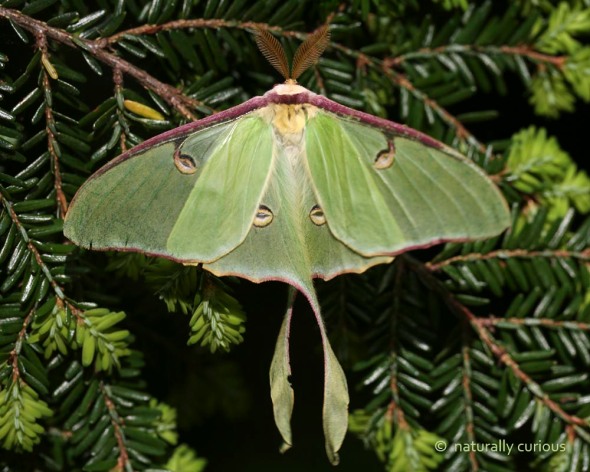 June is giant silk moth month, when these giant-bodied/winged moths in the family Saturniidae emerge.  Perhaps the most familiar giant silk moth is the Luna Moth, Actias luna. One of the largest moths in North America, its wingspan measures 4 ½ inches.  If you see one of these beautiful creatures, you are witness to its very short adult  lifespan.  After emerging from their cocoons, Luna Moths live for only about a week, during which time their sole mission is to mate. Like many other ephemeral insects, adult Luna Moths have no mouthparts and thus, do not eat.

Because moths need to use every little bit of light available in order to see in the dark, their eyes are highly non-reflective. (This is also helpful in decreasing the chances of predators spotting them.) Scientists, through biomimicry, have come up with a number of technological advances, including the development of a film that can be applied to solar cells which helps keep sunlight from being reflected off of them before the light can be utilized. Man-made materials based on the structure of moth eyes could someday reduce the radiation dosages received by patients getting x-rayed, while improving the resolution of the resulting images. Research on recreating the pattern found on moths’ eyes onto plastic could lead to reflection and glare-free display screens for televisions, cell phones, computer monitors, eyeglasses, speedometers and more. 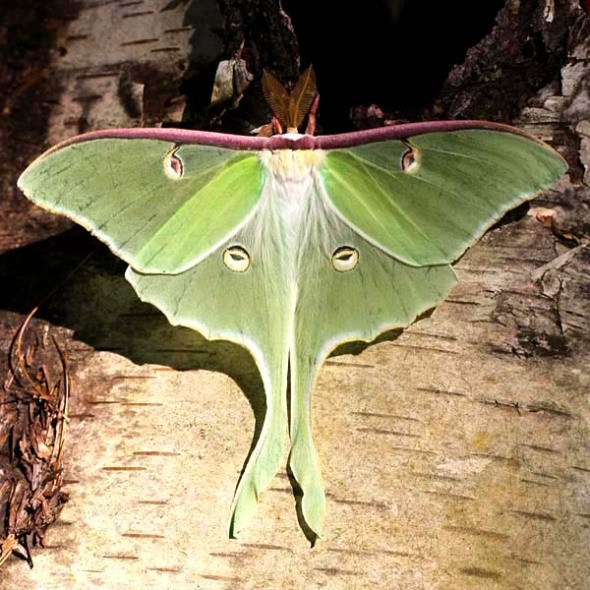 Yesterday’s post was, as you quickly guessed, an eyespot from the forewing of a Luna Moth, Actias luna, one of North America’s giant silkworm moths. With a wingspan up to 4 ½,” it is one of our largest moths. Markings that resemble eyes are found not only on moths, but also on butterflies, birds, fish and reptiles. When they occur on butterflies and moths, eyespots are usually on the wings and are thought to scare off potential predators as well as to direct attacks away from vital body parts. After emerging from their cocoons, Luna Moths live for only about a week, during which time their sole mission is to mate. Like many other ephemeral insects, Luna Moths have no mouthparts and thus, do not eat as adults. (The phenomenal number of Luna Moths this summer may, in part, be due to the mild winter we had, which allowed more pupae to survive.)