Snow Goose migration peaks from mid- to late October, as they travel from their breeding grounds on the western shores of Greenland and most of the eastern Canadian Arctic down the St. Lawrence Seaway to their coastal wintering areas (from Massachusetts down into North and South Carolina). In years past, the Dead Creek WMA, a 3,000 acre waterfowl refuge at the southern end of Lake Champlain in Vermont, used to be a primary staging area, where thousands of Snow Geese would stop and refuel in agricultural corn and grain fields on their way south. The sky would literally turn white with landing geese. Unfortunately for Vermonters, while some Snow Geese still stop over at Dead Creek, many now migrate further west, down through New York state, where apparently there is a more abundant supply of grain to feed on along the way.

After having spent a month or so incubating her eggs, the mallard hen begins to hear her ducklings vocalizing from inside their eggs, roughly 24 hours before they start to hatch. She responds with quiet calls, and begins turning the eggs frequently. Within 36 hours the ducklings crack open (“pip”) their eggs with the help of an egg tooth that is lost soon after they hatch. The down of the ducklings dries within 12 hours and often the morning after her young hatch, the hen leads them to water (not necessarily the closest water to the nest). She encourages them to follow her by quacking up to 200 times a minute as they travel over land to their watery destination. The ducklings can feed on their own, consuming mostly invertebrates and seeds. Once in the water, if the ducklings start to scatter, the mother can be heard repeatedly and softly quacking to her brood to gather them around her. She will continue to provide them with cover and warmth for the next couple of weeks, especially at night and during cold weather.

This is the time of year when the honking of migrating Canada Geese can be heard as the familiar V-shape formation passes overhead. Many of these birds have a long, arduous migration and they need to conserve as much energy as possible. The V-formation that they fly in enables them to do so, in that it greatly boosts the efficiency and range of flying birds. Geese flying in a V-formation have slower heart beats than geese flying solo, and they can achieve a distance of 71% greater than single birds. The birds in front make this possible by enduring the most air resistance and, at the same time, improving the aerodynamics of the birds behind them by reducing the drag by up to 65 percent. The geese are constantly rotating positions in order to share “flight fatigue.”

All North American birds replace their old, worn plumage with new feathers at least once a year, a process known as molting. Most birds have what is called a “sequential molt,” in which their flight feathers are lost one at a time (from each wing). This allows many birds to continue flying while molting. However, during their annual molt, waterfowl undergo a “simultaneous wing molt,” losing all of their primary wing feathers at once, preventing them from being able to fly for a month or more while their new primaries are growing in. During this period, they are extremely vulnerable, as this photograph testifies to. If you look closely at the remains of the Canada Goose’s wing on the right in the photograph (dark feathers), you’ll see that the new primaries have almost, but not quite, grown out of their sheaths, making them not yet functional. It’s apparent that this bird was unable to take flight during its molt in order to escape its predator. 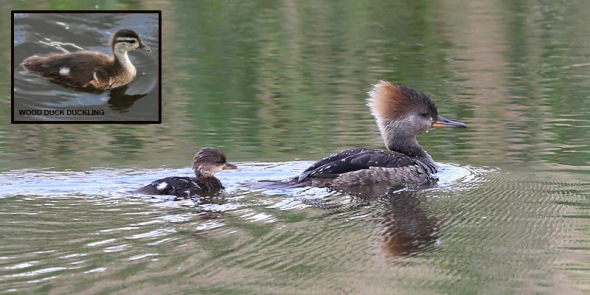 It’s been my life’s dream to witness the fledging of young wood ducks from their tree cavity nest in response to their mother’s calls below – perhaps this will be the year! Adult wood ducks have recently returned to northern New England, having already formed mating pairs. They now proceed to perform a number of courtship displays which enable them to maintain this pair bond. The most common display involves the male’s turning the back of his head towards the female as he swims in front of her while holding his wings and tail high. Chin-lifting, feather-shaking, wing-preening, neck-stretching and bill-jerking are just some of the displays that occur during wood duck courtship.

Common mergansers can be seen year round in northern New England, but in the spring their numbers peak around the first week in April, due to the large number of birds that wintered further south and are migrating to Canadian nesting grounds. These birds are fish eaters, known to consume at least 50 species which they easily grasp with their bill due to the sharp projections along its edges. Egg-laying is still a couple of months away, but coveted tree cavities where they nest are being scoped out. (female common merganser on left, male on right)