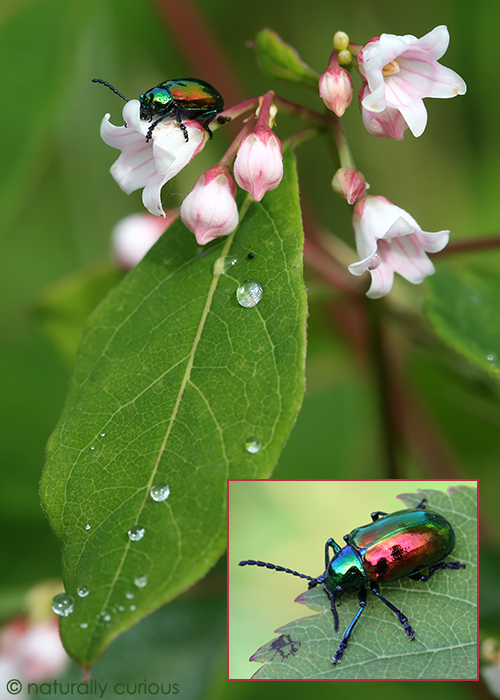 There is a group of 1,500-plus beetles in North America known as “leaf beetles.” They all have an expanded and two-lobed/heart-shaped section of their leg just above the claws. These lobes bear specially modified hairs which help these plant-eating beetles walk on plant stems and smooth leaves. The majority of leaf beetles are specialists, feeding only on a single species of plant or groups of closely related plants. Many leaf beetles are considered pests, including the Colorado Potato Beetle, Spotted Cucumber Beetle, Striped Cucumber Beetle, Spotted Asparagus Beetle and Northern Corn Rootworm Beetle.

One of the most striking leaf beetles, and one that is not a “pest” is the Dogbane Beetle (Chrysochus auratus), so called because its diet is restricted to the leaves of Dogbane (Apocynum androsaemifolium). Its distinctive iridescent green, copper, green and blue body is hard to miss. (Photo: Dogbane beetle on Dogbane) 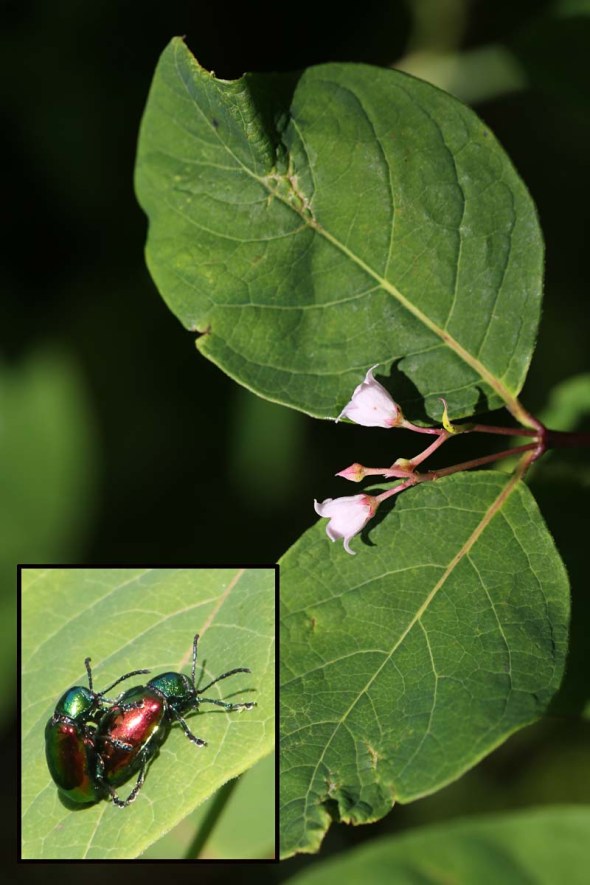 The tiny, pink, bell-like flowers of Spreading Dogbane (Apocynum androsaemifolium), emit a smell reminiscent of Lilacs. Like its milkweed relatives, Spreading Dogbane has milky, white sap and is poisonous to many species (hence, its name). Monarchs occasionally lay their eggs on its leaves, but the larvae do not mature. Associated exclusively with this perennial is its namesake, the Dogbane Beetle (Chrysochus auratus). A combination of iridescent greens, blues and gold make Dogbane Beetles one of the most striking beetles found in New England. They avoid some predators by giving off a foul-smelling secretion when they are touched. Dogbane Beetles are a third to a half-an-inch long and are often found in the process of mating at this time of year.