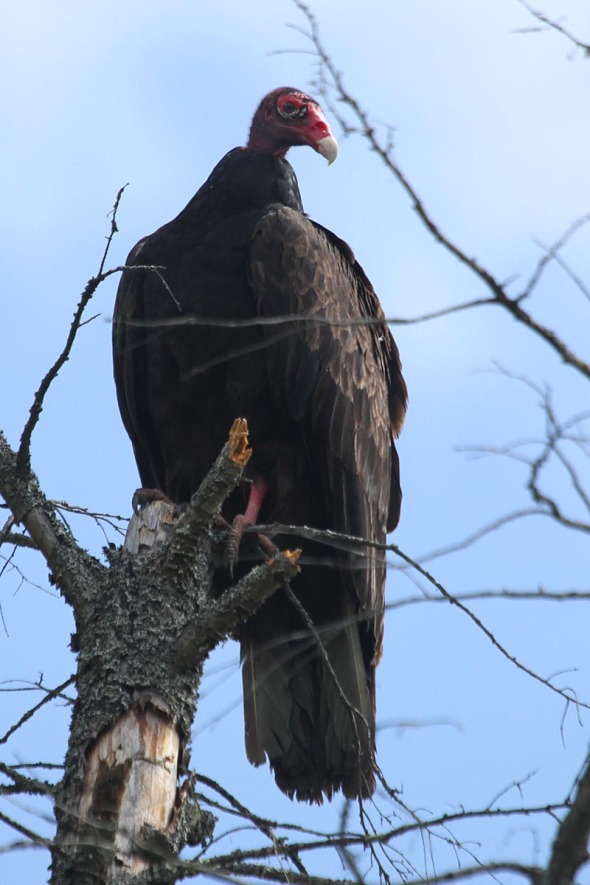 On some of the hot days we’ve had recently, my thoughts have turned to Turkey Vultures and their ingenious way of staying cool. They defecate on their legs and the subsequent evaporation cools the birds while strong acids kill bacteria.

When I saw these mallards swimming in a frigid brook yesterday the first thought that came to mind was how cold their feet must be.  Exactly how do birds avoid getting their legs and feet frostbitten?  We’ve all seen birds standing on one foot while the other leg is pulled up under their feathers, where it warms up. This is one way, but not the only way, birds protect their feet from freezing. Birds’ feet are mostly bone and tendons, so, unlike mammals, they have a limited supply of nerves, blood vessels or muscles to freeze.  Their feet are also covered with scales which, like our hair, aren’t living tissue and thus are less susceptible to freezing. Some birds, including waterfowl, gulls and penguins, have what is called countercurrent heat exchange — in their legs, arteries and veins run parallel and in contact with each other. As the warm blood of the arteries enters the legs, the heat is actually transferred to the returning cold blood of the veins. This allows the cooler blood to get heated up before re-entering the body, which prevents a lot of heat from being lost to the cold air.  Under very warm conditions, the countercurrent heat exchange mechanism can be bypassed.

Some birds, especially those that eat seeds, buds, leaves and nuts, such as ruffed grouse, eat food very rapidly, faster than it can be passed through the digestive system.  These birds usually have a pouch-like crop  where food is kept to be digested later, when the birds  are not out in the open, susceptible to predators.  When the grouse roosts, food leaves the crop and passes through the stomach, which has two parts: a proventriculus – an enlarged area where gastric juices begin breaking down the food, and a ventriculus, or gizzard, which is very muscular, and crushes hard items, such as nuts. According to Roger Pasquier, in Watching Birds, the evolution of an internal means of breaking down food has enabled birds to do away with the heavy teeth and jaws found in fossil birds.  Many birds, including grouse, swallow sand or gravel (you’ve probably seen birds on dirt roads doing this) which passes into the gizzard and helps grind up hard food items.  One photograph shows the contents of a grouse’s crop – bits of leaves, what I think are huckleberries, barberry fruits, buds and a twig—all intact.   If you look closely at the photograph of the gizzard contents, you will see, in addition to crushed fruits and seeds (and two pieces of what appear to be nuts in the upper left) that the grouse recently consumed, tiny bits of sand (upper right) which help in the grinding process.