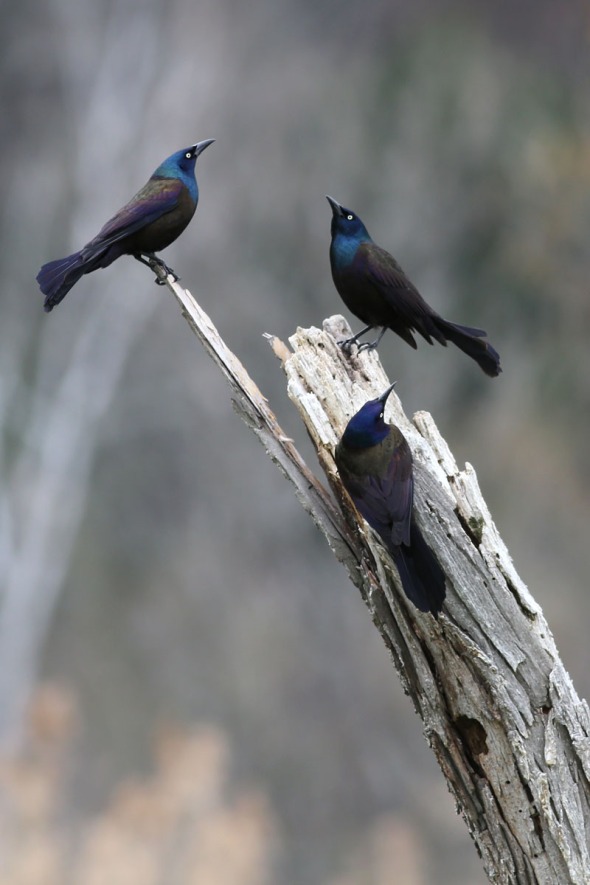 Male Common Grackles have started to arrive on their northeastern breeding grounds (females will arrive in another week or so), having migrated from southern U.S. Common Grackles typically migrate in large flocks containing hundreds of birds, not all grackles. Red-winged Blackbirds, Brown-headed Cowbirds, European Starlings and occasionally American Robins can be found alongside Common Grackles in these migrating flocks. In the early 1990’s, magnetic material was found in the heads and necks of Common Grackles, indicating that the geomagnetic field may play a role in their migratory navigation.

Although the common grackle, a member of the blackbird family, is the bane of many corn growers as well as a threat to songbirds trying to raise young (grackles eat other birds’ eggs and nestlings), it is quite a colorful bird, with its pale yellow eyes and iridescent purple plumage. Grackles have already begun nesting and defending their territory, as can be seen from the stance of the bird in this image. This “bill-up display” is a position assumed when a male is being approached on its territory by another male. It moves its head upwards so that its bill is almost vertical, signaling to the approaching grackle that it would be in its best interest to depart.