Sulphurs are a group of butterflies that are usually some shade of yellow, orange or white and have a wingspan between 1 ½ “ and 2 ½ “. The three species likely to be seen in New England are the Clouded Sulphur, the Orange Sulphur and the Pink-edged Sulphur. (Distinguishing one species of sulphur from another can be quite challenging.) Sulphurs always perch with their wings closed, and are commonly seen on flowers drinking nectar as well as puddling in muddy areas, where they obtain salts and other minerals.

Of the multitude of discoveries that every summer offers us, one of the most magical is that of  a Monarch Butterfly chrysalis.  While locating a Monarch larva is not all that difficult, especially when they are as prolific as they are this summer, finding a chrysalis doesn’t happen all that often. Most butterfly chrysalises are a rather drab brown, but the Monarch’s is a beautiful green which serves to camouflage it in fields where the caterpillars feed on milkweed and eventually pupate (form a chrysalis).  The Monarch caterpillar, when mature, usually seeks a sheltered spot under a leaf or branch where rain will not cause the silk button by which it hangs to disintegrate.  The chrysalis in the photograph is attached to a blade of grass which was anchored with silk to another blade of grass in order to make it more secure.  No matter how many I’ve seen, each one still takes my breath away.

If you’ve been traveling on sunny dirt roads lately, chances are that you have seen White Admiral butterflies all over them. They are in the road to obtain salts and minerals that have leached from the soil into standing puddles and moist dirt. Because butterflies do not have chewing mouthparts as adults, they must drink their meals. While nectar is their main source of nutrition, males often supplement their diet with these minerals. The act of acquiring nutrients in this manner is referred to as “puddling.” If there’s no water around, a butterfly may regurgitate into the soil and then drink in the hope of retrieving minerals. In addition to finding butterflies on dirt roads, look for them puddling on animal scat.

The male Eastern Tiger Swallowtail butterfly (pictured) is yellow with four “tiger stripes” on each of its forewings. The female can be yellow or black, and has more blue on the hind wings than the male. Eastern Tiger Swallowtails are currently mating and laying eggs on plants which their larvae eat, which include black cherry, red maple and American hornbeam. When the caterpillars first hatch, they resemble bird droppings – an effective way of decreasing predation. As they get older, the larvae turn green and have a large head and bright eyespots.

The butterfly known as the Question Mark is in a group of butterflies known as “commas” (a silvery comma can be seen on the underside of their hind wings) or “anglewings”  (for their sharply angled wing margins).  The Question Mark has a silver dot adjacent to the comma, turning it into a question mark.  When its wings are open, the question mark is fairly bright orange and quite noticeable, but when it closes its wings, it transforms into a dead leaf, for the undersides of its wings are dull brown and gray. This Question Mark was drinking sap from a wound in the trunk of a tree. These woodland butterflies prefer rotting fruit, mud, scat, carrion and tree sap over the nectar of flowers.

With the warm temperatures this week, mourning cloak butterflies have been seen gliding through the leafless woods.  Like eastern commas, question marks and red admirals, mourning cloaks overwinter as adults.  They resemble dead leaves so much that from a distance the entire insect seems to disappear.  Up close you can see the velvety texture of the wing scales, said to resemble the clothing mourners used to wear; hence, their common name. Mourning cloaks live up to ten months — an impressive life span for a butterfly.  As they age, the yellow border of their wings fades to an off-white.

Butterflies that Overwinter as Adults 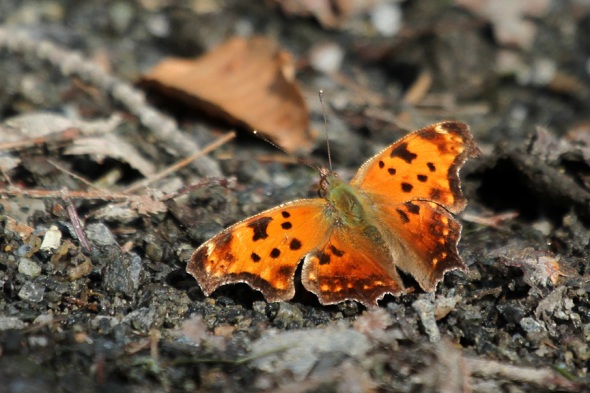 With all the warm weather this week, butterflies are suddenly appearing out of nowhere. Unlike most butterflies, which typically spend the winter as eggs or pupae (inside of chrysalises), red admirals, mourning cloaks and eastern commas (pictured) simply slip out from behind loose bark, where they overwintered as adults, and take to the air. Those species of butterflies which spent the winter as eggs or pupae must undergo metamorphosis this spring, and won’t appear in their adult form until later in the year. With so few wildflowers out now, especially this year, sap from broken tree branches sustains early-emerging butterflies!

It’s hard to believe, but even after Irene, several inches of snow and an occasional night that’s below freezing, there are still butterflies and moths to be seen. Yesterday this sulphur butterfly (probably clouded, Colias philodice) was flying from dandelion to dandelion, sucking up nectar with its long, black proboscis.  Clouded sulphur and orange sulphur butterflies, two different species, are similar looking, and on top of that, they even hybridize, so distinguishing between the two is often difficult, at best.  Both species have several broods in a summer; you can see them flying in fields and along roadsides from spring to fall.

This 15-minute-old monarch butterfly that emerged yesterday will live for 2 to 5 weeks, long enough to mate and produce the next generation of monarchs.  The generation of monarchs that emerges a month or more from now will live six to nine months, and not mate until next March or so – after flying  to one of about a dozen locations in the Transvolcanic Mountains of central Mexico (a flight of up to 3,000 miles) and spending  the winter.  Late summer-emerging monarchs live longer than monarchs that emerge earlier in the summer because they do not immediately expend energy on breeding and the cool winter temperature in Mexico slows their metabolism, allowing them a longer life.

The third and fourth generations of the monarchs that migrated from New England to central Mexico last fall are arriving in New England, mating and laying eggs.  The eggs are hatching, and some of the larvae, or caterpillars, are well on their way to adulthood.  This larval stage of their metamorphosis lasts about two weeks, and is the only stage during which monarchs have chewing mouth parts. The caterpillars take advantage of this by consuming both the leaves and flower buds (see photograph) of common milkweed practically non-stop, increasing their body mass up to 2,000 times.