Flocks of Snow Buntings have been observed more frequently lately, perhaps because male buntings have begun their migration back to their nesting grounds on the tundra.  They are the first migrants to arrive in the Arctic in the spring (in early April), when it can be -20°F. Females arrive four to six weeks later, when days are warming and snow is beginning to melt.

It is thought that the males’ early return is related to the fact that, unlike most Arctic songbirds, buntings nest in rock cavities, for which there is great competition. Deep inside narrow cracks, nesting buntings can largely avoid nest predation, but their eggs are susceptible to freezing and require longer incubation than eggs laid in the open. As a result, females remain on the nest throughout much of the incubation period and are fed by the males. This arrangement shortens incubation time and provides the eggs with constant protection from freezing temperatures. (Photo:  can you find the lone Lapland Longspur?) 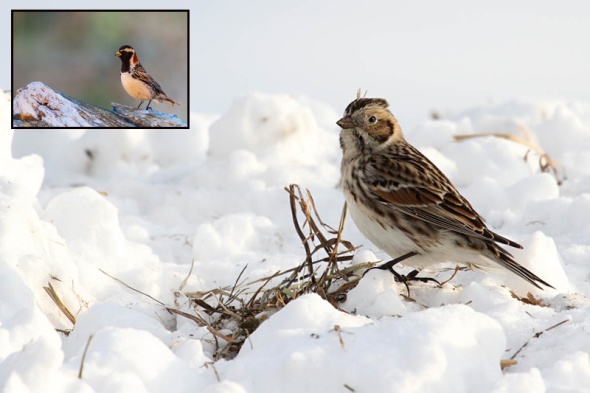 The Lapland Longspur, named for the unusually long claw on its hind foot, breeds in the Arctic tundra and overwinters near fields throughout the northern half of the U.S. in flocks numbering up to four million birds.

Lapland Longspurs have two distinctly different plumages, especially the males. Their winter plumage (see photo) is streaked brown and somewhat dull. However, in the summer, the male’s plumage is very dramatic (see insert). The back of his neck, or nape, is bright rufous orange and black feathers form a distinctive facial mask and bib, bordered by a white stripe.

Unlike most birds with different breeding and non-breeding plumages, longspurs molt only once per year, in the fall, into their non-breeding plumage. How can the males look so different in the breeding season if there isn’t a second molt? By spring, the outer tips of these feathers have worn off to reveal the males’ (and females’, but to a lesser degree) distinctive breeding plumage underneath. (Insert photo from public domain)