Female Eastern Coyotes only experience estrus once per year for up to ten days and male coyotes only produce sperm during the time females are receptive.  This usually occurs sometime between late December through March.

One unusual aspect of the coyote breeding season is the coyote’s ability to change its breeding habits according to its population status. When their population is threatened and/or pressured, coyote litter sizes go up. They use their howls and yipping to assess coyote populations — if their howls are not answered by other packs, it triggers a response that produces large litters. (I have yet to understand the biological specifics of  this adaptation.)

The normal size of a coyote litter is five to six pups. When their populations are suppressed, their litters get up as high as 12 to 16 pups. Research shows that the number of coyotes in a given area can be reduced by 70 percent but the next summer their population will be back to the original number. 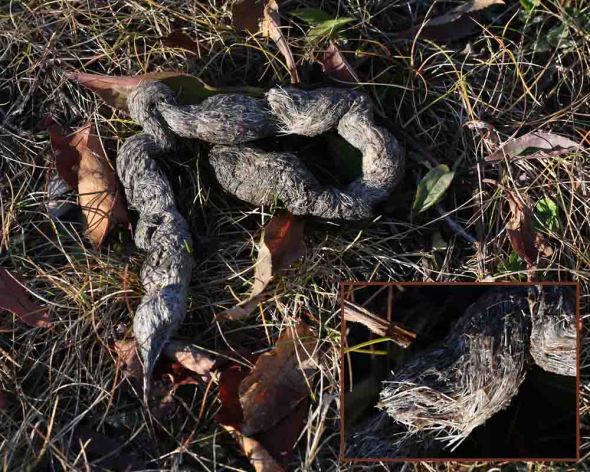 Predators and scavengers of all stripes are reaping the benefits of deer hunting season. A close look at the composition and form of the pictured scat reveals much more than the fact that a coyote dined on a white-tailed deer. Note that the scat consists almost entirely of deer hair. When a predator such as a coyote comes upon a carcass, it tends to eat the internal organs first, which produce black, moist, soft scats with next to no bones or hair in them. As it continues to feed, the coyote’s scats contain more and more bones and hair, until eventually that is all they consist of.

There are two conclusions one could make when analyzing this scat. One is that the coyote whose scat this is was finishing up the tail end of a deer carcass. It is also possible that this coyote might not have been at the top of its pack’s hierarchy. The alpha pair usually has first dibs on the internal organs, with lower members of the pack having access to the less choice parts, such as hair and bones.