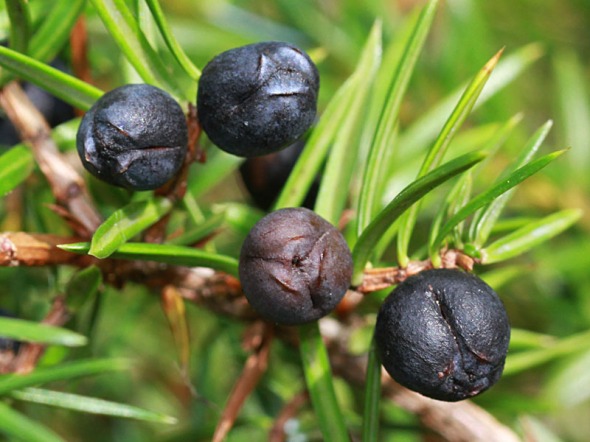 Common Juniper (Juniperus communis) is one of the few evergreen shrubs in New England and has one of the largest ranges of any woody plant.  You often find it in old pastures and meadows, where its sharp needles protect it from most herbivores.   It is a member of the Pine family, and even though its fruits look like berries, structurally they are cones (with fleshy scales).  Whereas most of the cone-bearing members of the Pine family disperse their seeds in the wind, Common Juniper uses birds and mammals to do this deed.  Cedar waxwings, evening grosbeaks and purple finches consume quantities of juniper fruit, and many other songbirds are frequent visitors.  White-footed mice and white-tailed deer occasionally eat the fruit as well.  While not aiding the dispersal of seeds, humans do use the fruit to flavor gin.

Possibly because of the importance of summer fruits in their diet, Cedar Waxwings (Bombycilla cedrorum) are late nesters, but by late August adults have begun their migration to the southern states and Central America.  This year’s young are beginning this (roughly) 900-mile flight now, a month after their parents have left. You can often find waxwings feeding in crab apple and other fruit trees where they stop over during their flight to refuel.  Juvenile birds lack the sleek look of adults — the red wax-like feather tips for which this bird is named have not developed, and the color of their plumage is much duller than that of the adults.

Several of the secondary flight feathers (inner wing feathers) of Cedar Waxwings and Bohemian Waxwings possess tiny, brilliant red tips. (As Dale Martin pointed out, there is a bit of white next to the red tips of Bohemian Waxwings’ feathers, but those who guessed either waxwing should take a bow.) These “waxy droplets” give the bird its common name, along with its love of red cedar berries.  These drops of “wax” are actually the widened, flattened ends of the feather shafts.  The color is derived from a carotenoid pigment, astaxanthin, which they get from their diet (cedar fruit and other berries).  Younger birds possess fewer red tips than older birds. Ornithologist Peter Stettenheim conjectures that since the waxwing’s ability to find berries probably improves with age, the number, size and coloration of these tips may indicate the birds’ foraging ability.  Research in the 1980’s indicates that these red tips serve as markers in mating, providing visual clues to potential mates about each other’s age, which correlateswith egg size, clutch size, as well as ability to find and deliver food.  Cedar Waxwings tend to mate with individuals of their own age. 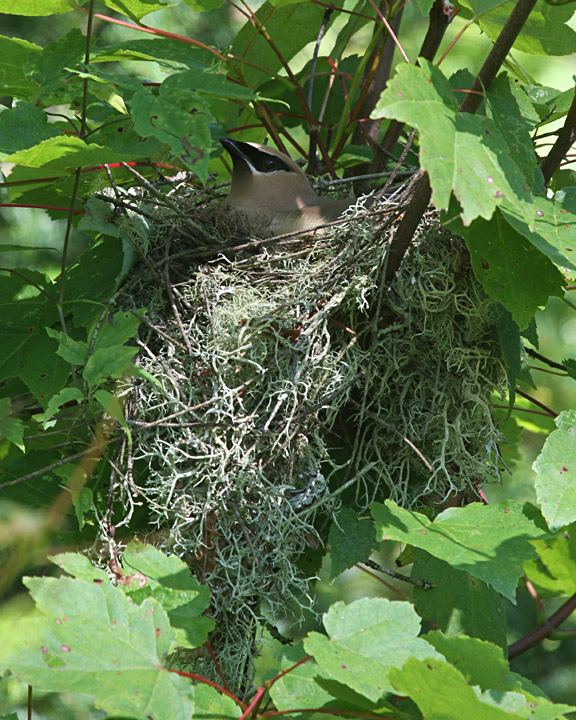 While the nestlings of most species of birds have fledged, some cedar waxwings are still incubating eggs.  Known for being one of the last species to nest, a waxwing on a nest in mid-August is probably on its second brood.  Both the male and female collect nesting material, but it is the female who does most of the nest construction, and all of the incubation of the eggs.  The cup nest is constructed with a wide variety of material, including twigs, grasses, cattail down, moss, string, horsehair, dead leaves, cloth, shredded bark, roots, leaves, ferns, stalks of herbs and flower blossoms.  Occasionally the exterior of the nest is decorated with ornate plant material, such as the lichen (Usnea , or Old Man’s Beard) in the photograph.