Pitcher plant leaves are primarily green in the summer, tinged with red, but as summer turns into fall, many become deep red. Although this red color was thought to attract insects, it appears that this is not the case. The color change, according to research cited in the Journal of Ecology, is due to the level of phosphorus this carnivorous plant has received from its insect meals. There is a limited amount of phosphorus in a bog and plants living there acquire it in different ways. The pitcher plant acquires phosphorus from insects that it traps. It then utilizes the phosphorus to revitalize the (green) chlorophyll in its leaves for photosynthesis. The deep red color that the leaves turn in the fall indicates that the plant has not had a good meal in quite some time.

The falling of a leaf is the final step in an ordered series of events referred to as senescence. This process allows trees to conserve resources, prepare for a dormant period, and shed inefficient tissues. When leaves become unable to produce food due to a lack of chlorophyll, a process of shutting-down and sealing-off begins. Leaves are shed through a number of biological actions which take place at the base of the leaf’s stem, or petiole. The walls of some cells weaken, while those of other adjacent cells expand. The expansion of the latter causes pressure against the weaker-walled cells, resulting in these two groups of cells tearing away from each other, causing the leaf to fall. The tree forms a protective barrier on the wound where the leaf had been attached to the branch, sealing it off from pests and the environment and leaving a leaf scar.

Why Many Lichens Are So Green After It Rains 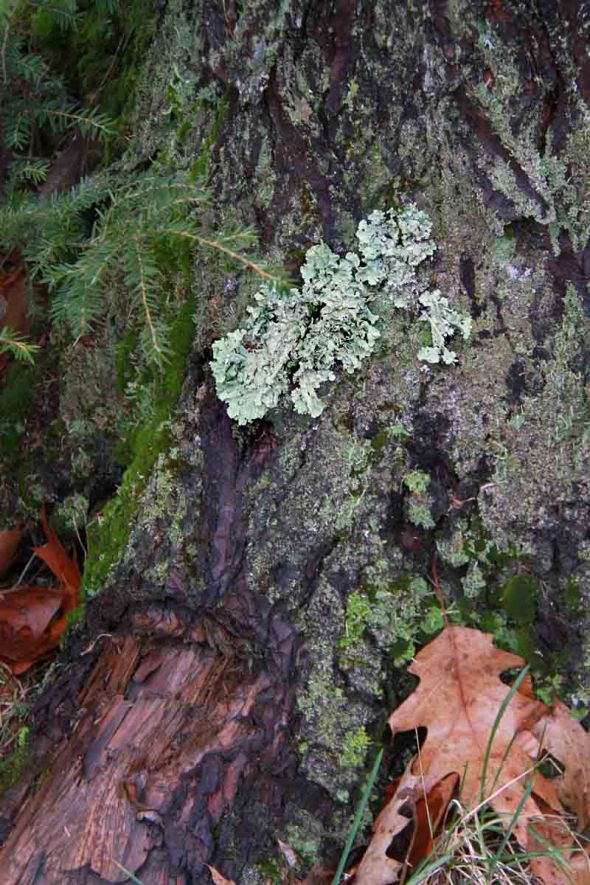 Have you ever noticed that the color of some lichens is a more intense green after they get wet? There’s a very good explanation for this phenomenon. Lichens are made up of an alga or cyanobacterium and a fungus. The alga or cyanobacterium makes the food, and the fungus absorbs the water. A typical lichen has a three-layered structure. A middle layer containing algal cells entwined in threadlike fungus fibers called hyphae is sandwiched between two layers of fungal tissue. Lichens that turn bright green after it rains contain green algae which contains chlorophyll, a green pigment. When it rains, the fungus (which surrounds the algae) soaks up water like a sponge, causing the fungus to become more transparent, which allows the green pigment of the algae to be seen more clearly.