Loons begin a full body molt (minus their wings) in the late summer and early fall, prior to migration. The black and white breeding plumage of adult loons in summer is replaced by the gray-brown of winter. This process typically begins at the base of the bill and spreads across the head and over the upper back. The process of molting can extend through migration on into December.

Generally speaking, Common Loons return to northern New England from their coastal wintering waters sometime in April or May. Males and females pair up after they arrive at their ponds, and several weeks later they breed and build a new nest or renovate an old one, with the male choosing the actual nest site. Successful nests sites are often reused from year to year, especially if the male returns. Protection from wind, waves and predators is paramount. Because their hind legs are positioned so far back on their body, loons are awkward walkers, at best. Thus, they usually build their nest adjacent to water so that they can easily slip onto and off of it. The nest is constructed during the day by both adults and is made of vegetation that the loons collect close to the nest. A loon often sits on the nest while collecting material, stretching its head down into the water in order to retrieve vegetation which it then places on the nest. Two eggs are laid, usually between mid-May and early June. After being incubated by both parents, the eggs hatch in roughly 28 days. As this photograph indicates (egg just visible below loon’s body), material continues to be added to the nest during incubation.

Aging a Common Loon Chick by its Plumage

This year’s Common Loon chicks are now roughly two months old.  Even without being aware of when it hatched, you can estimate the age of a chick by looking at its feathers.  Their color and type (down or contour) can give you a good idea of how many weeks old it is. Common Loon chicks are born covered with sooty-black down.  By the time they are three weeks old they have replaced this natal down with a second (gray-brown) down.  Juvenal feathers start appearing soon thereafter, replacing the down — the age of a chick can be estimated by the amount of down that remains.  By eight weeks of age the chicks have just small tufts of brown down remaining on their head and neck (see photo).  By nine weeks of age their entire body, including their head and neck, are covered with smooth, gray contour feathers and there is no sign of down. 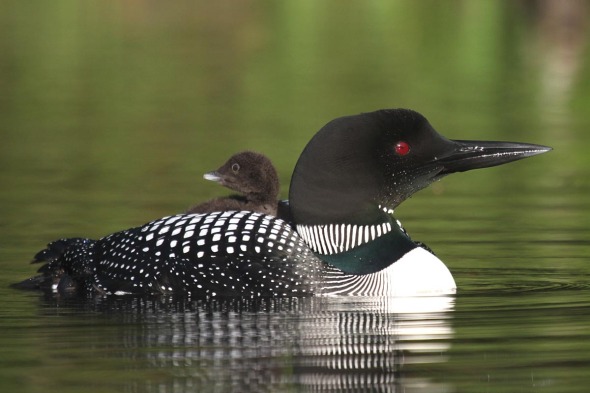 Like many flowering plants that blossomed two or three weeks early this year, Great Northern Loons (previously called Common Loons) got an early start to their nesting season. While some adults are still sitting on eggs, some chicks can be seen hitching a ride with their parents. Even though chicks can swim as soon as their down dries, their inability to regulate their body temperature for the first two weeks and their need for protection from predators at this vulnerable time, they are brooded on the backs and under the wings of their parents. After a couple of weeks, however, the chicks are under their own steam and can be seen bobbing in the water near their parents.  (Kayakers and photographers — extreme caution should be taken to avoid approaching loon nesting areas too close at this time of year.)

Recently Common Loons have been seen on several Vermont lakes and ponds.  Spring arrival on nesting lakes depends largely on the timing of ice-out. During migration, Common Loons have what are called “staging” areas — lakes as well as rivers, where many loons congregate as they proceed northward (southward in the fall). Reconnaissance flights are usually made from open water north to territorial waters to see if the ice is on its way out.

Since hatching in July, the downy, sooty black common loon chick has matured in to a sleek, brown juvenile, close to its parents in size.  Even so, adult loons are still caring for and feeding their young, though far less so than earlier in the summer, as juvenile birds are now foraging on their own.  Roughly nine weeks old, the young bird accompanying its parent in the photograph will be airborne in three weeks or so, but for the most part will remain on its natal pond or lake.  Juveniles typically don’t leave for their salt water wintering grounds as long  as there is open water — long  after their parents have migrated.