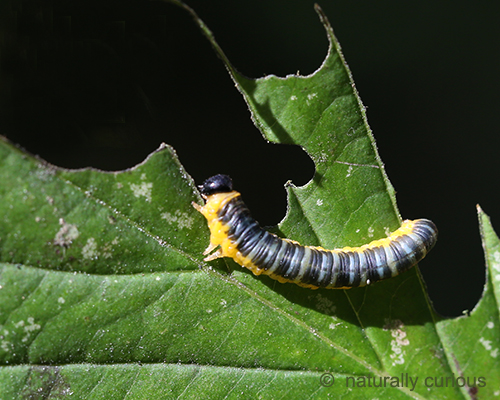 Upon inspecting a skeletonized Alternate-leaved Dogwood (Cornus alternifolia) recently, I found the culprits responsible. Wasp-like insects called Dogwood Sawflies (Macremphytus tarsatus) were eating every vestige of leaf (except for the midveins) on the tree. Although called sawflies, they are not true flies — they are in the same order (Hymenoptera) as ants, bees and wasps. The first part of their common name comes from the saw-like appearance of the females’ ovipositor which they use to cut into plant tissue and lay eggs.

Dogwood Sawfly eggs are laid in dogwood (any Cornus species) leaves in the spring. A translucent yellow larva hatches from each egg. As a larva feeds on dogwood leaves, it grows and molts several times. After molting a second time the larva is covered with a powdery, white waxy coating which makes it look like a bird dropping (a survival technique used by several species of insects). After the final molt it is yellow below with a single row of black spots above (see photo).  In late summer or early fall, Dogwood Sawfly larvae seek shelter in logs or other decaying wood, and pass the winter in a pre-pupal state in cocoons made of rotted wood. They pupate in the spring, emerge as adults, mate and lay eggs.