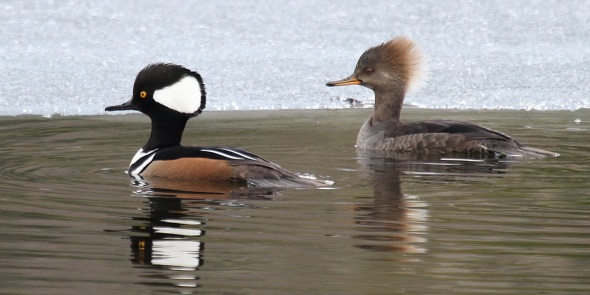 A few hooded mergansers, small fish-,insect- and crayfish-eating ducks of wooded ponds,  can be found year round in northern New England, but their numbers swell in March and April, when many migrant birds return to breed, and  others  stop over on their way further north.  Standing dead trees, or snags, provide nesting cavities for these beautiful, “hammerhead” crested ducks. (Male hooded merganser on left and female on right in photograph.)

As dusk approached, a Redhead (Aythya americana) drake repeatedly disappeared under water, coming up with a mouthful of aquatic vegetation each time it dove. Suddenly an agitated Crow started cawing nonstop.  Soon thereafter a Bald Eagle soared overhead, scanning the open water for its next meal.  The Redhead immediately dove, and wasn’t seen again for several minutes. Knowing it couldn’t hold its breath for that period of time, I began looking more carefully for where it had surfaced. Eventually I found it seeking shelter from above, tucked under a snag which had fallen into the pond.