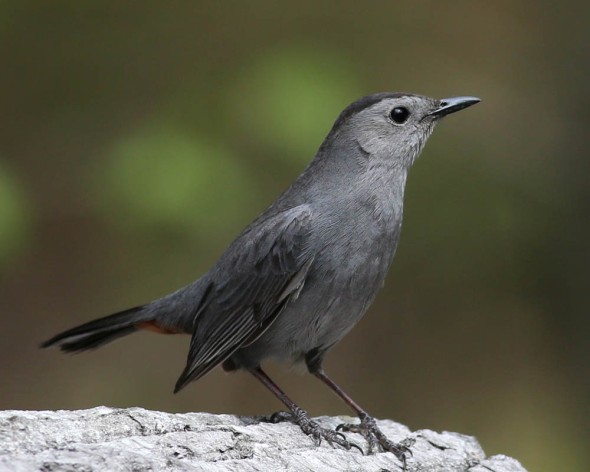 Gray catbirds begin their nocturnal migration to wintering grounds in late August and early September. The last of the stragglers are now passing through northern New England. Catbirds winter from the southern New England coast south to Panama, with concentrations on the U.S. Gulf coast and the Yucatan Peninsula. Those individuals that winter in the Yucatan Peninsula and Central America cross the Gulf of Mexico, and in order to do so they put on so much fat (during fall migration their mass may increase to 150% of lean body mass) that it approaches the upper limit of what flight allows. 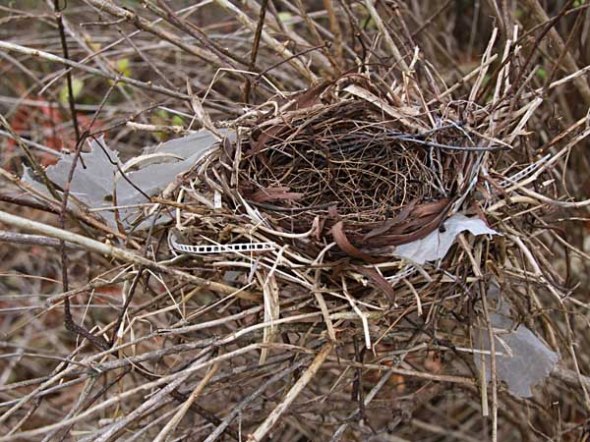 Now that the leaves are off the deciduous trees, it is much easier to see where songbirds nested this past summer.  Just as every songbird species has a specific song unlike that of other species, each species also constructs nests that are very similar to each other, but not to other species’ nests. Thus, one American robin nest looks a lot like any other American robin nest – nests of one species are usually found in roughly the same kind of habitat, with the same dimensions and similar building materials. Sometimes there are key characteristics that help with identification – grape vines and a lining of rootlets told me a gray catbird built the nest in the photograph. (Plastic told me humans weren’t  far away.) Most songbirds only use their nest once; after the young have fledged, they abandon their nests.  Before the weather and/or critters recycle this year’s nests, take advantage of the opportunity to examine these gems of avian architecture up close. (A federal permit is needed in order to collect bird nests.)  A good book for nest identification is Peterson’s Field Guide to Bird Nests.