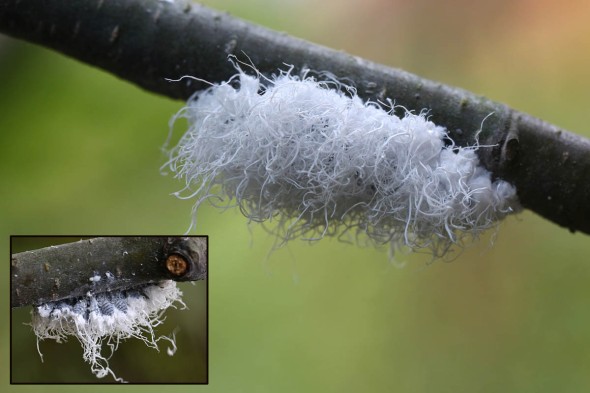 Woolly aphids are just that – aphids that have special glands that produce wax-like filaments which resemble white wool. When the “wool” is brushed aside, the dark aphid bodies below are apparent. Colonies of woolly aphids often congregate in cottony masses while sucking the sap of a host plant or tree, at which time they are somewhat camouflaged in that they can easily be mistaken for mold or a fungus. When woolly aphids take flight, the wax strands catch the wind and allow them to drift , allowing them to look more like seeds than edible prey.

Naturally Curious is supported by donations. If you choose to contribute, you may go to http://www.naturallycuriouswithmaryholland.wordpress.com
and click on the yellow “donate” button.

Lobster mushrooms  are so named because they look a bit like lobsters – red/orange “shells” on the outside with white inside. A lobster mushroom is actually two fungi in one – the parasitic  fungus, Hypomyces lactifluorum (red/orange outer crust), and the mushroom being parasitized by the lobster mushroom (white, inner flesh, usually a Russula or Lactarius mushroom). Hypomyces lactifluorum has only been known to parasitize non-poisonous mushrooms and it has been eaten for hundreds of years without any known problems. Still, it is conceivable that it could parasitize a poisonous mushroom, rendering it harmful to the forager. 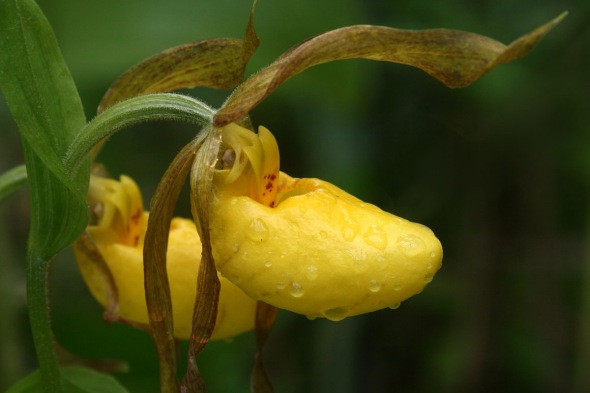 Yellow lady’s slipper, Cypripedium pubescens, is in flower in central Vermont/New Hampshire, gracing woodlands and bogs with its beauty. This plant has what is called a mycorrhizal association, a relationship with a fungus that colonizes its roots. This mutually beneficial association provides the fungus with carbohydrates from its host plant, the yellow lady’s slipper, and enables the yellow lady’s slipper to have increased mineral absorption due to the fungus’s large surface area. More than 90 percent of plant species are believed to form a symbiotic arrangement with beneficial soil fungi. 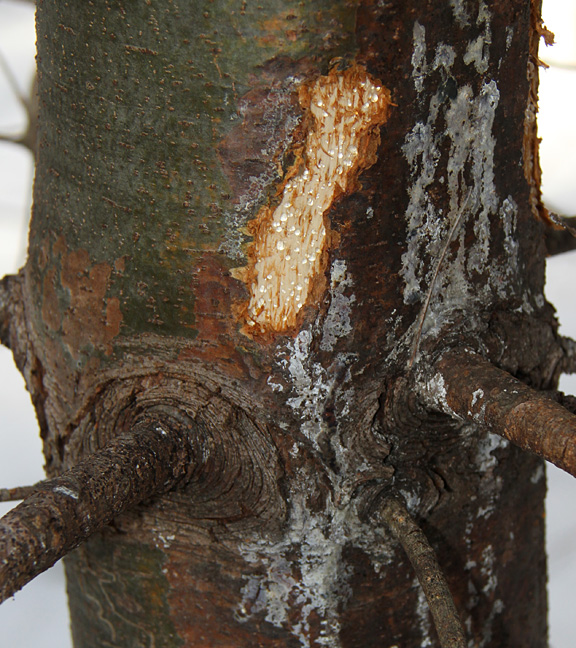 When a white pine has been infected with white pine blister rust (a fungus), cankers appear on the branches and sometimes the trunk of the tree.  A large amount of sap-like ooze flows from the cankered areas, sometime drying and resembling a sugary-looking crust or film.  These areas are, in fact, high in sugar content, and rodents frequently chew them.  It’s likely that a red squirrel visited and sampled the infected white pine in the photograph, leaving a freshly-gnawed patch in the bark.

The way I discovered this netted stinkhorn fungus (Dictyophora duplicata) was the same way flies find it – the odor emanating from it is much like that of a decomposing body.  This odor comes from the spores of the stinkhorn – the  slimy, olive-green matter on the head, or top portion of the fungus.  When mature, the spores have a fetid odor which successfully lures insects to the stinkhorn.  They eventually depart from the fungus, and procede to disperse the spores that stuck to them far and wide.   Although it’s not too discernible in these photographs, netted stinkhorns derive their name from a fishnet-like veil, or skirt, below the head of the fungus.

It is not hard to figure out how coral fungus got its name, with its branching fruiting bodies that resemble aquatic coral.  These fungi come in a rainbow of colors – white, yellow, orange, red, purple and tan, depending on the species.   Typically found growing on the forest floor, coral fungi bear their spores on the sides of their branches (not on or ingills or pores, like many fungi).  All fungi that look like coral were originally lumped into one group, but DNA analysis has determined that while these fungi may look alike, there are many differences between them, and taxonomically they belong to many different families. While many species are edible, some species are poisonous, and distinguishing between the two can be extremely challenging. 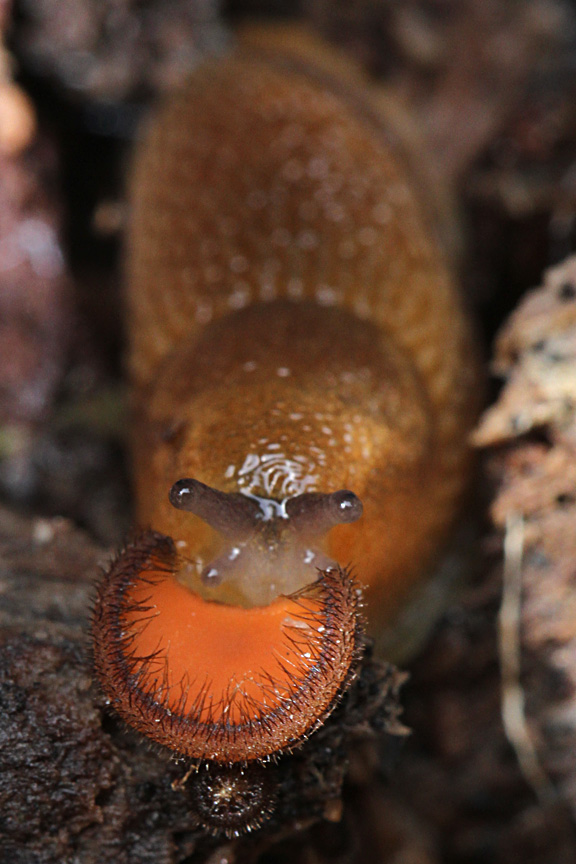 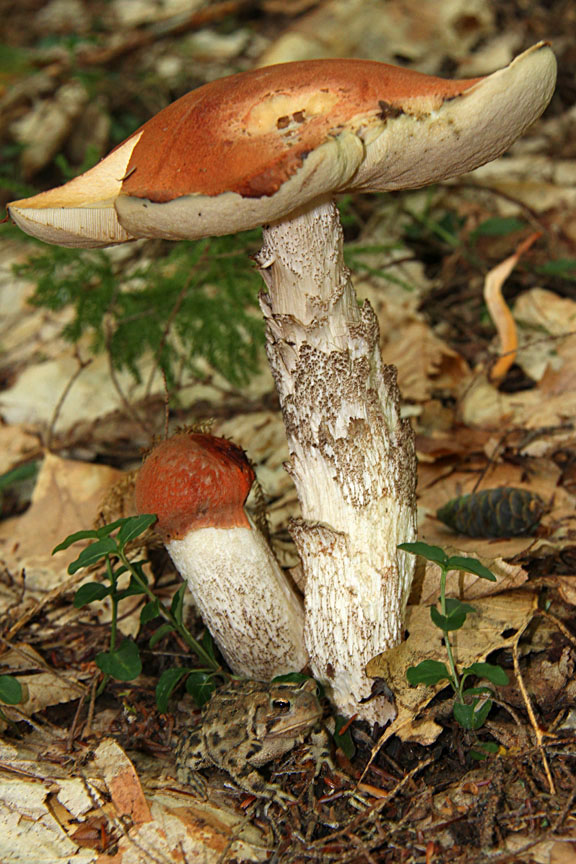 Look closely at the base of this fungus for its true namesake. 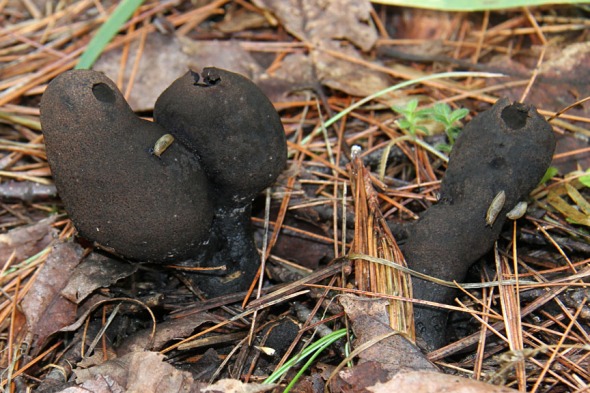 Dead Man’s Fingers (Xylaria polymorpha) is a fungus that can be found growing from the bases of rotting stumps, and gets its common name from the way its fruiting body pokes up through the ground like a dead man’s fingers.   “Xylaria” refers to growing  on wood and “polymorpha” means many forms.  This species has a very variable fruiting body, sometimes with many separate “fingers” and sometimes with the fingers fused into something more like a hand. 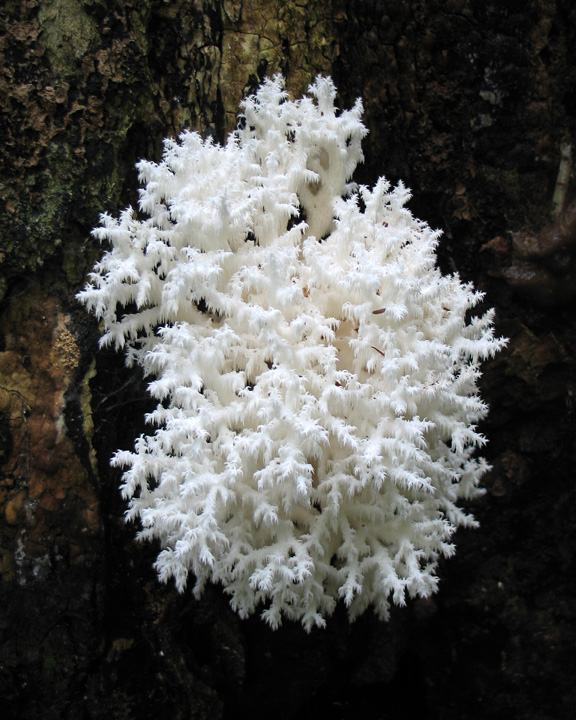 If you take a walk in the woods right now, you’ll find that overnight the fruiting bodies of a wide variety of fungi have popped up all over the forest floor, none more obvious than the white Comb Tooth fungus (Hericium coralloides).  It is delicately branched and covered with fleshy spines most of which are under half an inch in length.  Look for Comb Tooth on fallen hardwood branches, logs and stumps, particularly those of American Beech and maples.   If you are with someone whose fungus identification skills you trust, and they confirm that you have found Comb Tooth (the fungus it most resembles, H. americanum, or Bear’s-head Tooth fungus, is also edible), you are in for a treat, for it is one of our tastiest fungi. 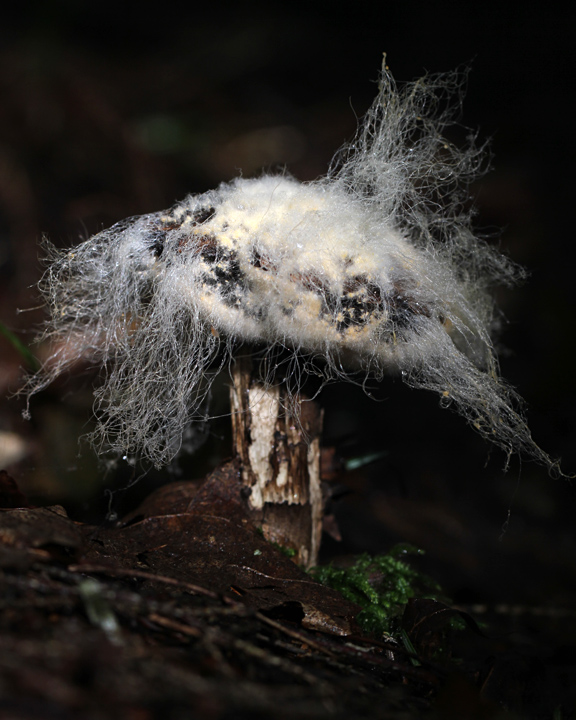 It’s a well-known fact that fungi, along with invertebrates and bacteria, are responsible for the majority of plant and animal decomposition that occurs.  They are very efficient at breaking down organic material into simpler forms of matter that can then be recycled.  Seeing  this mushroom, the fruiting body of a fungus, undergoing  the same process  with which it is associated reminds me of the porcupine with a face full of quills it received from its relative. 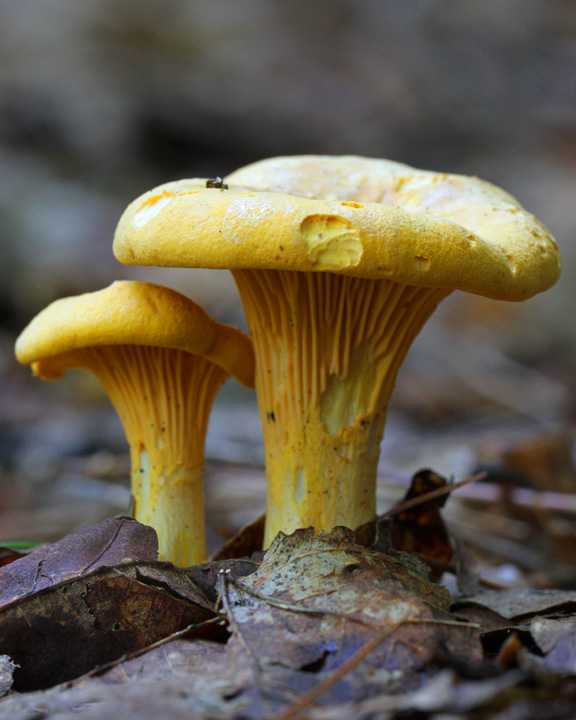 The Chanterelle family of fungi includes some of the best known edible wild mushrooms.  The chanterelle pictured, Cantharellus cibarius, is considered a delicacy, but there are poisonous mushrooms that look very much like this chanterelle, so you should only consume one if someone you trust has identified it.  Most chanterelles are either convex or vase-shaped, and instead of true gills, these mushrooms often produce spores on ridges or folds.  Most chanterelles grow on the ground and appear at this time of year.