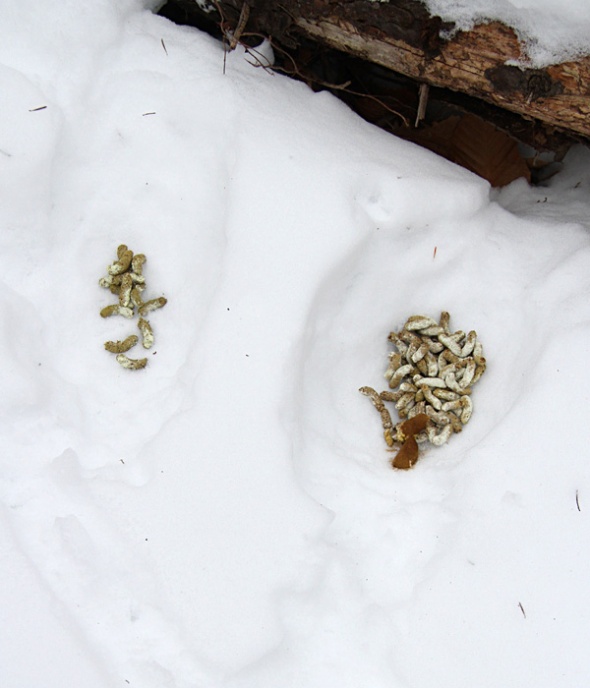 Some birds, especially those that eat seeds, buds, leaves and nuts, such as ruffed grouse, eat food very rapidly, faster than it can be passed through the digestive system.  These birds usually have a pouch-like crop where food is stored to be digested later, when the birds are not out in the open, susceptible to predators.  (see 10-24-12 Naturally Curious post)  This rapid consumption and storage of food by grouse, often at dawn and dusk, is referred to as “budding.”  Examining the contents of road-killed grouse crops is one way of learning more about this adaptive behavior.  Assuming some of my readers might (?) share my curiosity about the diet of grouse, I occasionally post the contents of a grouse crop I’ve recently examined.   My most recent dissection revealed that the grouse had switched from its herbaceous summer diet to its more woody winter diet — its crop contained no less than 232 male birch flower buds, or catkins.  (Disclaimer:  This crop was not that of the grouse that was the subject of the 11-9-12 post.)

If you look closely, you’ll see that there are two broods accompanying one hen turkey in the photograph — seven smaller, younger poults (nearest the bottom of the photo) and ten larger poults (closer to the top of the photo). Chances are that the hen is not the mother of all the poults. It’s likely that the young of another hen joined a hen and her brood. While this is not common, it is not unusual to see two or more hens with their respective broods flock together during the summer. First year males leave the hens and female poults to form independent flocks in the fall. Females (several hens and their poults) often join together during the winter months forming large flocks, and in the spring, as the breeding season approaches, break up into smaller flocks which will include one or more males.

If you stumble, as I did, upon a female Ruffed Grouse whose eggs have recently hatched, be prepared for her fury! When I entered nearby woods, the mother charged at me with her crest raised, tail spread and ruffs (black neck feathers) erect. (Her chicks had dispersed prior to this, well hidden by their camouflaged down.) Fiercely protective, female grouse with young are known for their aggressive behavior. A large grouse might weigh two pounds – to tackle a human weighing more than 50 times as much as oneself is pretty impressive.

Well done, those of you who guessed Wild Turkey, which was most of you! Charlotte Carlson not only discovered their nest, but managed to photograph the hen and tom turkey in the act of making the eggs!