Wood Turtles — Aquatic & Terrestrial, Depending on the Season 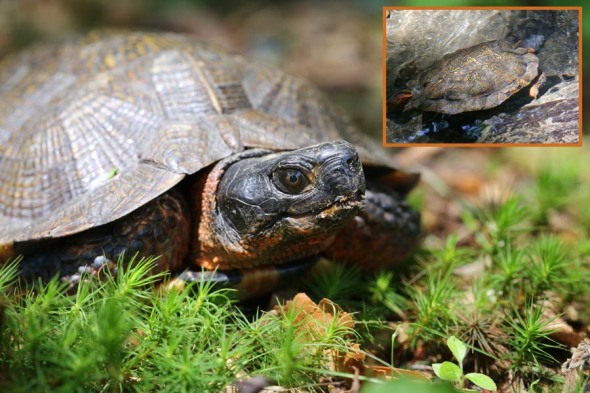 The Wood Turtle’s (Glyptemys insculpta) common name comes from the resemblance of each segment of its top shell, or carapace, to the cross-section of a tree complete with radiating growth rings. Unlike other turtles that favor either land or water, wood turtles reside in both aquatic and terrestrial habitats. They require streams and rivers for spring mating, feeding and winter hibernation, but also require terrestrial habitats for summer egg-laying and foraging. In slow moving streams and rivers (see photo insert) they feed on fish and insects. On land, usually within 300 yards of a stream, they forage for snails, slugs, berries and mushrooms. Wood Turtles are known for stomping their feet on the ground in order to presumably mimic the vibrations of rain. Earthworms then come to the surface, and the turtle snaps them up.

Congratulations on correctly identifying the trails as being made by turtles! Even though you did not have the benefit of knowing their width, many of you took a stab at the naming the species of turtle that made them. Hats off to Jason, who correctly identified them as wood turtle trails, especially as it is relatively early in the season for them to be laying eggs.

Two female wood turtles (so-called because of the resemblance of their top shell, or carapace, to wood), were on their way out of a shallow wetland to dig into soft sand about 6” deep and lay their (4 – 18, usually 8 or 9) eggs. The size of the footprints, tail drag and 7-inch flattened shell path help to identify these trails as those of wood turtles. Although you can follow the tracks and see exactly where the trails end, it would be hard to detect that excavation and egg-laying has taken place at these sites, as the holes have been filled in and smoothed over with the turtles’ bottom shells, or plastrons. Predators with a good sense of smell, such as foxes, raccoons and skunks, however, have very little trouble locating turtle nests. Research shows that 85% of wood turtle eggs and hatchlings are lost to predation. The wood turtle population is in decline in the northeast in part due to human development which not only decreases wood turtle habitat and increases the number of people collecting these turtles, but also increases the number of predators. (The wood turtle in the photograph has just laid her eggs and smoothed over the nest site in front of her head by walking backwards over it while pressing her plastron to the ground.)

Wood Turtles (named for the woody appearance of their shells) are primarily river and stream-dwelling reptiles. They forage for food on land near streams, where, at this time of year, they also lay their eggs. Like most turtles, female Wood Turtles seek out sandy soil in which they dig several holes (to confuse predators) and choose one in which they usually lay seven or eight eggs. Their diet consists of both plants and animals, with berries and mushrooms at the top of the list. Earthworms are also a favorite, and their method of attracting them is a sight I would like to see — they stamp their front feet alternately in order to get earthworms to surface from their underground burrows. The Wood Turtle population in New England is in decline (collecting has greatly reduced their population) and any sighting of this species should be reported to state Fish & Game as well as, in Vermont, the Vermont Reptile and Amphibian Atlas.