Birds have a number of ways of keeping cool, which is a good thing,  given the number of hot days we’ve experienced this summer, and probably for summers to come.  They don’t sweat, nor do they pant, but birds do have several  behavioral adaptations which reduce their temperature.  Often, while exposed to the relentless heat of the sun, Great Blue Heron nestlings resort to what is called gular fluttering.  They open their mouths and “flutter” their  neck muscles, promoting heat loss – an avian version of panting.   An even easier behavior to observe is the position Great Blue Herons will often assume on a hot day.  They droop their wings (see photograph) while standing, which allows air to circulate across their body and sweep away the excess heat. 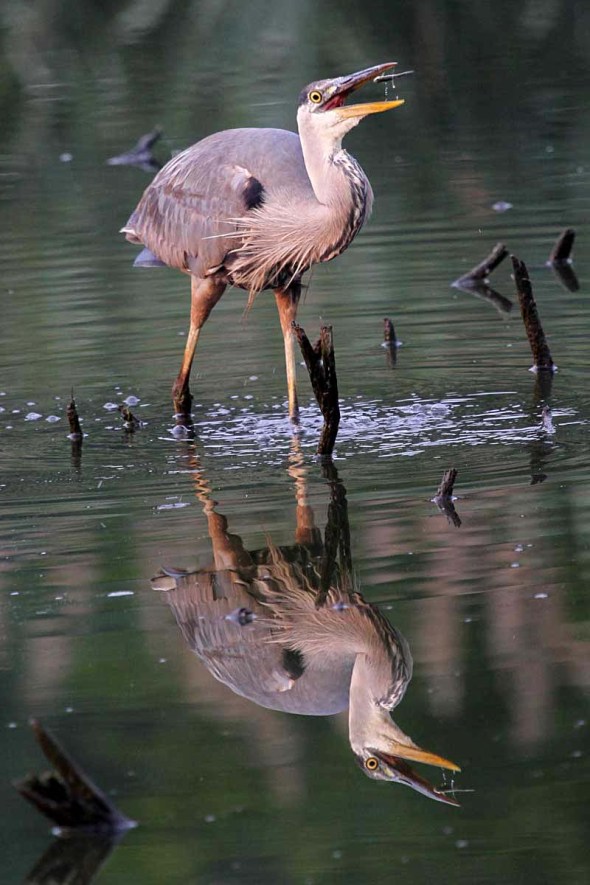 Although Great Blue Herons are colonial nesters, they forage by themselves, usually by slowly wading or standing in wait of prey in shallow water.  Fish are the mainstay of their diet, but they also consume amphibians, invertebrates, reptiles, mammals, and birds.  When prey is located (by sight), the heron rapidly thrusts its neck forward and grabs it with its beak.  If it is small, it is sometimes tossed in the air before it is swallowed, as the photograph depicts.  Most prey are swallowed whole.

Great Blue Herons are returning to their breeding grounds in northern New England, where they typically nest in colonies.  Unlike the nests of songbirds, heron nests are re-used year after year.  While an individual heron does not usually choose the same nest every year, they usually return to the same colony.  While some colonies are active for only a few years, some have been known to be active for over 70 years.  Because nests can be located up to 100 feet high in a tree (typically a dead snag in the Northeast), you rarely have a bird’s eye view of nesting activity.  However, if you go to Cornell’s new live great blue heron web cam site (http://www.allaboutbirds.org/page.aspx?pid=2433 ) you can see every movement made by the great blue herons currently nesting in Sapsucker Woods in Ithaca, NY.

After many minutes of standing stock still, eyes fixed on the water beneath him, the great blue heron slowly stretched his neck forward, paused and then suddenly thrust his beak into the water.  If you look very closely, you’ll see that he came up with more than a mouthful of aquatic vegetation.