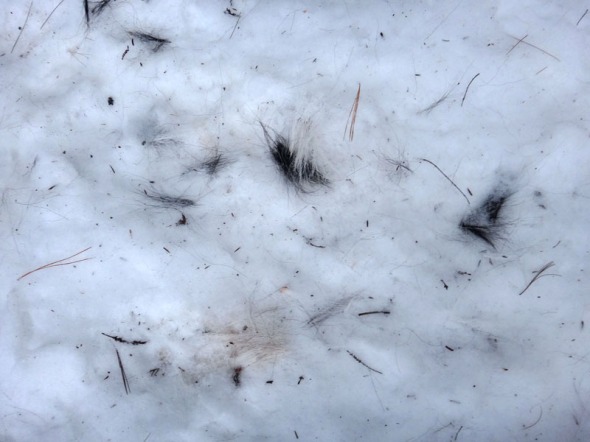 At first glance, this looks like any other kill site, but if you look closely at the hairs, you’ll see that it was a striped skunk that was preyed upon – a rare find, for two reasons. One is that striped skunks spend most of the winter holed up and only amble out during warm spells (which we had recently). Their mating season is also about to begin. The second reason that this find is unusual is that skunks have very few predators, for obvious reasons. Great horned owls and occasionally a coyote, fox or bobcat will risk being sprayed. In this case, tracks were not evident by the time it was discovered. Initially the lack of anything other than hair suggested that the predator was a mammal which carried off the skunk (great horned owls usually eat at the kill site). However, it turns out that the absence of bones, etc. doesn’t actually rule out an owl. According to the Cornell Lab of Ornithology, occasionally when a great horned owl kills more prey than it can eat, it caches the remains for later use. When in need of food, the owl will incubate frozen prey until it thaws and can be eaten. (Discovery and photo by David Putnam.)

Hardy birds that they are, Great Horned Owls are one of the earliest nesting birds — you can find them on nests in January, February and March, even in northern New England. Eggs are incubated for about a month, typically in March or April with young usually hatching in May or June. The nestlings remain in the nest for six or seven weeks before fledging. Unable to fly until they’re ten or twelve weeks old, the fledglings follow their parents around and continue to be fed and cared for by them until the fall. These two fledglings were sticking close together as they made their raspy begging calls from high in a white pine. Both their calls and the down that was visible on their heads told me that they were this year’s young.

Although you would think that no predator would think of preying on, much less eating, a striped skunk, there are a few mammals, including coyotes, foxes and bobcats, that do just that, but only if they are in danger of starving.  One predator that routinely dines on skunks is the great horned owl.  One summer night I made out the silhouette of an owl flying in my direction, and as it flew by me its identity was confirmed by the skunk-like odor that accompanied it.