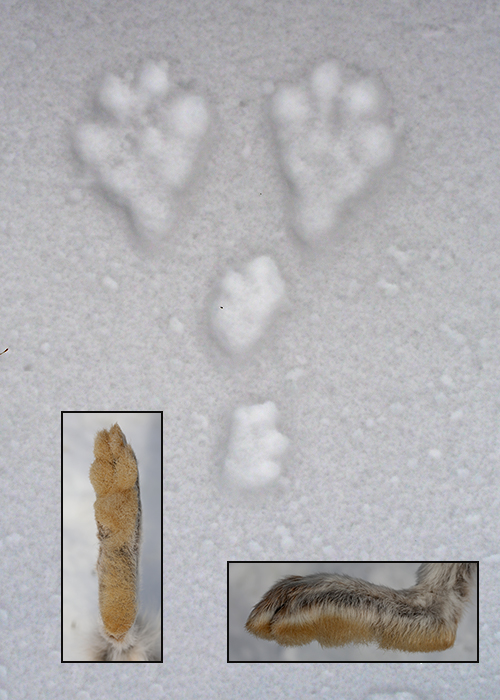 Snowshoe Hare tracks are readily discernible because of the paired larger hind feet which land in front of the smaller front feet when a hare bounds over the snow.  When bounding, a hare’s front feet usually land side by side, unless they are traveling at great speed, when one front foot tends to land in front of the other (see photo).

Because they have hairy feet and no exposed toe pads, Snowshoe Hares usually do not leave distinct toe impressions in their tracks.  When they do, you will see four impressions, even though they have five toes on each foot.  In soft snow, the four long toes of each foot are spread widely, increasing the size of these “snowshoes” still more. The fine, sharp claws on their feet may or may not register.

Snowshoe Hares have up to four litters a summer (females mate within 24 hours of giving birth).  Their litters range from two to nine young (leverets), with larger litters the further north you go. Unlike cottontails, the Snowshoe Hare gives birth to precocious young – their eyes open shortly after birth, they have a dense coat of fur, and they are able to weakly move about within 30 minutes.

The female leaves the nest once she’s through giving birth, and returns once a day to nurse her young.  By the fourth day, the young hares scatter from the nest.  They reassemble at the same time each evening and their mother appears and nurses them for five to ten minutes.  She then leaves and the young disperse. This behavior continues for about a month, until the young are fully weaned.  (Thanks to Virginia Barlow and Wendell for photo op.)

It is not hard to see why the individual toe pads in the tracks of a snowshoe hare’s feet are rarely very distinct. There is a 3/4”- thick layer of hair on the bottom of a hare’s 5- to 6-inch-long hind foot. This hair, along with the size of the foot and the ability of the hare to spread its toes to a width of five inches allows the hare to stay on or near the surface of the snow, and, in the right snow conditions, outrun heavier predators.

In northern New England we have hare “runs” rather than rabbit runs, but they serve the same purpose. They are well-maintained escape routes, and the snowshoe hare’s life depends on the hare’s knowing every twist and turn they take.

During the summer, hares keep their runs free of branches by pruning them back. In the winter, hares also have to prune as the snow gets higher and the runs encounter more branches. They also spend a lot of time and energy packing down the snow on these runways so they will have a clear, hard surface on which, if it’s necessary, they can make their escape. This runway construction is done by hopping up and down, progressing slowly, inch by inch. It looks like many hares have passed by, but it’s usually done by one individual and runs through its territory. Snowshoe hares are nocturnal, but during long or heavy snowstorms, they will come out and pack their run during the day. 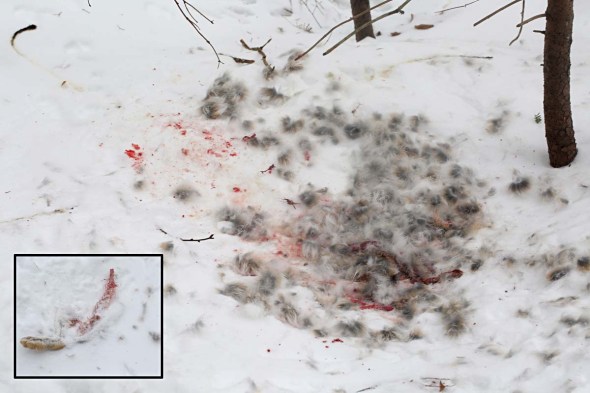 The drama that goes on in our woodlands is never-ending, and winter provides us with a window into life and death scenarios. One of the most sought-after prey animals in northern New England is the snowshoe hare. Bobcats, lynxes, coyotes, foxes and fishers are some of the mammalian predators of this lagomorph. In this particular case, however, the predator had wings (determined by wing imprints in the snow and lack of tracks). While great horned owls do prey on hares, there was a tell-tale sign that it was a hawk, not an owl, which produced this pile of fur and bones. If you look to the upper left of the photograph, and to the upper right, you will see lengthy curved lines of bird droppings, or sprays, that were left by the predator as it plucked its prey. Because it was ejected forcibly, and didn’t just drop down on the snow where the bird was situated, the scat leads one to the conclusion that it was a hawk, not an owl, which deposited it. A woodland accipiter capable of capturing a snowshoe hare after an extensive chase, which this was, is the northern goshawk. (Thanks to Nicole Cormen for photo op.)

You’re most likely to see Snowshoe Hares at dawn or dusk, when they are most active. That is, if you can detect them before they detect you. Snowshoe Hares depend upon camouflage as their first line of defense, with seasonal coats to match their environment. They sometimes freeze where they are, making no movement, or take shelter in a protected spot or “form” and sit quietly, with their feet tucked out of sight and their ears pressed tightly against their back, making them all but invisible. If threatened, they can break into a full run leaping up to 12 feet at a time, reaching 30 or more miles per hour thanks to their powerful hind legs. (Photo by Patsy Fortney)

Bobcats and Canada Lynx are in the same genus, and are roughly the same size (averaging 15 to 35 pounds), with Bobcats usually weighing a bit more than Lynx. The size of their feet is vastly different, however, and not proportional to their relative weights. A Lynx has much larger feet and longer legs than a Bobcat. Its range extends further north, which means it must be well equipped to deal with snow much of the year. A Lynx has big, furry paws, and when its feet land the toes spread way out. Both of these adaptations help a Lynx’s feet act like snowshoes, helping it to chase down food in the winter. Much of the time, this food consists of Snowshoe Hares –anywhere from 60 to 90 percent of the diet of Lynx is made up of hares. The soles of Snowshoe Hare feet are also well-furred, particularly in winter, enabling them to run on soft, deep snow without sinking in very far. Because Snowshoe Hares are extremely fast and agile (reaching speeds of 30 mph and jumping 12 feet in a single bound), the feet of any serious predator must also be well adapted to traveling on snow.

Note: Bobcat sightings are much more frequent than Lynx in northern New England (the southern tip of the Lynx’s range) but breeding populations of Lynx have been documented in the last two years in the boreal forests of Maine, New Hampshire and Vermont. 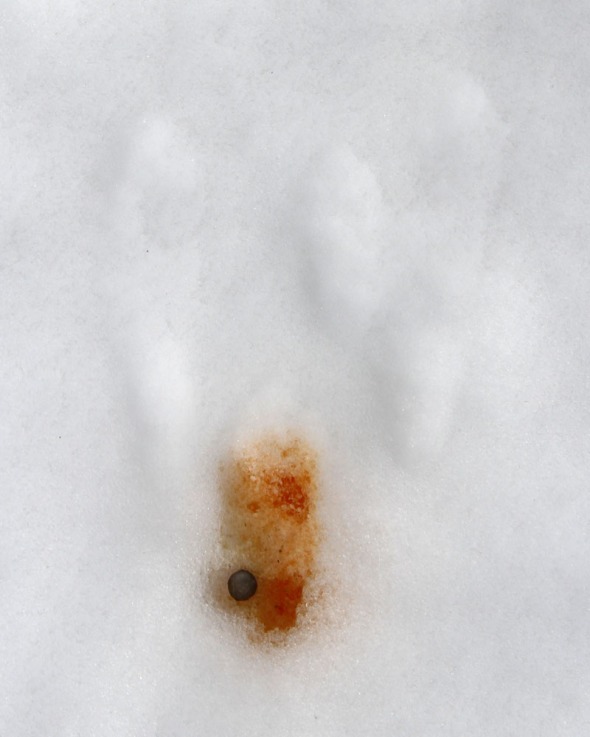 Snowshoe hare scat is very distinctive – round, brown, pea-size fibrous pellets. Equally, if not more, distinct is their urine, which sometimes is orange, red or pinkish, depending on their diet. Often mistaken for blood, snowshoe hare urine has this color because of chemical compounds called porphyrins which are present in the chlorophyll molecules of green plants that hares consume. These compounds have such vibrant pigments that they were originally extracted from plants and used as dye for clothing. If you’re interested in seeing this colorful phenomenon, now is the time to do so, for it’s obviously a lot easier to find when there is snow on the ground!

If you ever think you work hard for the food you eat, try tracking a fisher!  I would estimate that I followed a fisher’s tracks for at least three miles today and other than stopping to mark its territory once, and investigate a log or two, there was not a sign of its finding a thing to eat.  Fishers travel widely in search of prey — one was recorded travelling 56 miles in three days.  The fisher I followed traveled through prime snowshoe hare (their most common prey item) habitat, as well as areas where porcupines have been known to den.  A fisher’s food requirements are about one snowshoe hare per week, a squirrel or two per week, or 2 – 22 mice per day.  A porcupine will feed a fisher for a month or so. (Note snowshoe hare tracks on bottom left of photograph, and fisher tracks running diagonally across the image, where the fisher left its mark.) 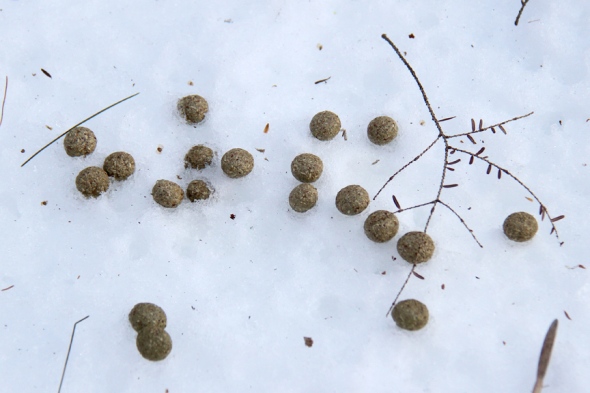 Rabbits and hares generally deposit their scat pellets one at a time, so when you find several in one spot, you know they’ve been there a while, either eating or resting.  The little round, brown, fibrous rabbit and hare pellets we are familiar with have actually been ingested twice – a process referred to as coprophagy.  On its first passage through the digestive system, bacteria act on the food in the large caecum (a pouch near the start of the large intestine, which most herbivorous mammals possess) reducing it to a more easily digestible form and concentrating it, particularly its vitamin B and protein content.The caecum, however, is past the portion of the digestive tract in which most resorption takes place.  It is therefore necessary for the animal to reingest the resulting pellets, which are soft and green and covered with mucous, to extract as much of the nutrition as possible.  These soft pellets are eaten directly from the anus. Coprophagy increases protein digestibility from 50 percent in one pass through the digestive system to 75 to 80 percent upon reingestion. Cellulose digestion is increased from 14 percent in one pass through the digestive system to two or three times that amount when the feces is re-ingested.