Most tussock moths, such as this Hickory Tussock Moth (Lophocampa caryae), are densely covered with hair-like structures called setae that bear microscopic barbs.  Many people are sensitive to these setae and get an itchy rash if they handle a Hickory Tussock Moth.   Even touching the cocoon of a tussock moth can cause irritation, as the setae are woven into it.  Many tussock moths display warning coloration with their black, white, red, orange or yellow setae.  What looks like two Hickory Tussock Moth larvae in the photograph is actually one adult caterpillar (left) and its shed skin (right).   You can find these larvae feeding on hickory, walnut, ash, oak and many other trees in the woods right now.  After spending the winter pupating in a cocoon in the leaf litter, a small spotted, tan moth emerges. 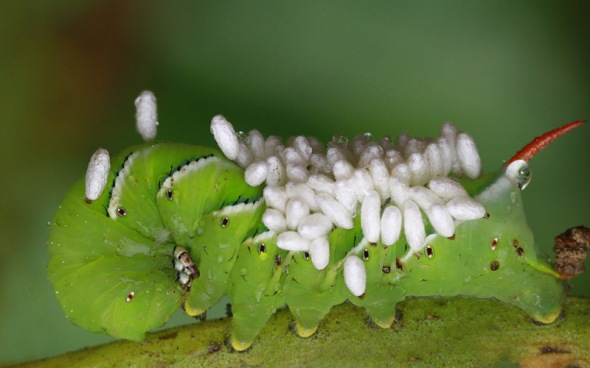 Tobacco Hornworms, Manduca sexta (often found feeding on tomato plants and confused with Tomato Hornworms, Manduca quinquemaculata) are often the target of a species of Brachonid wasp that parasitizes beetle, moth, fly and sawfly larvae. The adult wasp lays her eggs inside the hornworm with her long ovipositor. The eggs hatch and the wasp larvae feed on the caterpillar. Eventually the wasp larvae emerge and form white pupa cases on the skin of the dying hornworm larva, inside of which they transform into winged adults. Braconid wasps are extremely good at locating hornworms, even when there are very few to find. Because they parasitize hornworm, cabbage worm, aphid and gypsy moth larvae, Braconid wasps are considered important biological control agents. If you want to discourage Tobacco Hornworms in your tomato patch, allow the wasps to complete their metamorphosis – this accomplishes both the demise of the hornworm, as well as an increased population of Braconid wasps.

Of the multitude of discoveries that every summer offers us, one of the most magical is that of  a Monarch Butterfly chrysalis.  While locating a Monarch larva is not all that difficult, especially when they are as prolific as they are this summer, finding a chrysalis doesn’t happen all that often. Most butterfly chrysalises are a rather drab brown, but the Monarch’s is a beautiful green which serves to camouflage it in fields where the caterpillars feed on milkweed and eventually pupate (form a chrysalis).  The Monarch caterpillar, when mature, usually seeks a sheltered spot under a leaf or branch where rain will not cause the silk button by which it hangs to disintegrate.  The chrysalis in the photograph is attached to a blade of grass which was anchored with silk to another blade of grass in order to make it more secure.  No matter how many I’ve seen, each one still takes my breath away.

Ants go through complete metamorphosis, passing through four stages (egg, larva, pupa, adult). Like honeybees, there are queens, female workers and male drones in an ant colony. The female worker ants have a series of “jobs” that they perform in a certain order. A young worker spends the first few days of its life caring for the queen and young. After that she maintains the nest and eventually forages for food. Like most insects, ants lack grasping forelegs and compensate for this by using their mandibles as “hands.” When the nest is disturbed, workers rush to rescue the eggs, larvae (depicted in photograph) and pupae by clasping them in their mandibles and transporting them to safety. They also use their mandibles to carry food, construct nests, and for defense.

If you’ve never heard of a Spongilla Fly, you’re not alone. We don’t see its larval stage, as it lives under water, where it feeds exclusively on fresh water sponges. You can find these sponges living in the still waters of large rivers, lakes and wetlands. The beautiful silken net, as well as the small cocoon inside the net, are created by a Spongilla Fly larva after it crawls out of the water and chooses a spot on land on which to pupate (in this case on a seat cushion). The entire structure is less than ¼” in diameter. 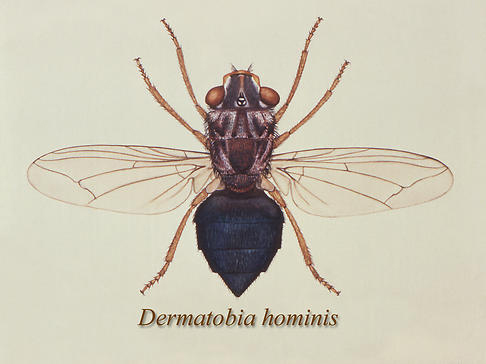 Congratulations on some very creative guesses!  Yesterday’s post  was a botfly puparium – a hard case made from an insect’s larval exoskeleton (skin) that covers and protects the pupa.  Most insects that go through complete metamorphosis (egg, larva, pupa, adult) don’t have this added protection for their pupal stage, but certain flies, including botflies, do.  Botflies are fairly large, hairy flies that resemble bumblebees and are internal parasites of many species of mammals, including humans. Depending on the species, the botfly deposits its eggs on or near the host animal, or on another insect, such as a mosquitoe or housefly, which carries them to their host. The eggs of some species of botflies are ingested or inhaled; those of other species hatch and the larvae bore into their host. After entering and crawling around inside of the host animal for a week or so, most species of botfly larvae settle in a spot just under the host’s skin and remain there for three to ten weeks, consuming the flesh of its host.  The lump, or “warble,” that forms just under the host’s skin where the botfly resides increases in size as the larva grows. A tiny hole chewed in the skin allows the larva to breathe, and eventually it exits through this hole.  The larva falls to the ground, where it pupates in the soil and later emerges as an adult botfly. (The two yellow bumps at one end of the puparium are spiracles, through which the pupa breathes.) The whole story of this particular puparium is that Jeannie Killam  found it in her old farmhouse’s kitchen cupboard, where it probably popped out of a visiting mouse.  (Illustration is of a human botfly.)

It appears that this may be a good year for monarchs in the Northeast, as with very little looking, you can find their eggs as well as young monarch caterpillars. Look on the underside of the top leaf or two on young milkweed plants – these leaves are tender and monarchs often lay their tiny, ribbed eggs there (usually one per plant) as they (leaves) are ideal food for young larvae. The first meal a monarch larva eats is its egg shell. It then moves on to nearby milkweed leaf hairs, and then the leaf itself. Often the first holes it chews are U-shaped, which are thought to help prevent sticky sap (which can glue a monarch caterpillar’s mandibles shut) from pouring into the section of leaf being eaten.