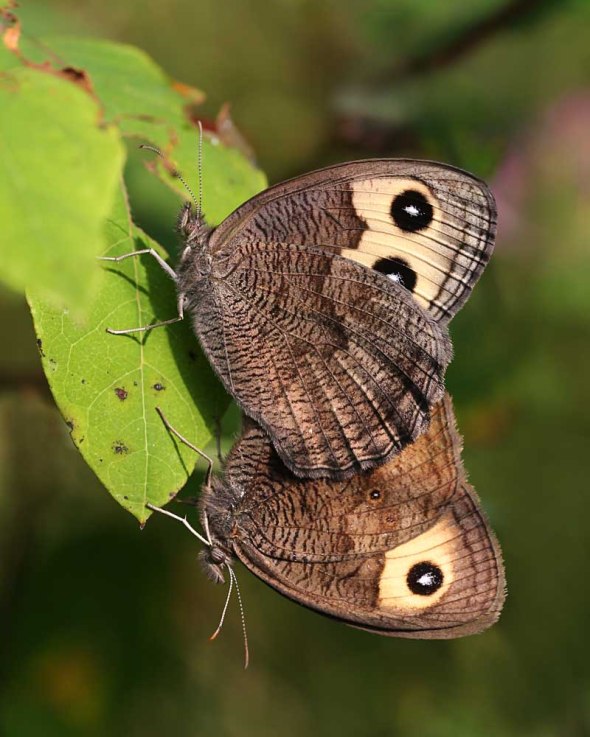 If you’ve walked in a shrubby meadow lately, you are probably well aware that Common Wood Nymphs (Cercyonis pegala) are everywhere. Each step seems to flush one, which, after some erratic flying, settles back down beneath the grasses, hidden from view. These butterflies are in a group called “satyrs” which consists of mainly medium-sized, brown butterflies. They belong to the Nymphalidae family, also known as brush-footed butterflies, or four-footed butterflies. The reason for these common family names is immediately apparent when examining a Common Wood Nymph (or Monarch, Painted Lady, fritillaries or checkerspots). Butterflies in this family look as though they only have four feet. Being insects, however, they have six. The front two legs are folded up in front of its head, and are extremely small and bristly. These reduced legs are present in all brush-footed butterflies, and are not used for walking or clinging. Rather, the bristles on these legs are sensory organs, used for detecting smells and for tasting. The butterfly’s proboscis is coiled up between this front pair of legs. 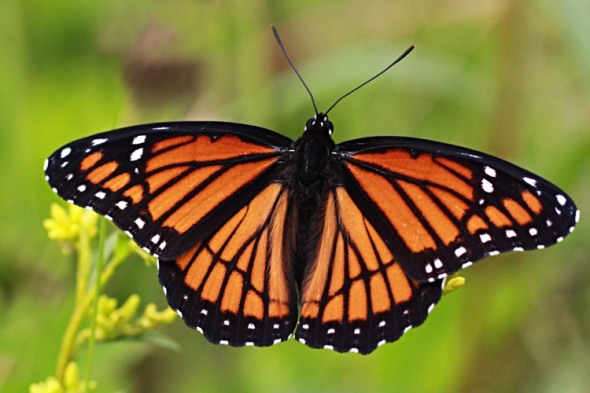 The Viceroy Butterfly closely resembles the Monarch Butterfly, but is smaller, and has a black line that runs across the veins of its back wings, which the Monarch lacks. While Viceroys don’t contain the poisonous cardiac glycosides that Monarchs do, they do contain salicylic acid due to fact that the larvae feed on willows. This acid not only causes the Viceroy to taste bad, but makes whatever eats it sick. So not only do these two butterflies look alike, but they discourage predators in the same way. This is not a coincidence. The fact that they are both toxic if eaten and are preyed upon by some of the same predators has led to their similar appearance. This phenomenon is referred to as Müllerian mimicry, and essentially it means if two insects resemble each other, they both benefit from each other’s defense mechanism — should a predator eat one insect with a certain coloration and find it inedible, it will learn to avoid catching any insects with similar coloration.