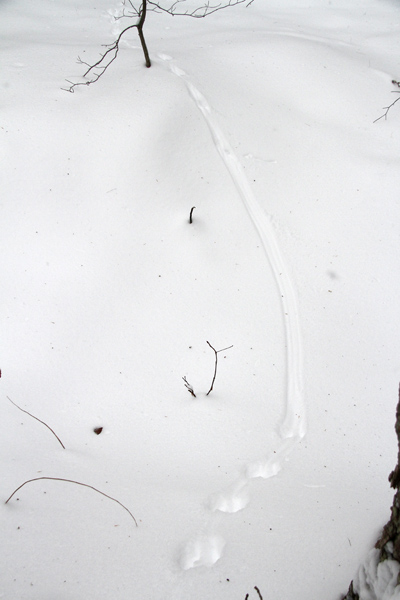 There is nothing like heading out on snowshoes to look for tracks after a major snow storm has passed. The pristine snow is often untouched, except for a few brave souls who have ventured out. Most of the mammals that are active in winter hunker down until well after it has stopped snowing, but the mink (Mustela vison) is not about to lose a night of hunting and its tracks can often be found the morning following a storm. Like other weasels, this bounding carnivore often leaves diagonally paired tracks, but unlike other weasels, its tracks are consistently the same distance (1 to 3 feet) apart. They also are most prevalent in or near wetlands. Although a fierce predator, the mink also has a playful side, much like its cousin, the river otter. Mink are known to dive under the snow and make short tunnels. Even more delightful to come upon are the slides that mink often make down inclines. If you see a groove in the snow about 3” in diameter, with paired tracks at either end, you have come upon such a slide.

Like their cousins the otters, mink will slide down snowy inclines on their bellies, as the slide in this photograph illustrates. They are excellent swimmers and can swim underwater to a depth of 18 feet or for a distance of 100 yards.  Look for tracks and slides along streams, in cattail marshes and in swamps, where they forage for crayfish, frogs, fish, small mammals and invertebrates. One of its largest prey is the muskrat.  A male mink (larger and stronger than a female mink) captures one by wrapping its body around the muskrat and then biting its neck. Mink make the most of their meals, recycling what they can – the winter nest of one mink consisted almost entirely of the fur of muskrats.