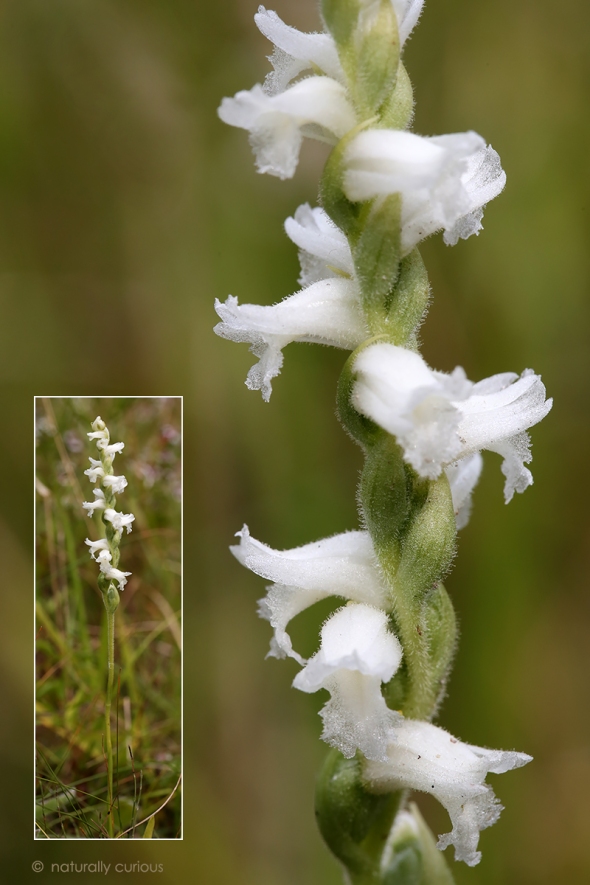 Nodding Ladies’ Tresses (Spiranthes cernua) are flowering in wetlands throughout New England. This diminutive orchid is described to perfection by Minnesotawildflowers.info as a “spiraling stalk of closely clustered, crystally translucent white flowers thrusting their twisting trumpets out at right angles to the stalk.” The downward “nodding” curve of its tubular flowers and the vague resemblance of the flower stalk to a braid may account for its common name. The flower stalk is anywhere from four to twelve inches high and the lightly fragrant delicate flowers, like those of most orchids, are resupinate. That is, they twist during their development into an upside-down position. 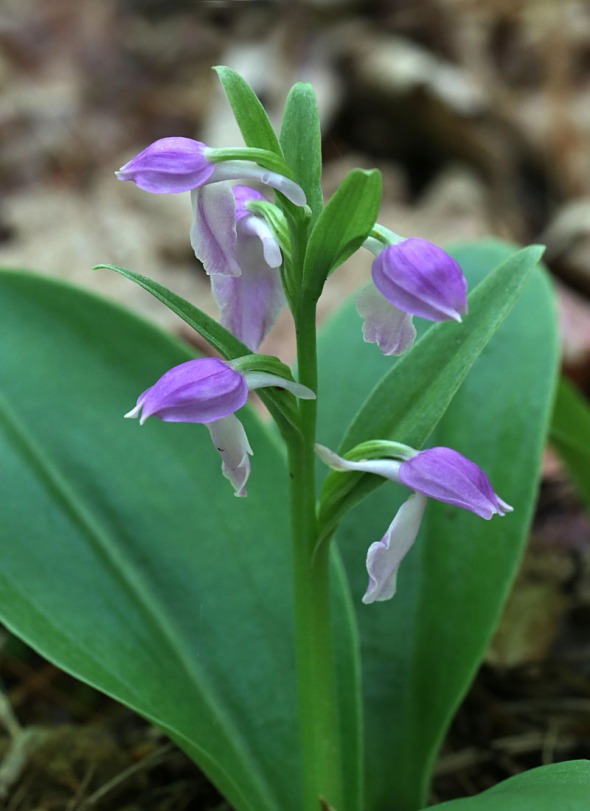 A walk in deciduous woodlands at this time of year could result in the sighting of several species of orchids, one of which, Showy Orchis (Galearis spectabili), has a stalk of several flowers which typically bear lavender hoods (one variant is white). Potential pollinators, most of which are long-tongued bumblebees, butterflies, moths and bees, land on a white petal below the hood which acts as a “landing pad.” The insect next heads for the tip of the nectar-filled spur located at the back of the flower. In getting there it brushes against, and often picks up, packets of pollen (pollinia) before moving on to the next blossom, where cross-pollination ideally takes place. (Thanks to Ginny Barlow for photo op.) 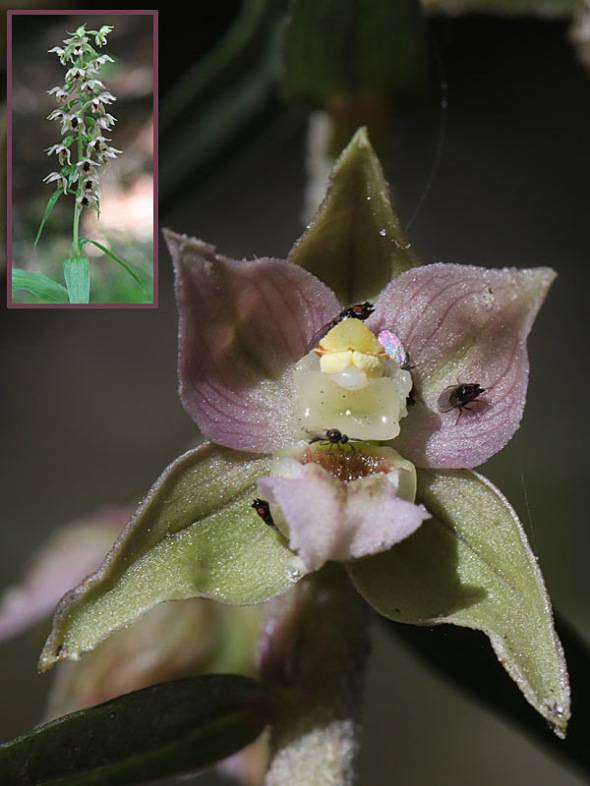 Helleborine (Epipactis helleborine) is a common woodland plant which is easily overlooked due to its inconspicuous, small, greenish-purple flowers. However, this modest member of the Orchid family brings pollination to a new level. Its structure is said to not be morphologically attractive to insects, so Helleborine has come up with another strategy to get its flowers pollinated. It produces nectar that contains several chemicals, including oxycodone, a drug which has a morphine-like effect on organisms that ingest it. When insects drink the oxycodone-laced nectar, they become sluggish, which prolongs the amount of time they spend at the flower, which, in turn, increases the chances that the flower will be pollinated. 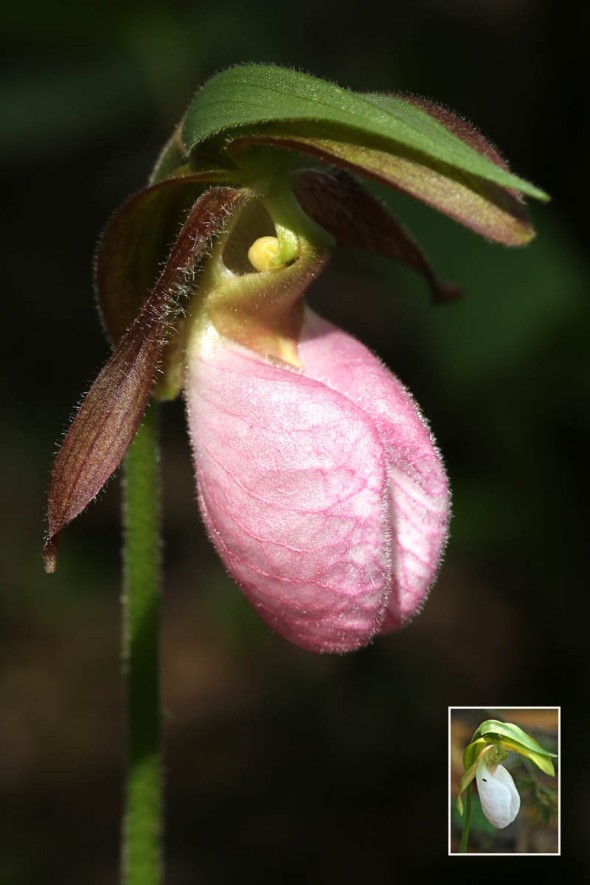 Pink Lady’s Slippers (Cypripedium acaule), also known as Moccasin Flowers, differ from Yellow and Showy Lady’s Slippers in two fairly obvious ways. One is that the stalk the single flower is borne on bears no leaves. In addition, the pouch, or labellum, has a vertical slit running the length of it, rather than an oval opening on the top. Bumblebees are the only insect strong enough to push their way through this slit and are their main pollinators. In New England, almost 25% of the Pink Lady’s Slipper population have white flowers (see insert). 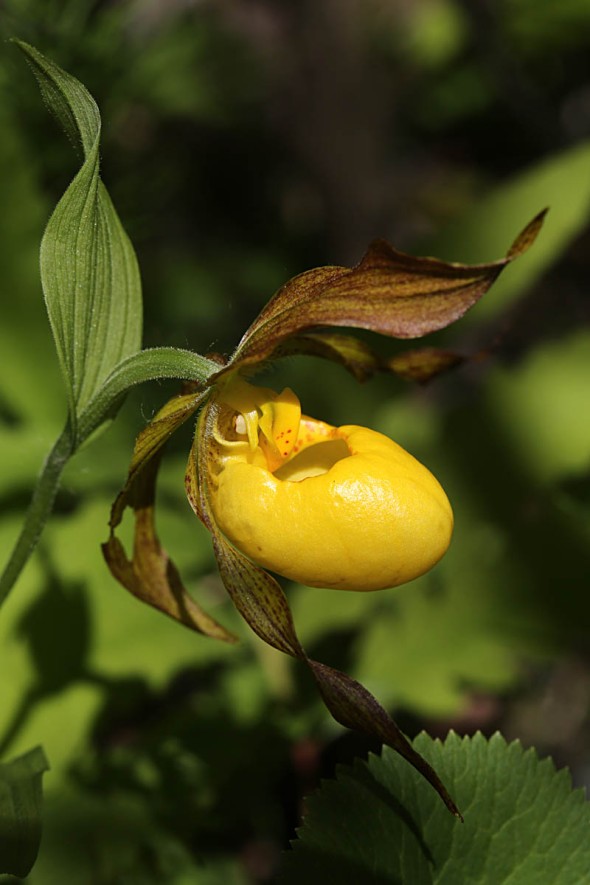 There are only about three short weeks in the late spring when the blossoms of Yellow Lady’s Slippers grace our woodlands and wetlands. The production of an orchid is a complicated process. If pollination and fertilization are successful, hundreds of thousands of some of the smallest seeds of any flowers are scattered by the wind. The seeds of Yellow Lady’s Slippers (and other orchids), unlike those of most flowering plants, contain no food for the seedling plant. In addition, the coating surrounding the seed is extremely tough, so much so that the seed can’t germinate until Rhizoctonia fungi digest the outer coating, which allows the inner seed to access soil nutrients. This can take two years or more and then it may take another few years for the plant to produce a flower. 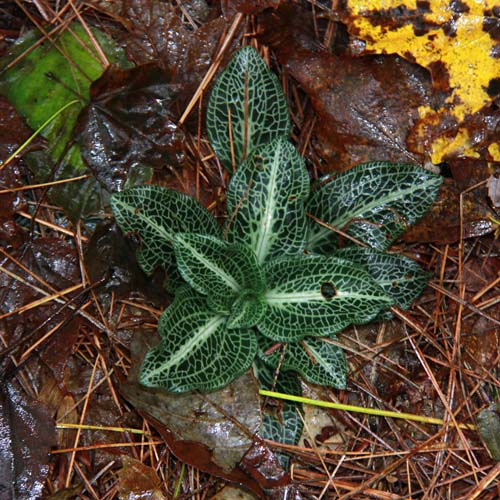 If you look at the forest floor in coniferous woods you may well discover Downy Rattlesnake-Plantain (Goodyera pubescens ).  This evergreen rosette of broad, rounded leaves gets its name from the similarity of the shape of its leaves to those of plantain, a common lawn weed.  In fact, it is an orchid, not a plantain, and is the most common species of plantain in New England. It is distinguished from other species of rattlesnake-plantains by the bright silver markings on the leaves and the broad stripe down the center of the leaves.  Each leaf lasts for approximately four years.