It’s that time of year again, when grasshoppers are courting, mating and laying eggs that will overwinter and hatch next spring. In addition to adopting different poses and flashing brightly-colored wings, male grasshoppers attract females by producing calling songs. (Some females also produce sounds, but they are usually infrequent and very soft.) The males rub their hind femur against a forewing, or rub a forewing against a hind wing in order to make their calls, a process called stridulation. Tympana, or eardrum-like structures on their abdomen, allow both male and female grasshoppers to hear. Because the songs are species-specific, females can readily identify males of the same species.

After pairing up, the smaller male grasshopper usually mounts the female and the female curls her abdomen up to reach the male’s reproductive organ (aedeagus) from which she receives a package of sperm called a spermatophore. The mating process can take from 45 minutes to more than a day, depending on the species. The small, pointed structures that you see at the tip of the female’s abdomen are her ovipositors, with which she deposits her eggs in the ground. 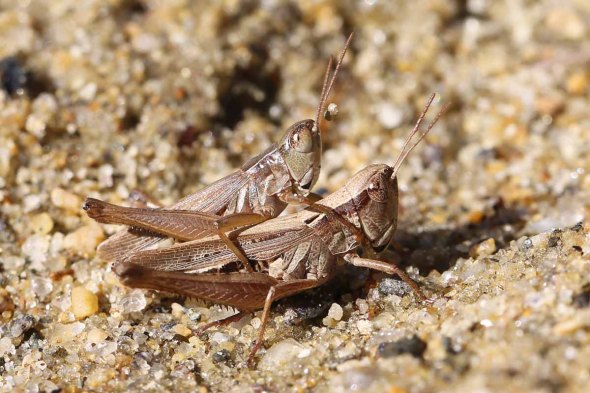 Grasshoppers typically mate in late summer and fall. If it’s a short-horned grasshopper (pictured), the smaller male mounts the female (female long-horned grasshoppers mount the males). The male short-horned grasshopper often remains riding the female for long periods in order to ensure paternity. When the eggs are fully formed, the female pushes the ovipositor at the end of her abdomen ½” to 2” into the ground and produces a glue-like secretion that cements the soil around the egg mass, forming a protective “pod.” Each pod may contain 25 to 150 eggs, depending on the species of grasshopper. Grasshoppers which deposit masses containing few eggs usually lay more pods to compensate. A female may lay as many as 300 eggs which overwinter and hatch in the spring. 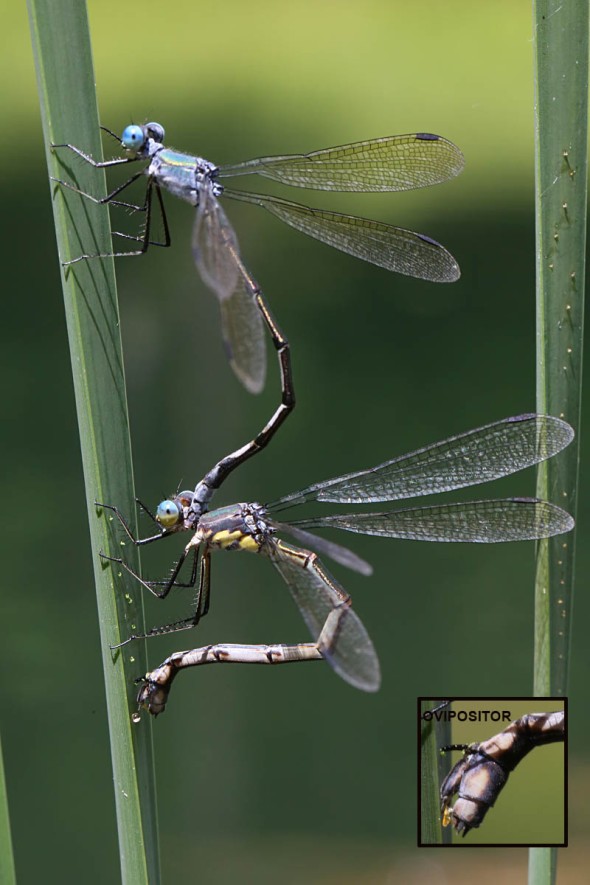 The two damselflies in this photograph have mated, but the male is still clasping the back of the female’s head so as to guard her and prevent her from receiving the sperm of another male before she is through laying eggs. Damselflies lay their eggs both in the water as well as in plants. The pictured female (bottom damselfly) is in the act of using her ovipositor (thin black structure at tip of abdomen) to puncture a cattail leaf and insert her 1 mm- long egg into the plant tissue. If you look closely, you will see holes in the leaf blade above the hole she’s currently making, where she has previously laid eggs. Thousands of these holes may be drilled and eggs inserted into them during her brief life.

This impressive egg-laden, 2-inch long female Broad-necked Root Borer (Prionus laticollis) was attempting to lay her eggs when I discovered her. She repeatedly extended and retracted her ovipositor (pointed, egg-laying structure at tip of abdomen) in an attempt to probe the packed dirt in my driveway, but finally moved on to softer soil. Female Broad-necked Root Borers insert clumps of eggs into the ground. When the eggs hatch, the larvae tunnel downward to feed on the roots of a variety of shrubs and trees. In the spring they pupate, and adults, such as this female, emerge. This whole life cycle is thought to take three years.