Marsh Marigold’s (Caltha palustris) common name is partially accurate – it does grow in marshes, but it is not closely related to marigolds.  It is also known as Cowslip, a name which is also misleading, as it doesn’t refer to cows losing their footing when walking on this plant.  According to The Secrets of Wildflowers by Jack Sanders, the word literally means “cow slop,” or cow dung, as both the English cowslip, for which it was named, as well as cow paddies were found in the same pastures. People used to believe that butter derived its yellow coloring from the Cowslip flowers that cows ate. In fact, like many other plants in the Buttercup family, it contains irritants that cause most grazers, including cows, to avoid the plant.  Humans do eat the young leaves, but boil them several times to rid them of acrid irritants that could be poisonous.

Wintergreen (Gaultheria procumbens), also known as Checkerberry and Eastern Teaberry, is an aromatic, evergreen plant that creeps along the ground. Its single, white flowers develop into bright red berries which deer and grouse consume with relish. Not surprisingly, these berries taste like oil of wintergreen. The active ingredient in this oil is synthesized and used as a flavoring in chewing gum, toothpaste, breath fresheners, candy, and medicines, including Pepto Bismol. This same ingredient, methyl salicate, is related to aspirin, which explains why Native Americans chewed and made a tea from the leaves and berries of winterberry to alleviate pain. 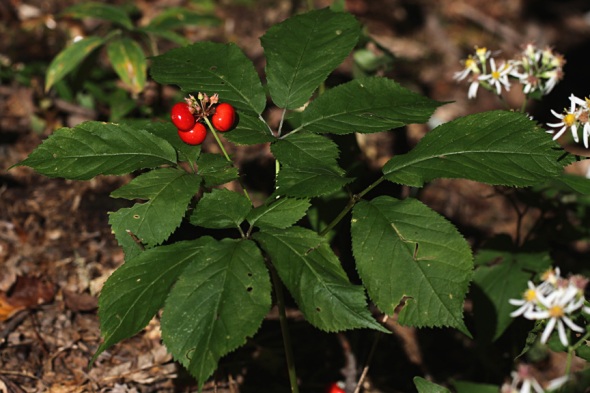 American ginseng (Panax quinquefolius), is a perennial plant in the Aralia / Ivy family, commonly used in Chinese and herbal medicine.  It is found in hardwood forests in New England, but due to over-harvesting, is quite rare (Daniel Boone and Davy Crockett are said to have made large sums of money in ginseng trafficking).  It has a light tan, gnarled root that often looks like a human body with stringy shoots for arms and legs. If a plant looked like a part of the human body, it used to be assumed that it could cure that part.  Because ginseng’s root resembles  the entire human body, it was used to treat just about any ailment.  American ginseng was used traditionally by Native Americans as a stimulant and to treat headaches, fever, indigestion, and infertility.  Today it is associated with alternative treatment for diabetes, cancer, colds and flu, ADHD, immune system enhancement and sexual impotency.

In late summer, before the thrushes, veeries and warbling vireos consume them all, the scarlet fruits of bunchberry (Cornus canadensis) adorn the floor of moist, coniferous woods. Although edible, either raw or cooked, these berries lack a distinctive flavor.  Even so,  Native Americans used them in puddings and sauces.  A dwarf version of flowering dogwood, bunchberry grows in colonies that develop from an underground stem, or rhizome. 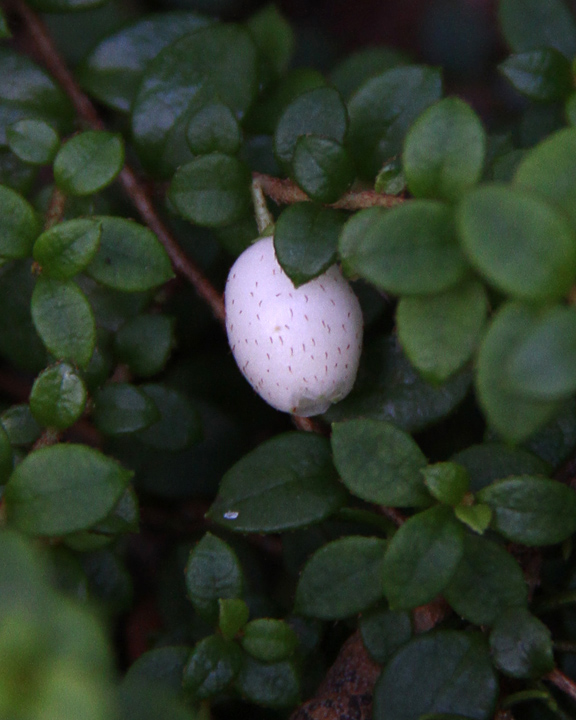 Creeping snowberry’s name says it all.  This perennial plant can be found growing in acidic soil, creeping along the forest floor, sometimes forming an expansive carpet of greenery.  Tucked amongst its tiny leaves this time of year are snow-white berries which developed from greenish-white flowers.  Both the leaves and the berries smell mildly like wintergreen. Creeping snowberry belongs in the Heath family, along with blueberries, huckleberries and cranberries.  In fact, other than the bristles on the underside of its leaves, the leaves of creeping snowberry could easily be mistaken for small cranberry.  The fruit is actually edible (it also tastes a bit like winterberry), but you will have to compete with deer, hares, grouse, robins and bears for it.

Rattlesnake plantains get their name from their rosette of broad, egg-shaped leaves, which are similar in shape to those of plantain, a common lawn weed. Although they are called plantains, they are actually orchids.  There are four species of rattlesnake plantains in New England, and the differences between them are subtle.  The pictured checkered rattlesnake plantain (Goodyera tesselata) has leaves with soft green markings, whereas the other three species have silver-white central stripes and/or markings.  Sometimes the species hybridize, making identification challenging.

Red baneberry, Actaea rubra, can be found growing in moist, shady woodlands, or even roadsides, where it is often not noticed until its red berries have formed in mid-summer.  Although the berries are poisonous to humans, they are not to birds, which are the primary disperser of baneberry seeds.  In addition to robins, brown thrashers, catbirds, sapsuckers and grouse, small mammals such as chipmunks, voles, squirrels and nice eat the fruit.  Several species of birds that consume baneberry eat the fruit but void the seeds, while some of the small mammals remove and eat the seeds leaving  the pulp.  You may be familiar with a common relative, white baneberry, which produces white berries that are referred to as “doll’s eyes.” Native Americans used the juice from the fruits of various baneberry species to poison their arrows.