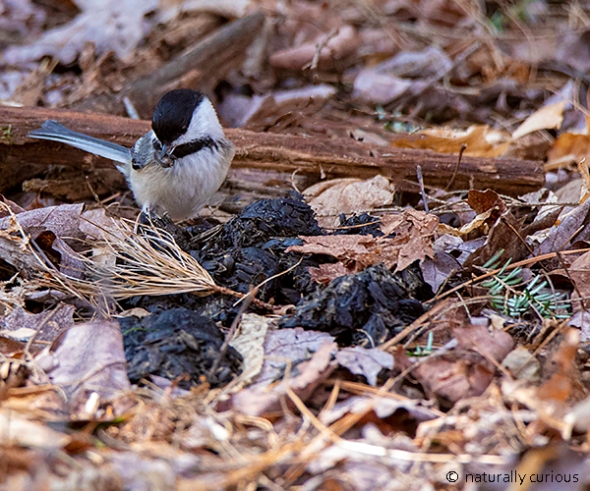 Recycling is the process of converting waste materials into new materials and objects.  In the natural world, agents such as fungi and bacteria that turn dead plant and animal matter into air, water and nutrients come to mind.  If you broaden the definition of recycling to include the re-use of material, however, many more organisms come into play.

Some humans continue to feed birds in the spring after Black Bears have emerged from their dens.  The bears have not eaten for four or five months and once their digestive system adjusts, they are extremely hungry.  Available bird feeders are often raided by hungry bears at this time of year, and end up discarded on the forest floor with the seeds they contained ending up inside the bears’ stomachs.  Eventually the bears defecate and their feces contain little else but the husks of sunflower seeds interspersed with intact seeds.  Keen-eyed Black-capped Chickadees are very quick to take advantage of these recycled sources of protein.  (Check the Chickadee’s beak closely.)

The ability to find food is crucial for all creatures.  It involves looking in every potential location, including the waste material of other animals.  Nothing goes to waste in the natural world, and I was fortunate to observe an example of this recycling phenomenon recently in bear-inhabited woodlands.

Even though feeding birds is discouraged at this time of year due to the seeds’ appeal to hungry, emerging Black Bears, many find it a hard habit to stop. Inevitably Black Bears will smell the seeds in feeders and help themselves to them.  If this continues long enough, the bears will become habituated and eventually this can lead to their being considered a nuisance, which can lead to their demise. Thus, it’s best to stop feeding birds now that Black Bears have emerged from hibernation.

That said, those who continue to fill feeders in the spring and have had them raided by bears need not fear that their birds are without recourse should they find the feeders empty or missing. Much of what goes in comes out, and bears deposit their seed-laden scat throughout the woods, creating ground “feeders” for all kinds of creatures. In this instance, a Black-capped Chickadee repeatedly helped itself to uncracked sunflower seeds amongst a great deal of millet and sunflower seed husks in the scat of a Black Bear.

This post is dedicated to Sadie Brown, Solid Waste & Recycling Coordinator for the town of Melrose, MA. 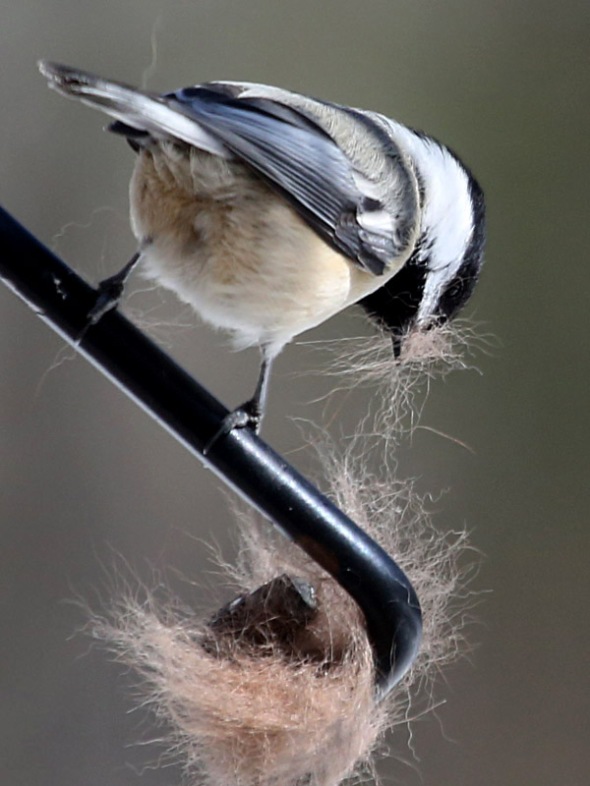 At least two to four weeks before one would expect to find a black-capped chickadee building a nest, one was busily collecting hairs shed by my chocolate lab yesterday. In addition to fur, chickadees line their nest with grass (not available yet here), down and moss (hard to come by with two feet of snow still on the ground). Chickadees are able to nest this early in part because they nest in cavities, which offer them protection from the elements. Not having bills strong enough to hammer out cavities in living trees, chickadees rely heavily on rotting stumps for nest sites — the wood in them is punky and easy to remove. Birch, poplar and sugar maple snags and stumps are preferred nesting trees. If you want to provide chickadees and other birds with nesting material, take advantage of the fact that dogs and cats are shedding now, and recycle their fur.

Bird Feeding – Does It Foster Dependency?

Decades ago birds remaining in the Northeast in the winter almost exclusively survived on weed seeds and insects they gleaned from crevices in tree bark. Today, nearly one-third of American adults provide about a billion pounds of bird seed each year, to say nothing of suet, seed cakes, etc. Should we be worried about creating a population of food-dependent wintering birds? Studies suggest that this is not the case. Researchers (this is going to sound cruel) removed feeders from woodlands where Black-capped Chickadees had been fed for the previous 25 years, and compared survival rates with those of chickadees in a nearby woodland where there had been no feeders. They documented that the chickadees familiar with feeders were able to switch back immediately to foraging for natural foods and survived the winter as well as chickadees that lived where no feeders had been placed. Not only did the feeder-fed birds not lose their ability to find food, but research also showed that food from feeders had made up only 21 percent of the birds’ daily energy requirement in the previous two years. This is not to say that there aren’t negative aspects to feeding birds, such as window collisions, disease, house cats, etc., but one thing luring birds to our houses for a closer look doesn’t do is destroy their innate ability to find food. (Photo is of a Red-breasted Nuthatch.) 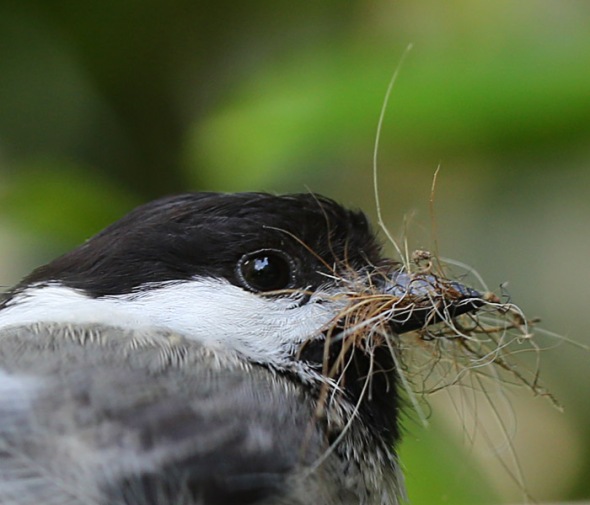 Black-capped Chickadees tend to be early nesters, often as early as April, as they build their nest inside a cavity where it is sheltered from the cold. Chickadees rarely re-use a nest, so one might guess that this Black-capped Chickadee with nesting material in its beak in early July has a second brood on its way. However, it is unusual for Black-capped Chickadees to have a second brood of young after the first has fledged. If they lose the first brood, they sometimes will re-nest, but it’s more likely that this chickadee is just a late nester, as nest-building can and does occur up until mid-July. Both members of a pair excavate a cavity in a rotting tree, stump or post and then the female alone builds the nest inside the cavity. The foundation of the nest is usually made of coarse material such as moss. The lining consists of softer, finer material such as deer hair, rabbit fur, or in this case, an aging chocolate Labrador Retriever’s hair.

Even though black-capped chickadees are named for their chick-a-dee-dee-dee winter song, it is their so-called spring song which resonates most with many of us. It seems as if chickadees are immediately aware of when the days start to get longer, as their mating song begins as early as January. Sounding to some like “fee-bee” and others as “hey-sweetie,” this delightful song consists of two whistles, each about half a second long, with the second whistle a lower pitch than the first. Although these cavity nesters won’t actually be breeding until April, we will continue to be serenaded by their courtship song throughout the winter. As birdsong expert Donald Kroodsma so aptly describes this song, “It is the purest of whistles, this promise of spring.”