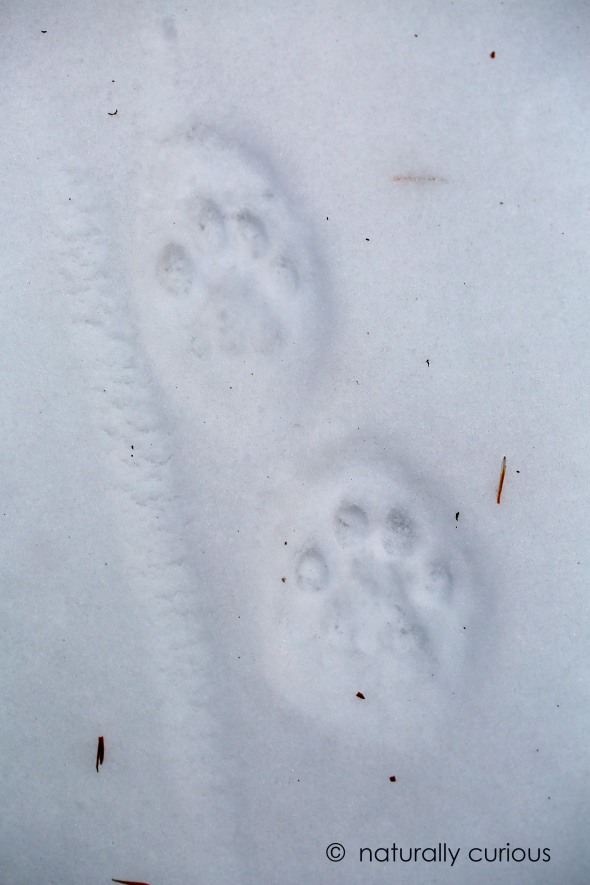 These feline tracks were found in central Vermont. The position of the four toes (front two not aligned side by side like canids), lack of nail marks, three lobes on hind edge of heel pad, and the overall shape of the tracks (more round than oval) confirm that they were made by a member of the cat family. The size of the tracks (2 ½” long, 2 1/4″ wide) falls right in between those of a Bobcat (1 ½” long, 1 3/8″ wide) and a Mt. Lion (3 ½” long, 4″ wide). The observer of the animal that left these tracks was confident that its overall shape, size, color and long tail were those of a young Mt. Lion.

There have been confirmed (DNA from scat, tracks) signs of these large cats in recent years in New England, as well as the body of a road-killed male Mt. Lion (Connecticut, 2011). DNA testing found that the animal was from South Dakota. Males seem to be moving into the Northeast, but a breeding population has yet to be established according to most biologists. 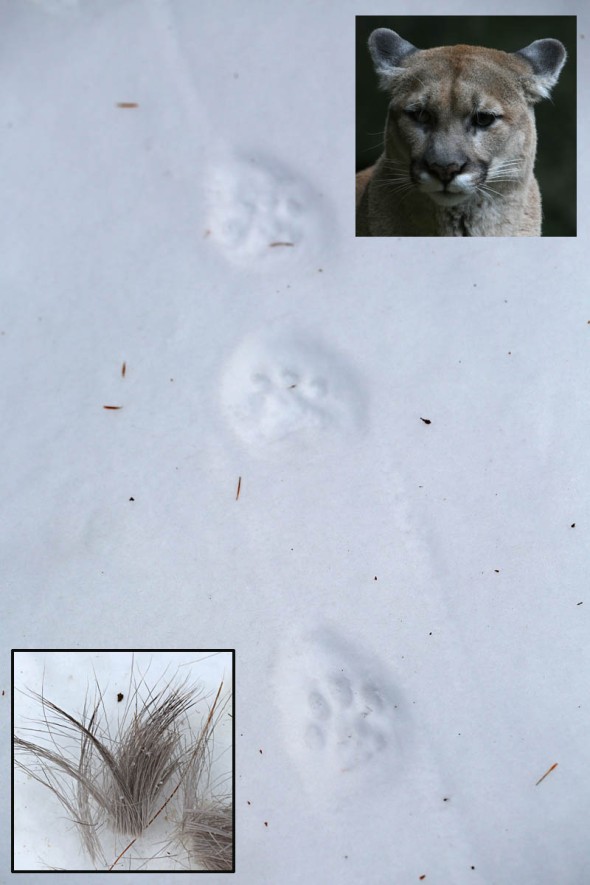 Are there cougars/mountain lions/pumas/panthers/catamounts (all common names for the same species) in the Northeast? There have been many sightings in every New England state, but official Class 1 confirmation (body, photographs or DNA) only in Connecticut (2011), Massachusetts (1997) and possibly Vermont (1994-mixed DNA results). It depends on whom you talk to, but the consensus of most wildlife biologists is that there may not be a breeding population yet, but they are here (some thought to be of captive origin). There is no question that cougars are extending their range eastward. Through DNA analysis a cougar killed by a car in Connecticut in 2011 proved to have come from the Black Hills of South Dakota. It had traveled about 2000 miles to the East Coast over 2-3 years.

A recent sighting by a friend had me out on snowshoes recently, trying to find traces in the woods where she had had an excellent view of what she identified as a juvenile cougar crossing the road in front of her car. The pictured tracks are what I found and followed. They are definitely cat tracks! Further investigation revealed several sites where parts of a deer had been cached, with typical (of a cat) sheared deer hair (see photo insert) evident. Unfortunately, there was no scat to be found, so adequate DNA wasn’t available for analysis, and thus, it is but one of 50 to 60 reported-but-unconfirmed cougar sightings that Vermont gets each year. It may be officially unconfirmed, but there is no question in my mind which species of cat I was tracking. (Thanks to Squam Lakes Natural Science Center for cougar photo op.)