Wood Frogs have emerged from their hibernacula and migrated to their ancestral woodland breeding pools, or vernal pools, to sing (males), mate and lay eggs (females). A chorus of duck-like quacking reveals where these hidden temporary bodies of water are located. The male Wood Frog in this photograph is on top of a female, grasping her behind her front legs in a hold referred to as “amplexus.” They will remain in this position until she lays her eggs and he then fertilizes them externally. Note that even though he has attracted a female and is in the process of mating with her, the male is continuing to sing (one of his two vocal pouches is inflated on the near side of his body). 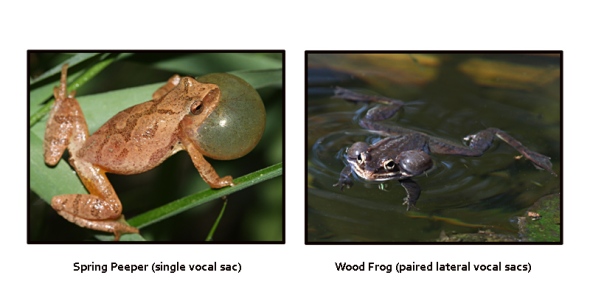 “Peeps” and “quacks” fill the air these days.  How is it that these frog calls travel so far?  It’s all thanks to a thin membrane , or sac, that most frogs have. Note the single inflated sac of the spring peeper, and the paired sacs on either side of the wood frog’s head. These vocal sacs act as resonating chambers, causing the male frog’s mating call to be amplified and carried far (some species of frogs can be heard over half a mile away). Most frogs have one of three basic types of vocal sacs: a single throat sac (the most common), paired throat sacs (partially separated by connective tissue) and paired lateral sacs (completely separate chambers on either side of the head). Vocal sacs are outpocketings of the floor of the frog’s mouth. When calling, a frog closes its mouth and nostrils, and expels air from its lungs through the larynx and into the vocal sacs. The vibrations of the larynx emit a sound which resonates within the vocal sacs. The frog continues calling as muscles within its body wall force the air back and forth between the lungs and vocal sac. The thickness of the vocal sac wall in frogs varies. Typically, small frogs that call in the air (spring peeper) have thin vocal sac walls, whereas those that call in the water, particularly large species (green and bull frogs) often have thick-walled vocal sacs that appear swollen, not inflated like a balloon, when filled with air.

After noticing the sudden loud clacking chorus at a nearby temporary woodland vernal pool, I went down to investigate, and there were dozens of wood frogs floating on the surface, as they croaked their duck-like quacks in the hopes of attracting female wood frogs.  As far as I could determine, they were out of luck on this, their first day at the breeding pool, as I don’t believe the females have arrived yet.  One clue was the relatively small size of the floating frogs and it seemed as though every frog was calling (only males call).  Plus, time after time a wood frog would swim up to another wood frog and attempt to grasp it only to have the object of its desire utter a “release” chirp (a call made only when a male clasps another male) and swim rapidly away.