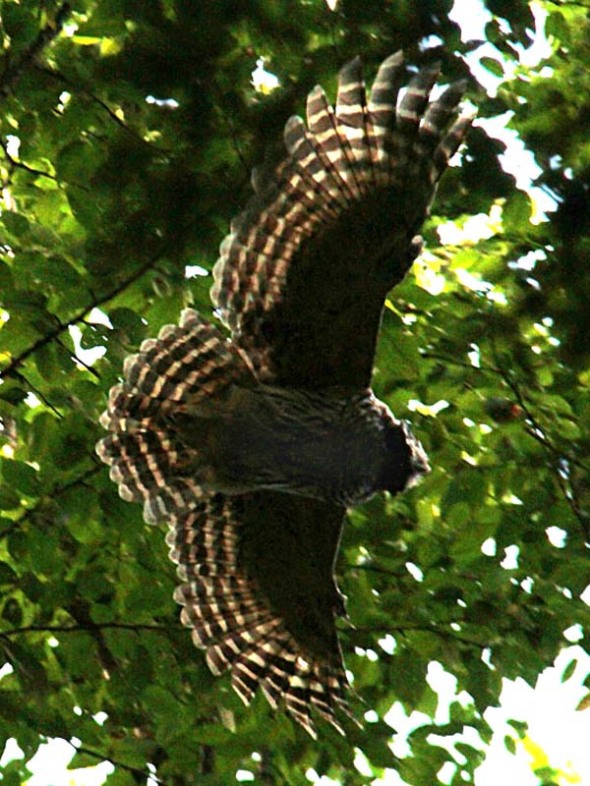 This is pure conjecture, but here goes. Barred Owls are known to consume small mammals, birds, reptiles, amphibians, fish and invertebrates. I have repeatedly encountered a Barred Owl lately near a pool of water in a brook that has all but dried up. Fish have become trapped in this pool due to the dryness of the summer, and are easy pickings for predators. Even though studies have shown that fish are a very small percentage of a Barred Owl’s diet (2.5% in owls from New Jersey, New York and Connecticut during the breeding season), I am betting that the owl that I flushed yesterday that was perched right next to the isolated pool in the brook was spending the day (and night?) at his favorite fishing hole. Three times it took off from its perch as I approached, but only flew a few feet away each time. Perhaps fish or frogs kept it from disappearing further into the woods. 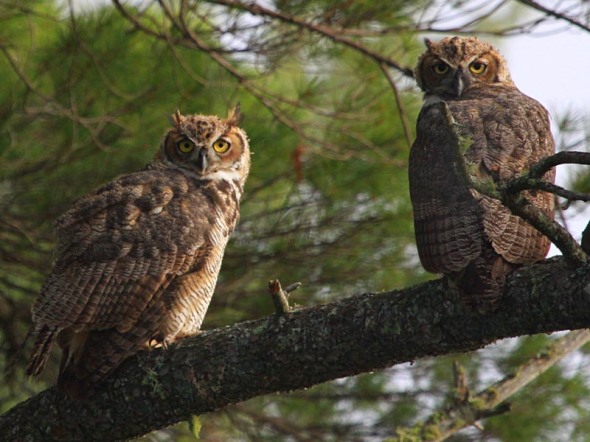 Hardy birds that they are, Great Horned Owls are one of the earliest nesting birds — you can find them on nests in January, February and March, even in northern New England. Eggs are incubated for about a month, typically in March or April with young usually hatching in May or June. The nestlings remain in the nest for six or seven weeks before fledging. Unable to fly until they’re ten or twelve weeks old, the fledglings follow their parents around and continue to be fed and cared for by them until the fall. These two fledglings were sticking close together as they made their raspy begging calls from high in a white pine. Both their calls and the down that was visible on their heads told me that they were this year’s young. 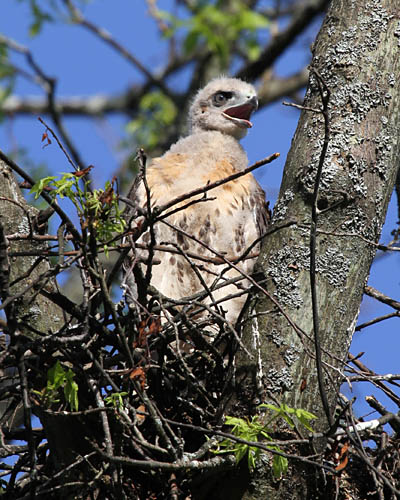 The Red-tailed Hawk nest that produced two fledglings last year is in use again this spring.  In the past month the nestlings have gone from tiny white powder puffs to nearly equaling their parents in size.  Down is still visible, especially on their heads, but contour feathers are quickly replacing them on other parts of their body. Soon there will be wing stretches and flapping, as well as hopping about on nearby branches in preparation for fledging.

Although you would think that no predator would think of preying on, much less eating, a striped skunk, there are a few mammals, including coyotes, foxes and bobcats, that do just that, but only if they are in danger of starving.  One predator that routinely dines on skunks is the great horned owl.  One summer night I made out the silhouette of an owl flying in my direction, and as it flew by me its identity was confirmed by the skunk-like odor that accompanied it.

The American Kestrel, formerly known as the Sparrow Hawk, is about the size of a Mourning Dove, making it the smallest falcon in North America.  It typically perches on tall trees, or telephone lines and poles, surveying surrounding fields in hopes of finding insects or small mammals to eat.  This female American Kestrel (her wings are rusty colored, males’ are slate-blue) flew down to the ground, captured an insect and returned to its telephone pole perch where it consumed its meal.  If you look closely at the perched kestrel, you’ll see a notch in its upper bill.  Many falcons have this notch which is thought to be an adaptation for severing the spinal column of vertebrate prey. 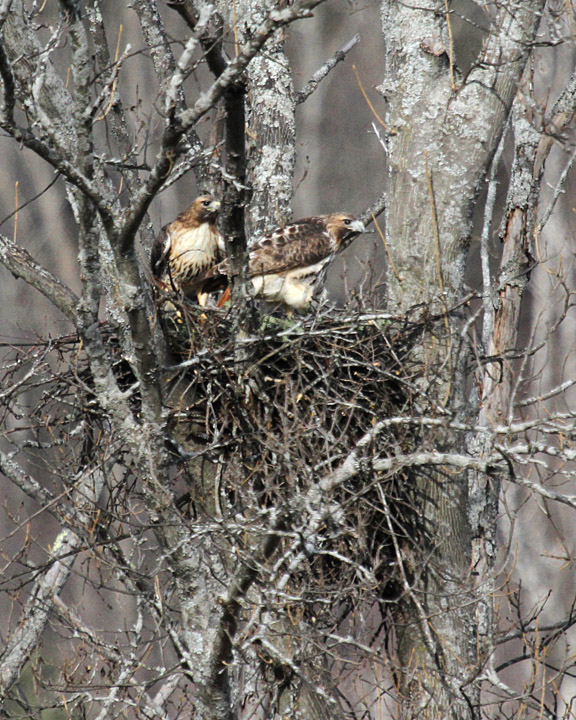 The red-tailed hawk nest that produced two chicks last summer is once again occupied by a pair of red-tails.  A conifer sprig adorning the outside of the nest was the first clue that a second brood might be in the works.  Yesterday I saw both male and female return to the nest carrying strips of bark, which the female applied to the lining of the nest.  Mid-March is when red-tails typically are building or refurbishing their nest and laying eggs.  They begin incubating as soon as the first (of 2 – 3) egg is laid, with the male and female both participating.  This photograph was taken at the changing of the guard. 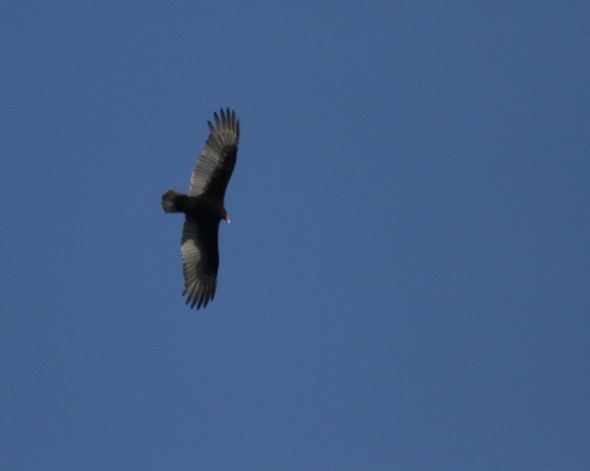 Right on time, the second week of March, Turkey Vultures are back in central VT/NH. Recognizing them is not too hard – they’re bigger than any other raptor in New England except for eagles.  At a distance Turkey Vultures look all black, but a closer look reveals that the undersides of the flight feathers, along the trailing edge and wing tips, are lighter in color than the rest of the bird, giving the wing a two-toned appearance. (Black Vulture wings are solid black with silvery tips.)  The feathers at the wing tips are often separated, which some birders refer to as ‘fingers.’   In addition, vultures hold their wings slightly raised, forming a ‘V’ or dihedral shape in the sky when viewed head-on.   Turkey Vultures soar in circles as they ride the thermals, using their sense of smell to locate tasty carcasses on the ground.

One night this week I became aware of a series of whistled “toots,” all the same pitch, coming from the adjacent woods. This far-reaching, distinctive call comes from a surprisingly small owl, the Northern Saw-whet — one of our most common owls, whose common name comes from the “skiew” call that is made when it is alarmed. This sound has a resemblance to the whetting of a saw. Although a Saw-whet only weighs about as much as a robin, you would never know it from the volume and carrying power (over 300 yards) of its call. Typically the male calls only during the mating season, in an attempt to attract a female with whom it will mate. The female then selects the nesting cavity, typically a Northern Flicker or Pileated Woodpecker hole, usually in March or April. This pint-sized raptor (weighing less than 3 ounces, and measuring 8 inches in length) feeds mainly on deer mice. Unlike most owls, it does not swallow the mouse whole, but rather tears it in half, leaving the second half for another meal. 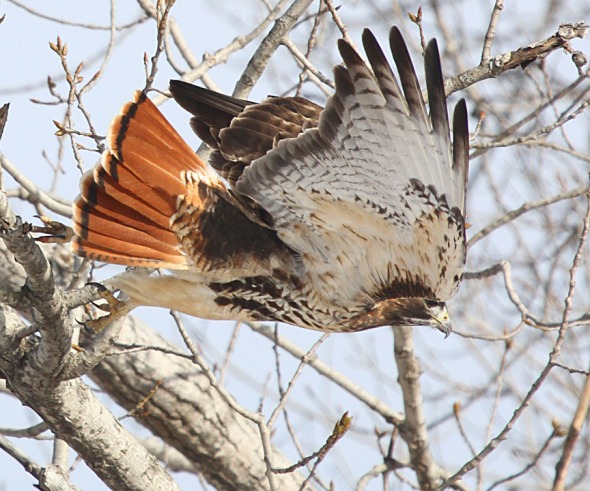 Given the right lighting, it’s very easy to see how red-tailed hawks (Buteo jamaicensis) got their common name (although the tail of juvenile red-tailed hawks is brown for their first two years).  Central Vermont and New Hampshire is at the northern end of the red-tailed hawk’s year-round range – if they live much further north, they usually migrate south for the winter.  This common bird of prey typically inhabits open areas interspersed with trees.   It is usually observed soaring in wide circles over a field, or perched high in a tree, where it sits and waits, keeping an eye out for prey such as mice, voles, rabbits and hares.  Once it spots a small mammal, as the red-tail in this photograph just had, it quickly takes off and uses its talons to capture its next meal. 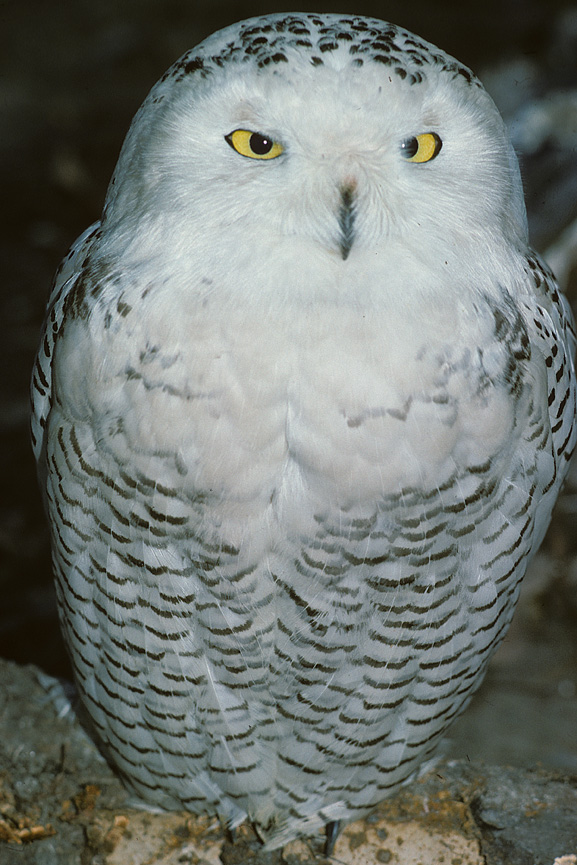 Your chances of seeing a snowy owl are better this winter than they’ve perhaps ever been.  We are in the middle of an irruption (the migration of large numbers of birds to areas where they aren’t typically found) of snowy owls.  There are several reasons for irruptions, the most common being a lack of food in the birds’ normal wintering grounds.  When there is a seed crop failure (birch, maple, pine, spruce and hemlock) further north, we often are inundated in the winter with seed-eating songbirds that typically overwinter in Canada, including waxwings, redpolls and grosbeaks, among others.  Birds of prey typically irrupt at this time as well, for when the seed crop fails, the (seed-eating) population of rodents also crashes, driving rodent-eating raptors further south to find food.  Snowy owls dine primarily on small rodents called lemmings, so one would expect from the current irruption that the Canadian lemming population must have crashed.  However, the opposite appears to be true this winter.  Arctic researchers report that this year lemmings were at historical population highs allowing for a very successful breeding season for Arctic raptors, including snowy owls. The resulting population boom caused overcrowding and competition at typical wintering grounds, resulting in our current banner snowy owl winter.

Imagine my surprise when a juvenile red-tailed hawk standing in a nearby field allowed me to approach ever so slowly within inches of it. Tracks in the snow told the story of its diving from the sky and successfully killing and eating a resident vole.  For unknown reasons, it remained near the kill site for at least an hour, offering me an unusual photographic opportunity. Its wings and legs were functioning just fine as it walked and hopped/rowed with its wings occasionally in six inches of snow, so it did not appear injured in any way. Having watched red-tails raising two young  this summer only a couple of miles away, I wondered if this juvenile was one of those fluffy, white nestlings that successfully fledged.

After several weeks of flapping their wings and hopping from their nest to nearby branches, the two bald eagle nestlings I’ve been keeping an eye on fledged.  Although I didn’t witness this, it is a common practice for the parents to “encourage” nest departure by flying around the nest with a prey item in their talons, vocalizing when their young are hungry.  However this particular fledging took place, it was successful, as one young eagle was in a non-nest tree when I arrived, and the other was perched on a branch near the nest.  When a parent landed on a nearby limb, the juvenile hopped up to it, spread its wings and took off, flying in a circle and landing in yet another tree nearby.  This wasn’t necessarily its first flight, for fledglings typically continue to use their nest as feeding platform, as well as nearby branches, for several weeks as they gain flight and foraging skills.  Young eagles usually follow their parents after fledging, and may be fed by them for up to six weeks after leaving their nest.