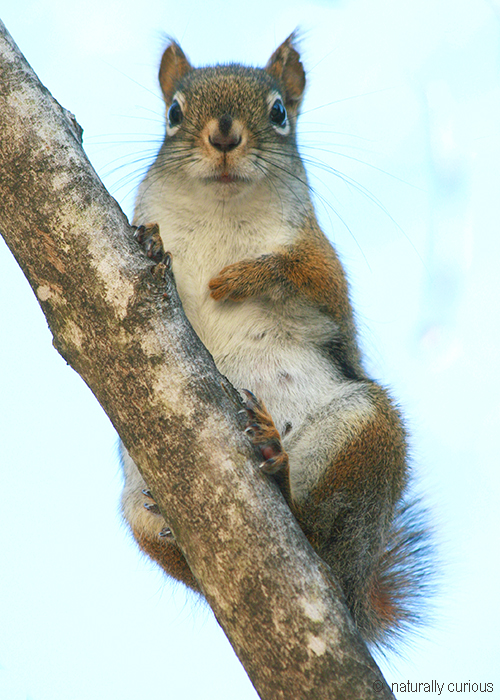 Congratulations to Mary Pratt, the first reader to correctly identify the impression a Red Squirrel left in the snow.  Red Squirrels are fiercely territorial, and will chase each other furiously in order to defend their territory and their food caches. The photographer, Susan Bull Riley, witnessed this behavior as she watched two Red Squirrels racing after each other in the crown of a maple tree.  Suddenly one of them fell to the ground, where sleet and wet snow cushioned its fall and recorded the belly flop landing.  No time was lost in the resumption of the chase!

There were many “Flying Squirrel” responses, which makes great sense as they are approximately the same size as a Red Squirrel (just an inch or two shorter in length) and are gliding from tree to tree or from tree to the ground.  My assumption is that a Flying Squirrel’s landing impression might show some of the patagium, or membrane, that stretches from a squirrel’s wrists to its ankles, due to the fact that it is extended as the squirrel glides. (Any firsthand Flying Squirrel landing-in-snow impression observations welcome.) Thanks to all who submitted an answer to this Mystery Photo.  Many were very amusing! 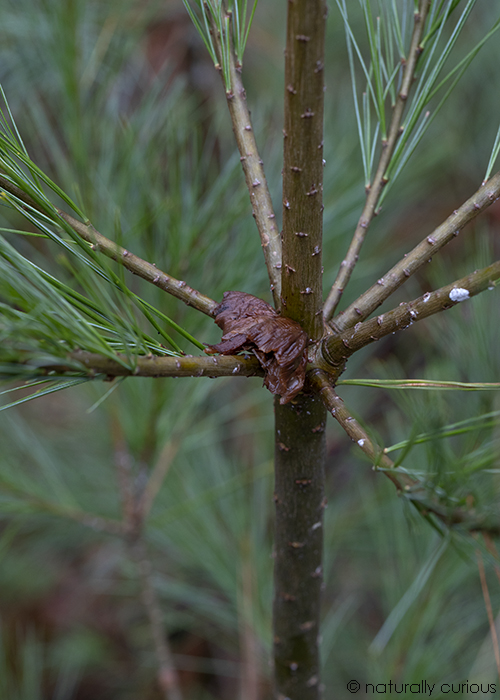 Both carnivores and herbivores cache, or store, food for later consumption. Black-capped Chickadees tuck seeds into bark crevices. Bobcats may cover their kills with leaves, grass, snow and even hair from their prey’s carcass. Grey Squirrels bury their nuts individually, while Red Squirrels often hide green cones in a pile of cone scales (middens) that accumulate at the site where the squirrels have previously eaten seeds, keeping the young cones moist so that they will retain the seeds within them.

Red Squirrels sometimes go one step further than most animals that cache food — they frequently preserve their food by drying it before storing it.  You’ll recognize this when you see it – an apple or mushroom stuck in the crotch of two branches. Sometimes the dried food is collected and cached near their winter quarters, but often it remains lodged in tree branches until eaten.  The pictured mushroom, which was hung out to dry, was reduced almost to mush by the torrential rains we’ve had lately. Eventually it will dry out and remain edible into the winter. 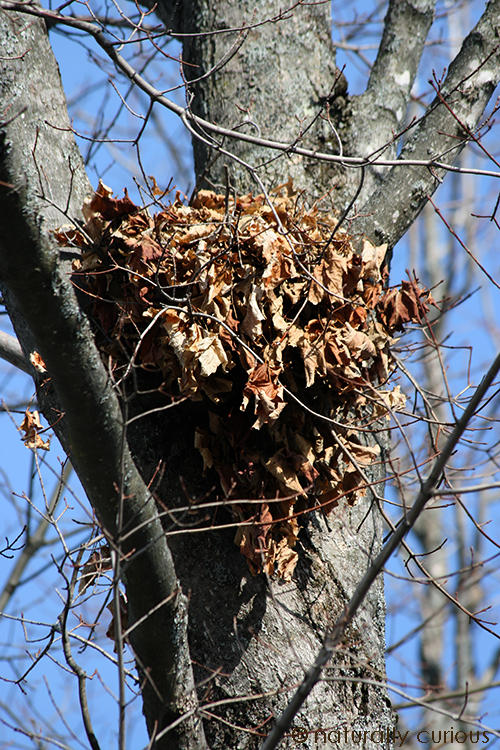 With most deciduous trees having lost their leaves, squirrel nests, or dreys, are more noticeable. Red Squirrels, Eastern Gray Squirrels and Flying Squirrels all build dreys. Those of the Red Squirrel are round, grassy balls, 8” – 10” in diameter. In contrast, Gray Squirrel nests are usually larger and made of sticks and leaves. Flying Squirrel dreys are so high that they are rarely observed.

The dreys most commonly seen are made by Gray Squirrels. Usually 30 or more feet high, these shelters are typically built near the main trunk of the tree, in a crotch where several small branches meet, or on a strong, thick limb. Construction takes place in the summer or early fall, before trees have formed the abcission layers that cause leaves to separate and fall from branches. Therefore, the leaves on a drey’s branches tend to remain for quite some time, forming an effective water-shedding outer layer.

Branches are loosely woven into a foot-wide hollow sphere. The drey is lined with insulating grass, moss, leaves, and shredded bark. Usually there is one entrance/exit hole, facing the trunk (so as to keep rain out). Often squirrels build two dreys, giving themselves another shelter option should one nest be disturbed by a predator or overrun with parasites.

A drey is usually inhabited by one squirrel, but two are known to occupy a single drey in order to keep warm in the winter. Gray Squirrels give birth in late winter and again in the summer. A more protective tree cavity usually serves as a nursery in the winter, and the drey in summer. The average drey is only used for a year or two before it is abandoned. 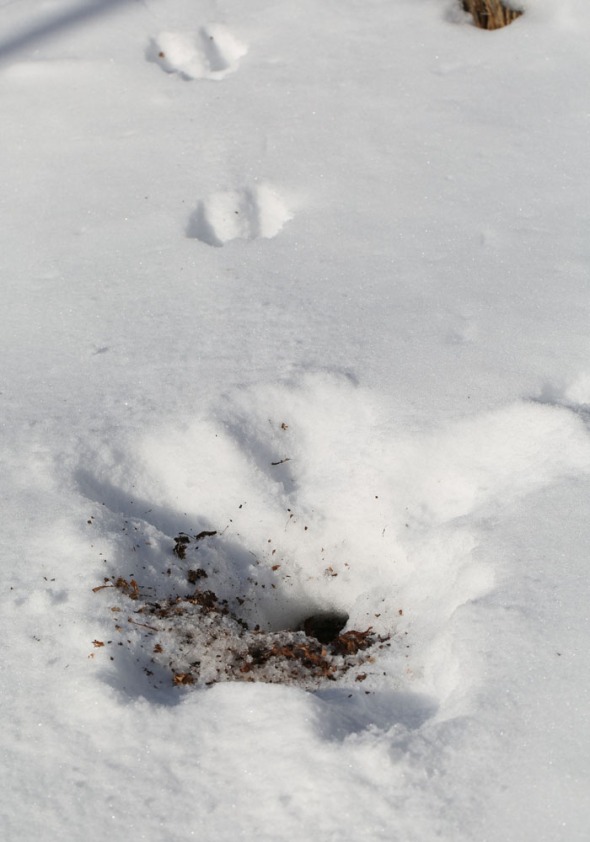 If you have oak trees in the woods near you, chances are great that their acorns attracted wildlife this past fall, one of which was most likely a Gray Squirrel. Unlike Black Bears, Wild Turkeys and White-tailed Deer, which eat acorns immediately upon finding them, Gray Squirrels tend to cache acorns for winter consumption. They do so by burying them individually, often in fairly close proximity to where they find them. (Red Squirrels also cache food in the fall, but typically bury numerous seeds, mostly conifers and maples, in one spot.) When food becomes scarce, as it usually does this time of year, it is possible to find numerous holes dug in the snow, frequently with leaves and bits of acorn shells littering the snow around them. Tell-tale Gray Squirrel tracks leading to and from these holes identify the excavator. 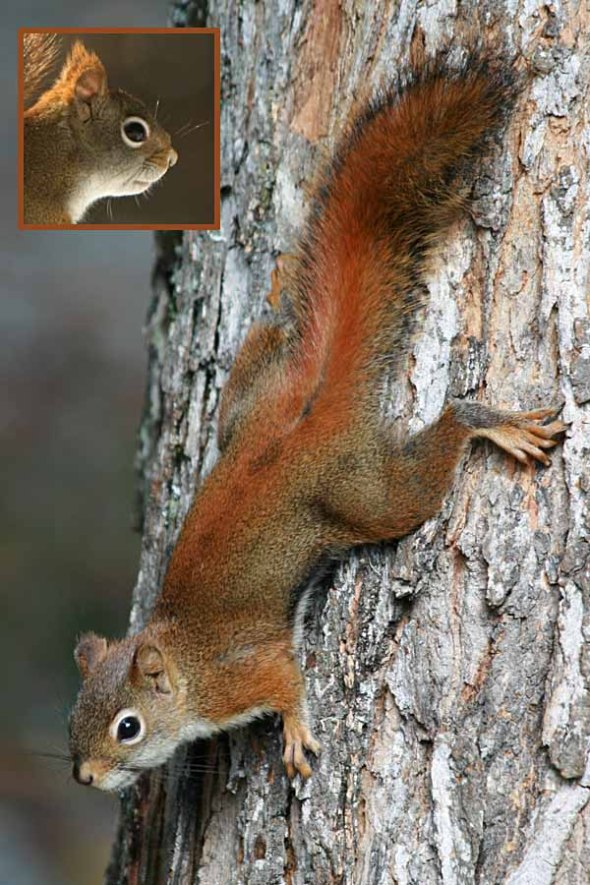 There is a marked seasonal difference in the Red Squirrel’s appearance due to its two annual molts (spring and fall). In the winter, a broad rusty-red band extends along its back, from its ears to the tip of its tail. The Red Squirrel’s thicker winter coat also includes ear tufts, which no other species of squirrel in the Northeast possesses. Come spring, when the squirrel sheds again, it loses its ear tufts and its new coat is closer to an olive-green color than red.

In the fall, Eastern Gray Squirrels bury individual acorns from Red and White Oaks to sustain themselves through the winter. The acorns of Red Oaks have delayed germination – they can be stored up to six months before they start germinating. The acorns of White Oaks, however, have no such dormancy, and begin to germinate in the fall, soon after they fall from the tree. Once acorns sprout, they are less nutritious, as the seed tissue converts to the indigestible lignins that form the root. Gray Squirrels, as a means of “long-term cache management,” selectively remove the embryos from White Oak acorns (but not from Red Oak acorns) before burying them. Germination is prevented, and the storage viability of the White Oak acorns is extended by six months, equaling that of the Red Oak acorns.

…and a Happy and Healthy New Year!