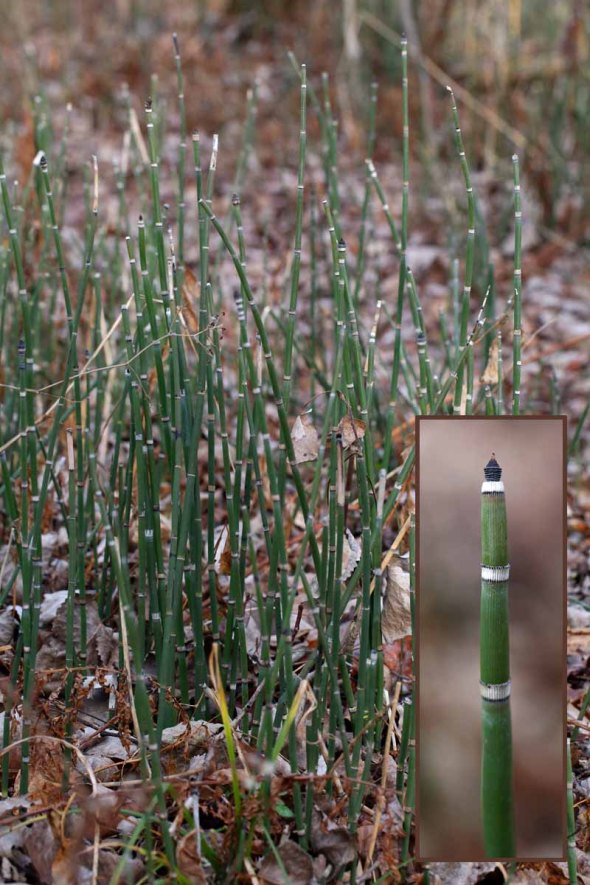 Scouring Rush (Equisetum hymale) belongs to a group of non-flowering, spore-producing plants that are known as horsetails. The group is named after some of the species in it that are branched, and were thought to resemble the tails of horses. There are several species of horsetails, including Scouring Rush, that do not branch. Three hundred and fifty million years ago horsetail relatives dominated the understory, with some individuals growing as high as 100 feet.

Scouring Rush’s rough stems terminate in a pointed cone within which spores develop. Their evergreen, hollow stems are jointed (stem can separate easily into sections by pulling at joints) and their leaves have been reduced to small sheaths encircling each joint. Scouring Rush is often found near streams and ponds, and can form large colonies.

The stems of all species of horsetails contain silica. Those of Scouring Rush, as one might gather from its name, were bundled together and used as a fine abrasive for scouring pans. In addition, they were used for sanding wood and smoothing reeds for woodwind instruments.

Look for this perennial non-flowering plant by the side of the road, where its fertile stalks are starting to poke up through the soil.  A relative of ferns, horsetail reproduces by means of spores which are located in the cone-like structure at the tip of the fertile stalk.  The green, bristly vegetative stalks that give this plant its common name will soon appear. Horsetail’s use as an herbal remedy dates back to ancient Roman and Greek medicine. It was used traditionally to stop bleeding, heal ulcers and wounds, and treat tuberculosis and kidney problems. Because of the silica in this plant, horesetail is used today by organic farmers to rid soil of the effect of excess moisture that promotes the growth of fungi. Relatively recently horsetail has been suggested as a treatment for osteoporosis, also because of the silica it contains, a mineral needed for bone health.