Abbott’s Sphinx Moth larvae feed on grape and Virginia creeper leaves during the night. During the day they tend to rest on the woody vines of the plants they are eating, and because they are well camouflaged, they remain hidden from most humans’ eyes. Both as larvae and adults, these moths are well equipped for survival. Older larvae have two color forms, one resembling unripe green grapes (in photo), and the other is brown and looks much like a branch. In their last stage, or instar, both forms have a rear eyespot which looks like a human eye, right down to the white reflection spot in it, which scares off potential predators. If the caterpillar is pinched or prodded, it squeaks and tries to bite the attacker. The adult moths, which emerge next summer after pupating all winter, also defend themselves with both color and behavior. They are brown with yellow bands on their underwings, which make them look something like a bumblebee, and when they fly, they create a buzzing noise. (Thanks to Heidi, Tom and Simmy Wetmore for photo op.) 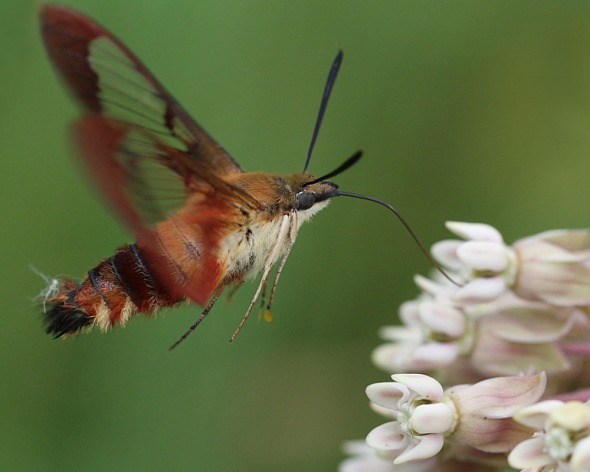 Of all the insects I’ve found in milkweed patches over the years, the Hummingbird Clearwing is one of my favorites. It is a species of sphinx moth, named for its habit of hovering at flowers while it gathers nectar with its proboscis in a manner similar to that of hummingbirds. In fact, they are often mistaken for hummingbirds. The transparent wings, light brown thorax and dark chestnut abdomen are the field marks to look for. A diurnal moth, the Hummingbird Clearwing can often be found during the day in milkweed patches.

Sphinx moths (also known as hawk moths, and the larvae as hornworms) are a group of long-tongued moths that possess the most acute color vision of any animal. The larvae possess a “horn”, eyespot or hard button on their abdomen. (The tobacco hornworm and tomato hornworm are sphinx moth larvae.) The larva of the Blinded Sphinx moth (Paonias excaecatus) is the most common sphinx moth larva in many of New England’s woods.  Its bright green color and granulated skin may camouflage it amongst the leaves of the oak, hop hornbeam, cherry and poplar trees that it eats, but when crawling on the forest floor, as this one was, it’s hard to miss.  The larva burrows into the soil in the fall and pupates. An adult moth emerges the following summer and mates, but does not feed. This moth ‘s name refers to the fact that the small blue spot (or “iris”) on the hindwing has no central black spot (or “pupil”)  and is therefore “blind.”  The spots of the similar Twin-spotted Sphinx (Smerinthus jamaicensis)  has a black “pupil” which allows it to see.  p.s. Old habits die hard — I will continue to post whenever time allows!

The blinded sphinx moth, Paonias excaecatus, is a member of the Sphingidae family of hawk moths.  Most of this family’s larvae possess a horn at the tip of the abdomen.  The tomato and tobacco hornworm larvae are members of this family, as is the hummingbird clearwing moth.  The blinded sphinx moth has strongly scalloped margins on its forewings and a single blue eye spot on each of its two hind wings (which don’t show if the moth’s wings are folded).  Its common name derives from the fact that these “eyes” have no pupils.  In its larval stage, the green larva eats the leaves of  many deciduous trees, including willow, birch, poplar and cherry; the adult moth does not feed. After pupating underground, the adult moths emerge and mate.  Males (pictured) rest with their abdomen curved upwards.