Some Spiderlings Hatch in the Fall

Have you recently noticed a roundish, flat, papery, 1/4-inch diameter, metallic-looking structure adhering to the top of a rock? If it has tiny bumps in the center, chances are good that it’s a spider egg sac, most likely that of an antmimic spider (spiders resembling ants that often prey on ants), specifically one in the genus Castianeira. One would assume that the contents of the sac that were causing the bumps were eggs that were going to overwinter and hatch once warm weather arrives. This is true for a majority of spider egg sacs, but some, including those of Black-and-Yellow Argiopes and antmimic spiders, hold spiderlings that have already hatched and will remain in the sac throughout the winter. As long as the temperature stays cold, the spiderlings will be safe and secure until spring. If we have periods of cold interspersed with periods of warmer temperatures, or an exceptionally warm winter, the spiderlings will become active when the thermometer rises, and, not having any insects to eat, will be forced to devour each other. 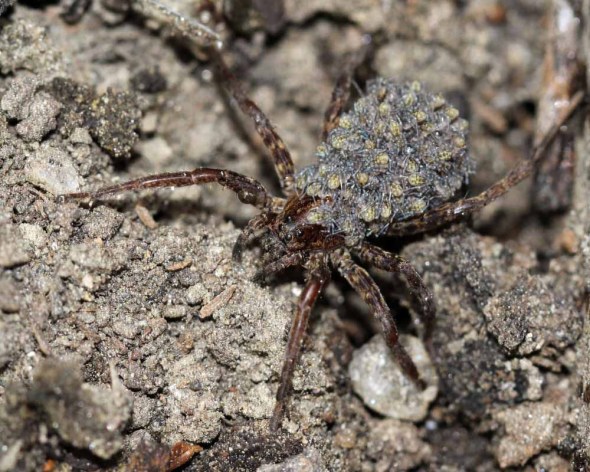 Two common spiders that we often see carrying their egg sacs are the wolf spider and the nursery web spider. Wolf spiders attach their egg sacs to their spinnerets, whereas nursery web spiders carry them with their mouthparts. When nursery web spiders are about to hatch, the mother puts her egg sac into a silk tent she has spun, and they live there for a week or so. When a wolf spider’s spiderlings emerge from their egg sac, they climb up onto their mother’s abdomen and cling to it while their mother continues to hunt for food. After about a week, when partially grown, the spiderlings disperse, either by ballooning through the air on silk strands or simply by scurrying off along the ground.