American Basswood (Tilia americana) is known for the alluring scent and abundant nectar of its flowers, as well as its lightweight, odorless wood which lends itself to the production of food crates and boxes, musical instrument parts, yard sticks and cabinets.  Equally distinctive are the nutlets that are borne on a stem bearing a persistent bract, or modified leaf, that aids in the wind dispersal of the fruit.

Most of the nutlets are eaten in the fall by chipmunks, mice, squirrels, porcupines and rabbits, but some persist until winter winds detach them from the tree and they fall to the ground. Basswood trees are not as dependent on seed germination as many other species due to their ability to put out new shoots from their stump or roots if cut down or damaged (self-coppicing). 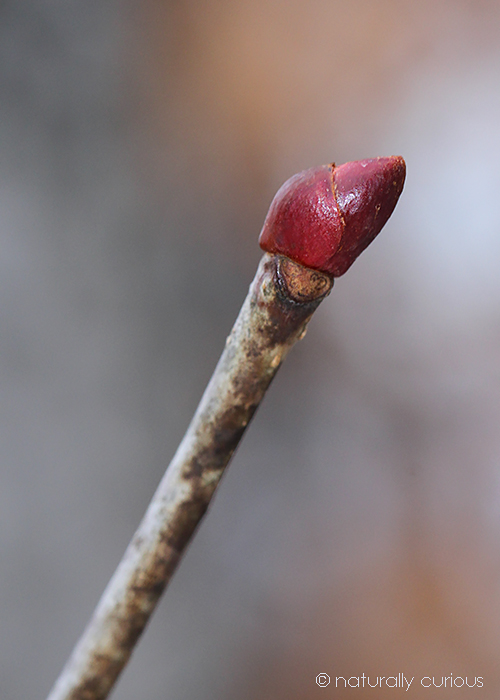 Bark, silhouettes and buds are the three keys to identifying trees in winter. Buds of different tree species are so distinctive they are an excellent identification tool. American Basswood, also known as American Linden,  (Tilia americana) has plump, oval, asymmetrical reddish or green buds, which bear only one or two bud scales.

Much of this coming summer’s woody plant growth is contained in embryonic form inside a tree’s buds. Buds contain an undeveloped shoot, leaf, and/or flower. Formed last summer, these buds must survive the freezing and fluctuating temperatures, relatively dry air and the potential insect, bird and fungal damage that may occur during the fall, winter and early spring.

Bud scales, which are small, modified leaves, cover and protect many of these buds. The number of scales, their arrangement, color, presence or absence of hairs or sticky substances are often distinctive. Willows have one visible bud scale (actually two fused into one), whereas pine and fir buds may have anywhere from 100 to 350. The scales on a bud can either be arranged in pairs facing each other edgewise (American Basswood, pictured) or overlapping like shingles (Sugar Maple, pictured). Colors range from the wine-colored bud scales of Striped Maple to the mustard yellow Bitternut Hickory scales. The texture of bud scales has great variation, including the satiny-smooth hairy bud scales of Box Elder (pictured). Many bud scales, such as poplars, are covered by a gummy substance which serves as added protection.

A few trees and shrubs have buds that lack scales. These are referred to as “naked” buds, and often the embryonic leaves are quite hairy. Witch Hazel, Hobblebush and Staghorn Sumac (pictured) are species of woody plants lacking bud scales.

Most buds have multiple scales which, upon falling off when the bud opens, leave a series of horizontally-elongated scars on the surface of the growing stem. By means of these scars one can determine the age of a young branch, since each year’s growth ends in the formation of a terminal bud which produces an additional group of bud scale scars. Continued growth of the branch causes these scars to be indistinguishable after a few years so that the age of older branches cannot be determined by this means. 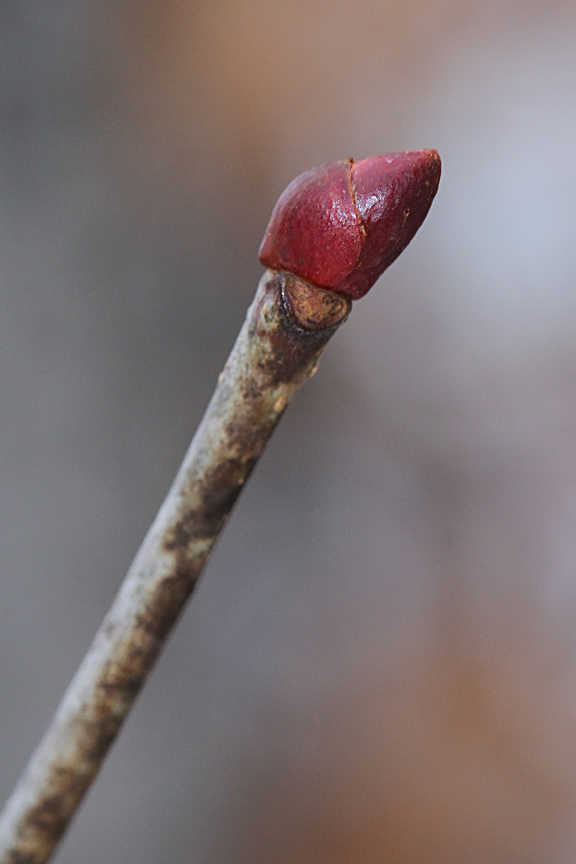 Bark, silhouettes and buds are the three keys to identifying trees in winter. My preference is buds, as they are so distinctly different from one species to the next. American basswood, or linden (Tilia americana), is a favorite. Its plump, oval, asymmetrical red buds, bearing only one or two bud scales are unmistakable. 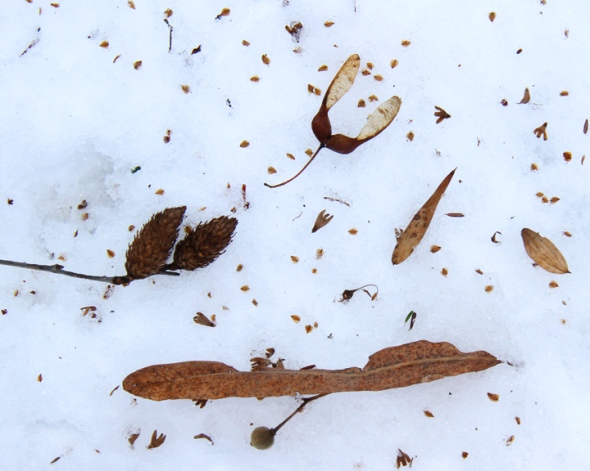 One nice thing about having the ground covered with snow in October and November is that there is an additional tool available for tree identification.  Like all flowering plants, trees have fruits which contain seeds.  The fruits of many trees fall to the ground this time of year.  They are very helpful identification tools, especially when they are so obvious against the white snow.  In the photograph, there are fruits from five different trees:  starting at the top and going clockwise is the fruit of the sugar maple (Acer saccharum), referred to as paired samaras by botanists.  Each of the two seeds contains a papery wing that aids in dispersal.  Next is the fruit of the white ash (Fraxinus  americana), which has winged seeds borne in clusters.  Eastern hophornbeam’s  (Ostrya virginiana)  fruit is a cluster of papery bladders, which usually separate upon dispersal.  Each bladder contains a seed.  Along the bottom is the fruit of American basswood or linden (Tilia americana) ; several round seeds are borne on a stalk which is attached to a single modified leaf.  The last two clusters are the fruit of yellow birch (Betula alleghaniensis). They consist of structures that look like little bird feet (of which there are several in the photograph) that contain individual, tiny winged seeds (scattered throughout the photograph).