If you find a blossoming Trout Lily in the woods it is quite likely that you will also find one of its most common pollinators, the Red-necked False Blister Beetle (Asclera ruficollis), on it. Ardent pollen eaters, this group of beetles obtain their common name because many species cause blisters when pinched or squashed against skin. Adults mate on flower heads during pollen feeding. Both sexes feed on pollen, which acts as an attractant, but the female will not accept the male until her gut is packed full of pollen. She stores the pollen in a special intestinal sack in which an enzyme causes the pollen to partially germinate — this causes the indigestible covering of the pollen grain to rupture. She then digests the contents of the pollen grain, which she uses to manufacture eggs. 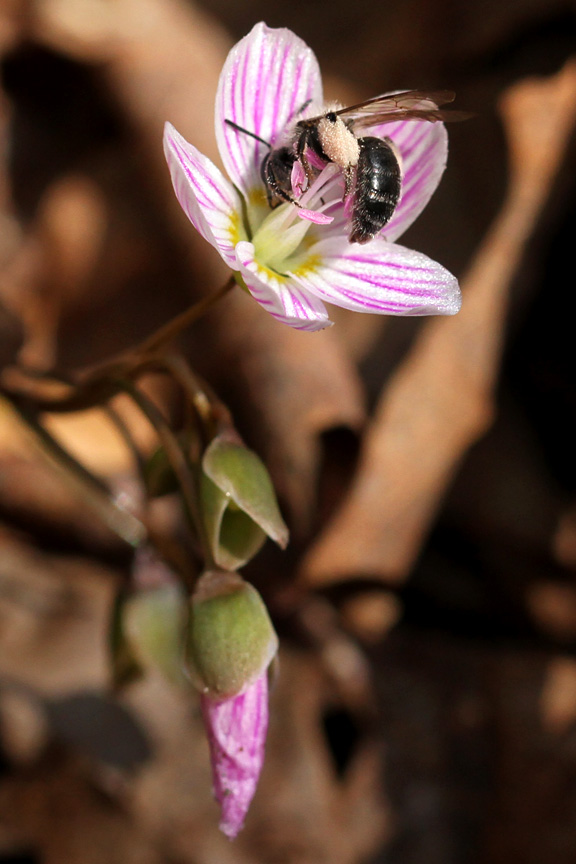 Spring Beauty (Claytonia virginica) is one of our earliest woodland wildflowers to blossom, and thus an important source of nectar and pollen for the earliest foraging insects.  Pink lines (“bee guides”) on each of its five petals lead pollinators to the center of the flower, where the nectar is located. The pollinator in this image, Andrena erigeniae, is one of the more common species of bees that visits Spring Beauty in the early spring.  Notice the slightly pink pollen she has gathered into the pollen basket on her hind leg.  If you’re interested in spending time observing the series of different insect pollinators that visit Spring Beauty as the season progresses, there’s a golden opportunity for you.  If you go to http://springbeauties.wordpress.com/ you can participate as a citizen scientist volunteer and participate in their survey.

All members of the Poppy family have milky or colored sap, and Bloodroot (Sanguinarea canadensis) is no exception.  Its sap is as red as its petals are white, and was used as a source of dye by Native Americans (for clothing and baskets) as well as for paint and as an insect repellent.  The individual flower of Bloodroot  lasts only two days, but on these two days, it reigns supreme amongst the early ephemerals.