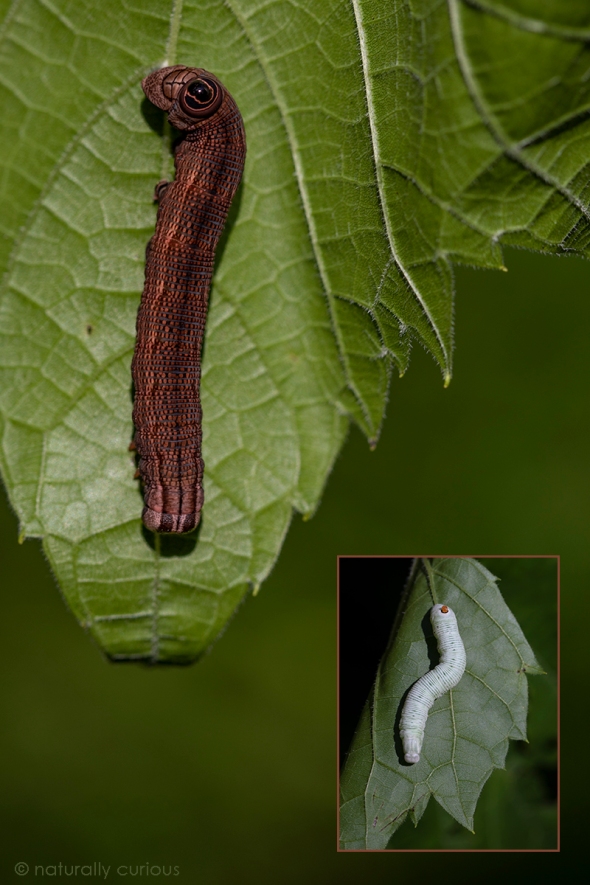 The larvae of sphinx moths, commonly called hawk or hummingbird moths, are easily recognized by the horn, eye spot or hardened button that is near the tip of their abdomen.  Most readers are probably familiar with the larval stage of tobacco and tomato hornworms (Carolina Sphinx Moth and Five-spotted Hawk Moth, respectively) which are found on tomato plants. A less observed sphinx moth, Abbott’s Sphinx Moth (Sphecodina abbottii), can be found on grape and Virginia creeper vines.  As a larva it molts several times and assumes three different appearances by the time it pupates.

Abbott Sphinx Moth larvae start out green, with a horn near the tip of their abdomen, like most other sphinx moths. However, when they are about half-grown, they turn blue-green and the horn develops into an orange knob (see inset).  In the last stages before they pupate, the larvae molt and the knob turns into an “eye,” complete with a black pupil and encircling iris.  The finishing touch is a white reflection spot that makes the eye appear moist and shiny.  At this point, the larvae may be either brown with a “wood-grain” pattern (resembling grape vines, a host plant) or brown with ten pale green saddles along the back (thought to resemble grapes).  Pictured are the second and third stages of a brown “wood-grain” Abbot’s Sphinx Moth larva.