There is a group of fungi known as tooth fungi, due to the fact that they produce spores on tooth-like projections, not pores or gills.  Bear’s Head Tooth Fungus, Hericium americanum, also known as Lion’s Mane, Monkey Head or Icicle Mushroom, is a tooth fungus that is fruiting now.  This delicious (its taste is somewhat reminiscent of lobster) fleshy fungus is among the safest, most unmistakable of all of North America’s species of edible wild mushrooms; it looks like a cluster of white fungal icicles hanging off a decaying log, stump, or dead tree trunk.  Bear’s Head Tooth Fungus fruits on a number of different kinds of deciduous trees, particularly beech, maple, birch, oak, walnut, and sycamore.  Distinguishing between the species of Hericium can be tricky, but all species are edible and tasty.  Even so, I recommend having someone very familiar with edible fungi along to confirm identification the first time you harvest it.  (Thanks to Peter Stettenheim for photo op.)

Jumping spiders are aptly named as they can spring more than 50 times their own body length to land on unsuspecting prey. They hunt actively rather than catching prey in a web and they have excellent vision, with four big eyes in front and four smaller eyes on the top of their head.  Jumping spiders have three-dimensional vision which allows them to estimate the range, direction and nature of potential prey, essential skills for a predator that catches prey by pouncing on it.

Pokeweed (Phytolacca americana) has been used by many people for many things over the years.  Native Americans used it to treat cancer, rheumatism, itching, and syphilis. They also ate young pokeweed shoots, which contain very low levels of toxins compared to the rest of the plant (and they boiled them several times).  At one time, juice from the berries was once used to make ink and dye.  Even today it is still used — by the food industry to make red food coloring and by farmers to reduce the swelling of cows’ udders.  Research has shown that pokeweed contains a compound that appears to enhance the immune system.  It has had some anti-cancer and antivirus effects in animals.  Herbalists use Pokeweed for all kinds of ailments, from hemorrhoids to bad breath.  Note: all parts of Pokeweed are poisonous, particularly the roots.

There are three fairly well-known galls (abnormal plant growths caused by a variety of organisms) on goldenrod – the goldenrod ball gall (round swelling in stem caused by a gall fly), the goldenrod bunch gall (leaves at top of plant are bunched up into a mass caused by a gall midge) and the goldenrod spindle gall (elliptical stem swelling caused by a moth).  The amazing thing about insect galls is that not only do they provide shelter for the insect, but they are nutritious and serve as the insect’s food supply as well.    The spindle-shaped galls are home to the larval stage of the goldenrod gall moth (Gnorimoschema gallaesolidaginis).  In the late fall the adult female moth lays an egg on a low goldenrod leaf, where it overwinters. The larva, or caterpillar, hatches out the following spring and makes its way from the now dead leaf to a newly sprouted goldenrod, where it eats its way through a bud and into the stem.  The goldenrod plant reacts to this activity by forming an elliptical swelling, or gall, around the area where the larva took up residence. The larva feeds and develops all summer.  Prior to pupating, it chews a tunnel all the way through the gall (this is the only stage in which the moth has chewing mouthparts), and then spins a silk cover for it.  The larva then returns to the cavity in the middle of the gall and pupates.  In the fall the adult moth crawls down the tunnel,  bursts through the thin layer of silk and then mates and lays eggs. 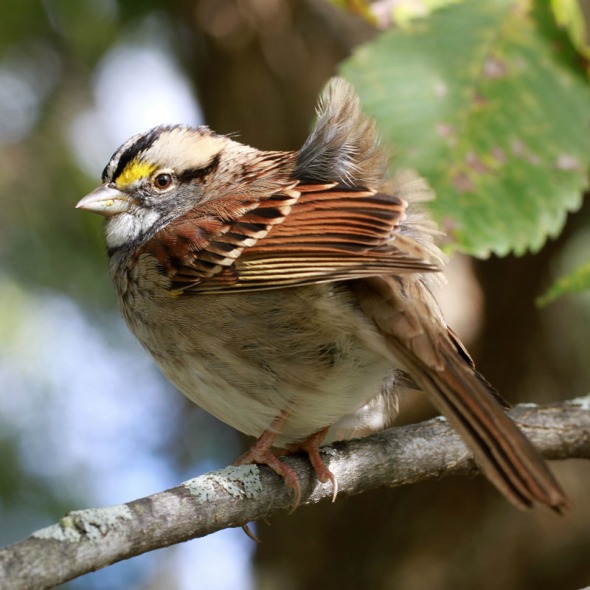 White-throated Sparrow (Zonotrichia albicollis) numbers are building in northern New England as they head towards the mid-October peak of their migration south.  Even though they are no longer constantly singing their “Poor Sam Peabody-Peabody-Peabody” song, which allows quick  identification, White-throated Sparrows’ white throats, striped crowns and yellow lores (the area between the eye and the bill) make them one of the easier sparrows to identify.  Don’t be surprised if you see this bird with a tan, and not white, crown.  There are two color forms, white-crowned and tan-crowned.  Interestingly, an individual bird almost always mates with a bird of the opposite color form. Males of both color types prefer females with white stripes, but both kinds of females prefer tan-striped males.

You could hardly be blamed for not recognizing that this bright yellow-green, half-inch-long, oval creature is the larval stage of a moth!  Possessing suction cups rather than prolegs, the Yellow-shouldered Slug (Lithacodes fasciola) glides, rather than crawls, over the leaf it is consuming.  Perhaps this is why these caterpillars show a preference for smooth-leaved trees and shrubs such as basswood, beech, cherry, maple and oak (although this particular individual was found on a witch-hazel leaf).  The Yellow-shouldered Slug pupates inside a cocoon all winter, and in the spring a small, brown moth emerges. 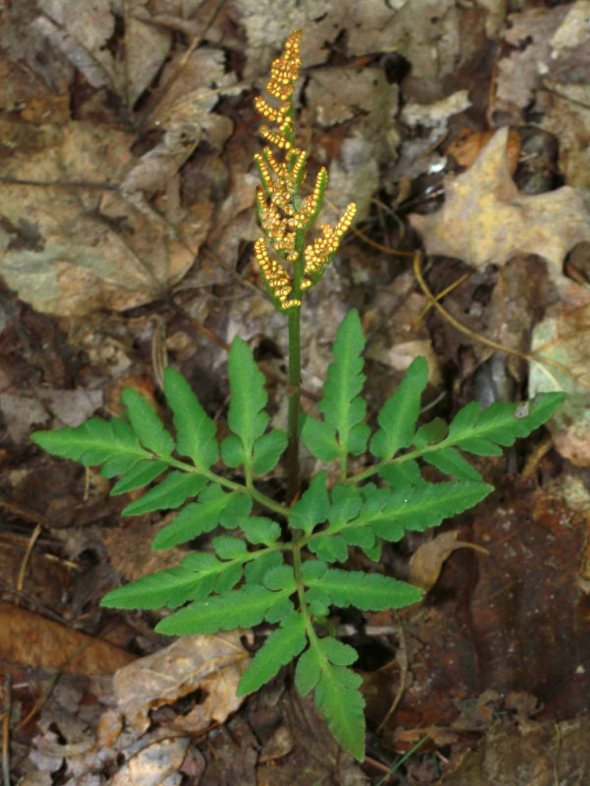 There are several species of Grape Ferns in the Northeast, all of which are true ferns, but they are not closely related to the plants we generally think of as ferns. Like other ferns, Grape Ferns do not have flowers; they reproduce with spores, not seeds. A single shoot divides into two blades – one of which is sterile and does the photosynthesizing, and one of which is fertile and bears spores. It is the resemblance of this plant’s clusters of spore cases to miniature clusters of grapes that gives this group of ferns its name. Cut-leaved Grape Fern, Botrychium dissectum, (in photograph) is one of the most common species of Grape Ferns in the Northeast. It’s roughly 6” to 8” tall, evergreen and has yellow spore cases and spores which are mature at this time of year.