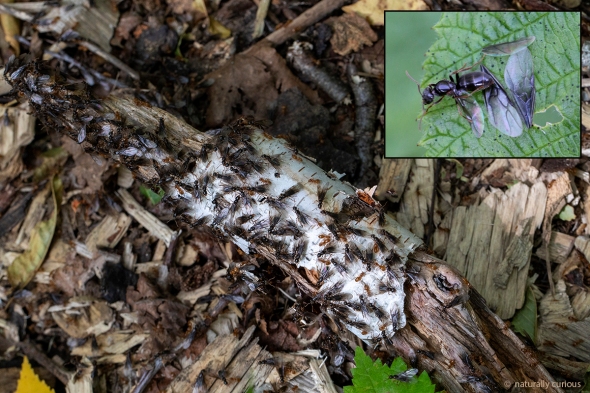 Ant colonies consist of one or more queens, female workers and males.  In most species, only the males and queens have wings.  Periodically the winged ants emerge from the colony in large swarms in order to mate.  Swarming behavior is usually synchronized with other nearby colonies, so large numbers (hundreds or thousands) of winged ants suddenly appear.  After mating, the males die and the queens chew their wings off and use the remaining wing muscles as a source of nutrients during the early stages of establishing a colony.

(Photo:  A swarm of ants gathering as they emerge from their ground nest. The pictured (inset) ant has removed three of its four wings and is in the process of removing the fourth wing. Thanks to Alice Trageser for photo opportunity.)

Naturally Curious is supported by donations. If you choose to contribute, you may go to http://www.naturallycuriouswithmaryholland.wordpress.com and click on the yellow “donate” button.  (NB:  The “Donate” button on the Naturally Curious blog is currently not working. If you would like to donate to this blog, you may send a check made out to Mary Holland to me at 505 Wake Robin Drive, Shelburne, VT  05482.)